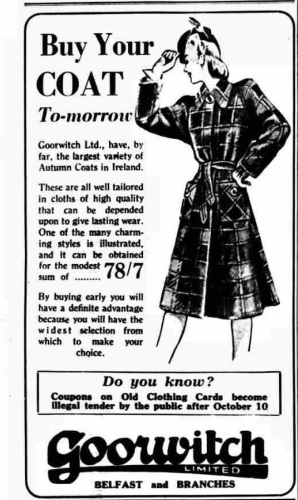 This week my blog posts will concentrate on the lives of Irish women during World War Two. This is a particular area of interest as I have a long time interest of the roles of women during World War Two; particularly the lives of ordinary women on the British or Irish Home Front. This blog post looks at what effect rationing had on the lives of Irish women and how they managed to continue as ‘normal’ despite shortages and stress over loved ones away at war. 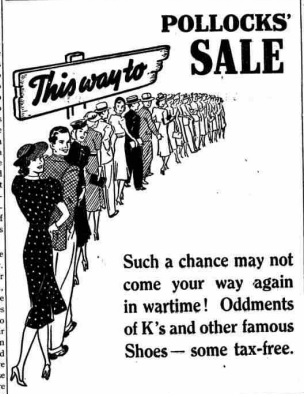 Clothes Rationing – the bane of everyone’s existence in World War Two and beyond especially fashionable women or women with large family’s. Clothes Rationing was introduced in the North of Ireland in 1941 and Southern Ireland in 1942. Points from both systems for various items differentiated dependent on what was available both locally and as imports. Luxury goods that where made in Ireland were not widely available to the general public e.g. Tweed, Wool, and higher-end linen garments etc. as these were made for the export market to aid tax. Your Donegal Tweed or Moygashel linen dress had to last a lot longer than you originally thought!

Advertisements and advice columns appeared in papers for ‘Make Do and Mend’ ideas for clothing, furniture, food, curtains. etc. Everything and anything could be re-made into something new to get another life out of an item and to avoid using precious clothing coupons. The Northern Whig of 16th January 1940 (pre-empting rationing!) advertised making dolls clothes for children out of odds and ends of wool and fabric scraps. In the Larne Times of 7th June 1941 there is an article on how clothes rationing will affect the clothing trade with the noticeable lament that the evening dress will be replaced by afternoon frocks once they were worn out. The Londonderry Sentinel of 30th June 1945 discusses that clothes rationing was to get worse after the war instead of better as clothing was to be given to war refugees and returning soldiers. Indeed, clothes rationing continued into 1948 in Great Britain much to the frustration of the fashionable woman! 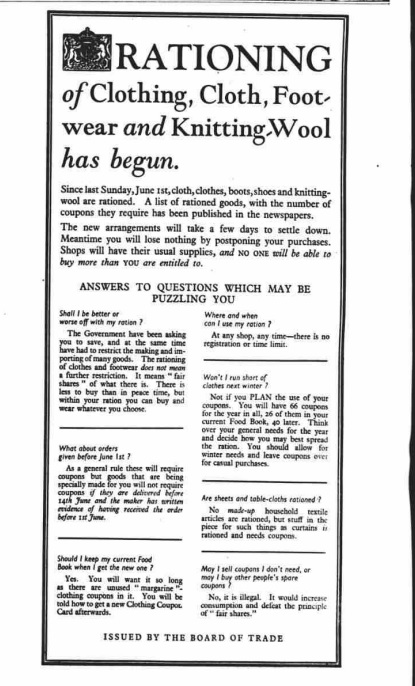 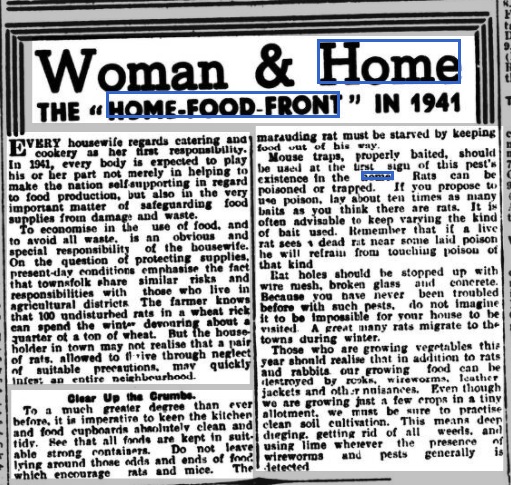 This article is taken from Wicklow People from 15th February 1941. It is worth remembering that even though Southern Ireland was at war the war affected people in this part of Ireland as much as it did in the north. They might not have been fighting (though many did) but they still had to ration food and clothing. This is something that unfortunately a lot of historians who write about the British Home Front forget (including one recent book I read that said Southern Ireland had no rationing!); Irish people suffered greatly due to a lot of imports coming from Great Britain and Europe that were affected by war.

This advice column gives advice on how to economize with food and how to keep your kitchen clean to avoid food waste through rats or mice eating your food. It also contains advice on how to grow fruit and vegetables and echoes the ‘Grow Your Own’ campaign of the British Home Front. 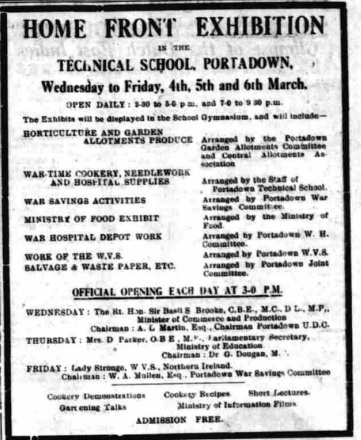 But what if you weren’t a kitchen savvy housewife with excellent sewing and household management skills? Where could you turn? Whom could you ask for advice? Fear not the women of Ireland have your back with the ever popular Home Front exhibition!

These exhibitions are a regular feature in the North of Ireland with several being featured in a newspaper archive search I completed. Between 1941-1944 there appeared to be at least twelve of these exhibitions across the six counties. This one advertised in the Portadown News on 21st February 1941 advises the reader that there is war-time cookery, needlework, war bond saving, and demonstrations of poultry cooking etc. amongst the various exhibitions on offer. These exhibitions were normally run by members of the local Women’s Voluntary Service (W.V.S), Women’s Institute or equivalent, or local women who were used to running Church Fairs and such like entertainments. It’s worthwhile noting that not just older women ran these exhibitions but young women in schools also ran them as away of contributing to the war effort when perhaps they were too young to join any of the British armed forces female auxiliary unit’s.

This is one such example run by the female students of Larne Grammar School with a local male dignitary stating that ‘without women the war effort would be a failure.’ This person, and other dignitaries in attendance, go onto state that without women saving war bonds, making do and mending, providing food to neighbors and evacuees, or attending various committees for war relief the war would have been a less pleasant place to be. That the women of the North of Ireland were key in getting victory of the allies; and that anything else was a victory for Hitler. Strong words from a man looking a vegetable display who ordinarily in the pre-war era possibly thought a woman’s role was in the home with little interference into ‘outside’ life. The aftermath of how women in Ireland were treated in the wake of the end of World War Two in 1945 differed geographically; those in the North of Ireland could anticipate some, but maybe not much, more freedom than before 1939. Whilst those in Southern Ireland possibly did not find much difference if they had not taken part in the Home Front either through organizing activities or joining some of the British female auxiliaries. Come back on Friday to read about a more in-depth look at the W.V.S in the North of Ireland!