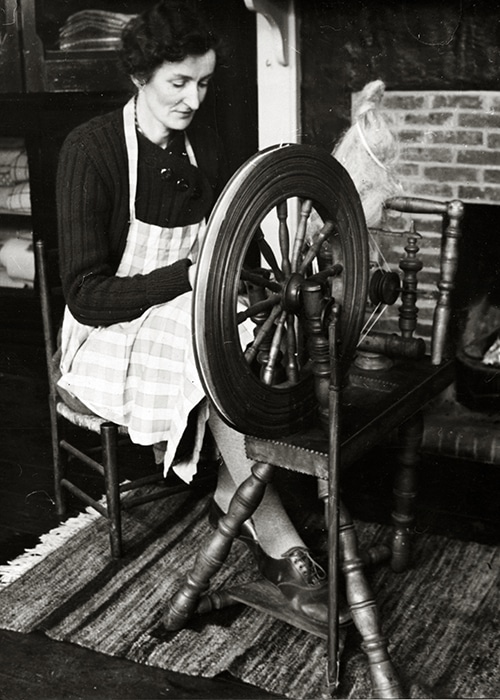 The image of a traditional Irish woman; a home-maker, mother, traditionalist, and industrious provider for her family in times of need. Although if you look carefully enough this woman (we do not know if she was ever a mother; as like a lot of Irish women she is an anonymous woman from history)she appears to have the remnants of a permanent wave and is wearing silk stockings. This image sits somewhat at the intersection of traditionalism and modernism; this Irish woman is working at a traditional industry, spinning wool,  but is sporting a modern hairstyle and silk stockings. Read on to find out how women in 1930s Ireland grappled with and experienced both traditional and modern modes of femininity. 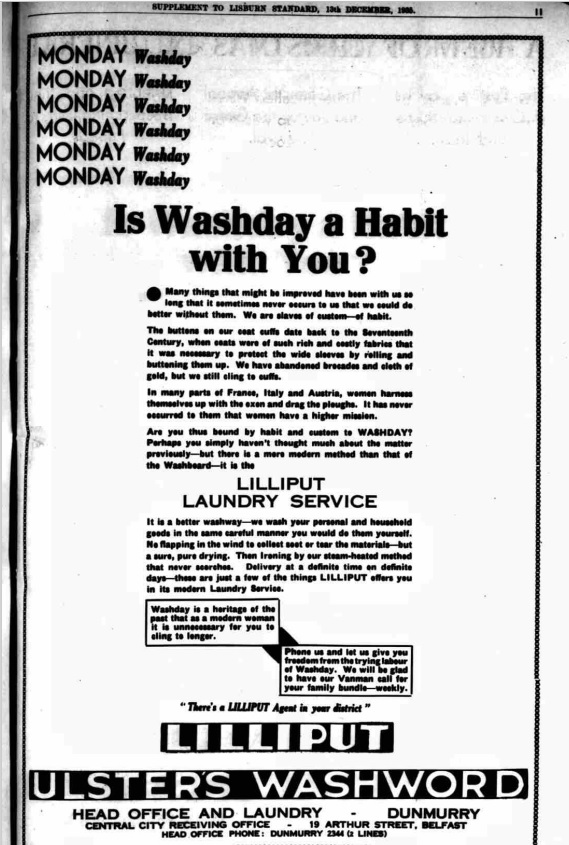 This advert from the Lisburn Standard of 13th December 1935 decrees that;

That Lilliput Laundry Service can come to the rescue of the maligned modern mother to relieve her of the ‘burden’ of washday so that she may commit to a ‘higher purpose.’ Though what this higher purpose is is left to the imagination of the reader. Could the purpose be that she is a business woman or writer or teacher but also with a family to run? Undoubtedly, she would avail of Lilliput’s services being a ‘modern woman’ of 1930s Ireland. She did not want to be seem to be a drudge of the past by hand-washing her own clothes!

Though one must remember this type of service was not available to all women, modern or otherwise. This sort of laundry service was available possibly only to those of the Middle and Upper Classes of 1930s Ireland. The average working-class mother still had the drudgery of Monday (and all day Monday) being the wash-day for a possibly large family and if means were tight the mother may take in washing in for other people whom live near her.

This paradox of modernity and traditionalism is rife in 1930s Ireland with newspaper and magazine advertisements highlighting the joys of modern lifestyle but not too modern lest women step out of their traditional modes as mothers and wives. Although often enough there are profiles of business women, university lecturers, aviatrixes’ etc. alongside the adverts for soap flakes and OXO cubes. As a 1930s woman I would be confused in the meaning of these messages; I could go to University but ultimately society sees my function as a wife and mother? What if I want to work after marriage even if marriage bars prohibit me to do so?

The personal aspirations for women in 1930s were rarely if ever taken into head as the decade wore on and laws were passed that re-trenched women’s rights sorely won for in the earlier part of the 20th Century. In 1932, a marriage bar prohibited women working as teachers and civil servants after marriage (though not doctors and nurses!), a law was enacted that made contraception illegal. These marriage bars echoed marriage bars in teaching and the civil service in the North of Ireland and were keenly felt by educated women who found themselves giving up jobs they loved.

All this re-trenchment was heading towards the final knell in the rights of women with the introduction of Article 41:2 of the 1937 Irish Constitution that inexorably placed women’s role in the home and family. Unsurprisingly, politicians at this time were influenced by the teachings and tenets of not just the Catholic church but other religious denominations. Article 41:2 effectively put women’s rights back to the end of the 19th Century with little to no let up until at least the 1970s.

Whilst the ‘modern woman’ in Ireland could look fashionable in her home-made dress as seen in the advertisement for the Modern Woman she may also have had on her mind where she could wear this dress after marriage if not being able to wear it to the office? Would she have opportunities for leisurely sewing and dress-making once she started having children? These magazines may seem antiquated now to our modern eye but offered the house-bound mother and wife a glimpse into modernity and all that it could offer a modern mother and woman.

Whilst many modern women could not afford a vacuum cleaner, expensive laundries, or even daily help magazines and newspapers offered them a respite as they went about their day. They could offer up helpful hints and tips for recipes, cleaning, rearing children, and making fashionable clothes on a budget. They could also afford the reader a sense of escapism as many magazines featured serial stories and articles that offered again some respite from a busy domestic life in the pre-electrical convenience era we now take for granted.

This type of modernism is described as ‘domestic modernism’ and is somewhat overlooked by scholars of ‘modernism’ but I argue that even though Irish women had misgivings about their position in 1930s society their contribution to modernist history is just as important as their artist or authors counterpart. These women held the fort at home during a turbulent decade in world history by providing comfort and joy in a modern way through modern techniques in child rearing, cleaning, and cooking hence the term ‘domestic modernism.’ I hope this short blog post has given you a very quick glance at a topic that fascinates me and is again somewhat overlooked in 1930s Irish history; the stories of the average Irish woman and housewife. 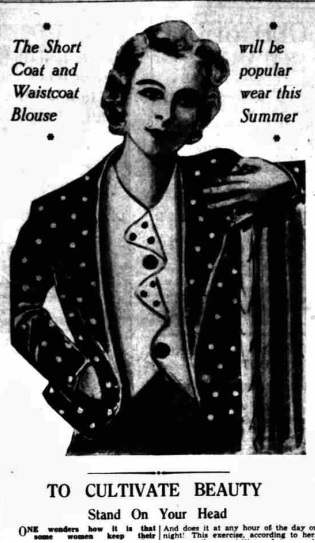