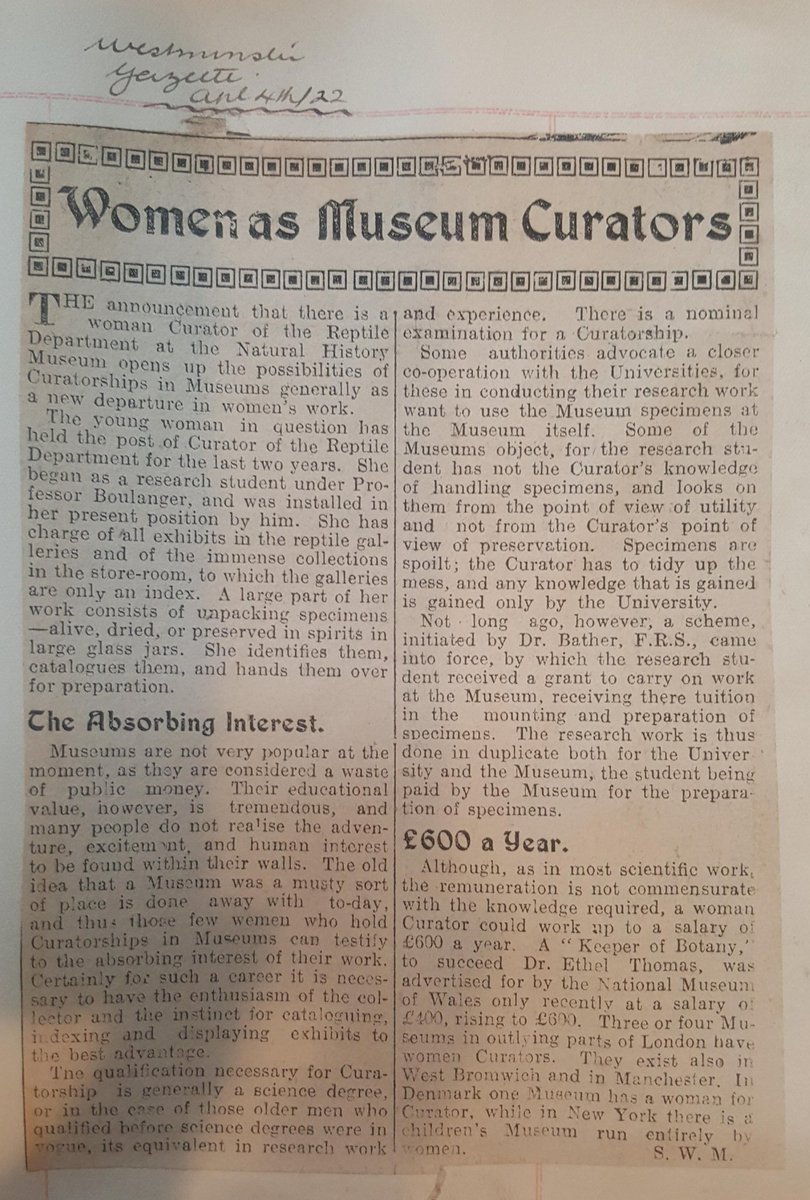 As a ‘Women Curator’ or just simply a ‘Curator’ (I abhor when people put ‘Women’ or ‘Female’ in front of Historian or Curator; why not just the one word? My gender does not determine my ability to curate exhibitions or dessiminate history!) I found this article that was Tweeted by Amgueddfa Library (Library of the National Museum of Wales) interesting as it details information about the first woman, Joan Beauchamp Procter, a Zoologist, to be appointed as a Curator of the Reptile Department at the National History Museum in London. 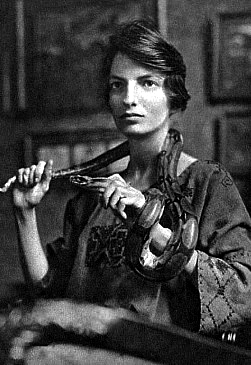 Joan Beauchamp Procter was born in 1897 in London and throughout her short life (she died aged thirty-four in 1931 of cancer) she had an avid interest in all things reptiles to such an extent she had a pet crocodile at the age of sixteen! Her interests in reptiles naturally led her to visit the Natural History Museum in London and she came to the attention of Dr. George Albert Boulenger, then Keeper of Reptiles and Fishes, in 1917 and became his voluntary research assistant before taking over his post in 1920 when Boulenger retired.

Throughout the 1920s Joan was known for her work on reptiles in particular identifying species of reptiles and her work on reptile exhibitions within the museums. Whilst I pretend to know nothing about reptiles it is systematic of women’s history in any given field that Joan is not better known probably because she was a woman.

The article continues to discuss the monetary re-numeration of pay for female curators at £400-£600 per annum is between £22,327.64 and £33,491.46 in today’s money according to the Bank of England inflation calculator. This re-numeration is somewhat inline with mid-high level entry jobs within museums today and was a significant amout of money in the early 1920s. It is heartening that women were at least being paid a good wage for their museum work but it is probable that their men colleagues were paid much, much more for their expertise.

I also found this article thought provoking as towards the end of the article it mentions that female curators ‘exist also in West Bromwich and Manchester’ like they are some rare breed that Joan Beauchamp Proctor had to mount for an exhibition. Sadly, women curators were indeed a ‘rare breed’ up until the late 20th century when more curatorial posts were opening up to women. 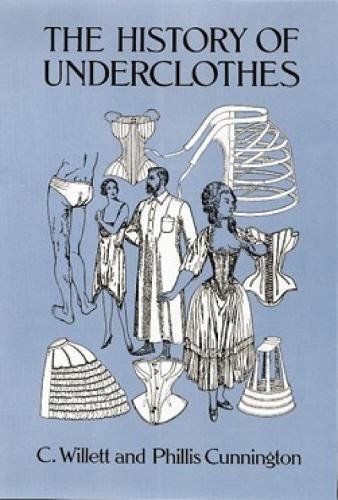 As time moved on several more women were appointed to various curatorial positions in museums in England until we come to 1949 when the Gallery of Costume was established in Pratt Hall in Manchester. Manchester City Council bought the large private collection amassed in the 1930s of ‘everyday’ dress from C. Willett and Phillis Cunnington (one of their books is pictured above) and appointed Anne Buck as the first ‘steward’ or curator. Unfortunatley, I have been unable to find information on early female curators in Ireland and this is perhaps another research strand for a later blog post. However, it is possibly easy to assume that the appointing of women as curators followed the same trajectory in Ireland as it did in the United Kingdom.

I have been unable to find any information on Anne Buck so am unable to ascertain her curatorial style (if indeed she was anything more than an actual steward) and her collection policies for new items for the costume collection. These ‘silences’ within women’s history has been highlighted by Cliona Murphy and Maria Luddy in Women Surviving a compendium of Irish women’s history that highlights forgotten women within Irish history. Luddy and Cliona murphy argue that is up to historians to re-dress these silences by establishing women’s history as part and parcel of the canon of history itself. The same ehtos can be said for the history of women as curator across the Western World. 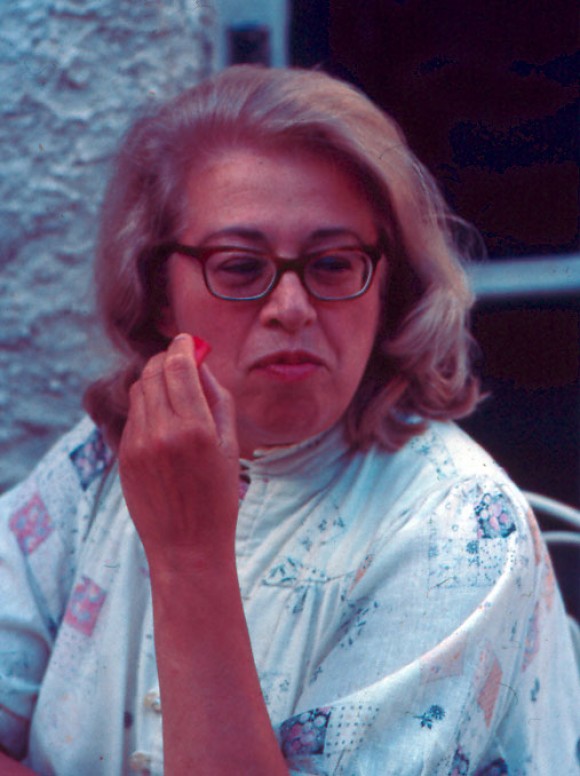 Moving onto the mid to late twentieth century more curatorial roles opened up for women in different specialities including musical instruments, anthropology, art history, dress history etc. One such Curator was Jean Jenkins, a specialist in world music, who was appointed the Horniman Museum in Oxford’s first Keeper of Musical Instruments in 1960. Jean travelled the world recording various musical styles as well as adding to the museum’s world culture collections with musical instruments from across the world. Jean was somewhat a trail blazer and it’s thanks to her and other women like her that becoming a curator is not an ‘oddity’ for a women as it once was in the early to mid-twentieth centuries.

A 2012 report of fifty museums across the UK found that 90% chairs of museums were male with 73% of men being  on the board of directors for museums with women pre-dominantly working in catering, cleaning, front-of-house or junior curatorial positions. This is startling reading for a young woman like myself who is a curator, blogger and independent researcher and has worked in museums and heritage for the last ten years. However, as Laura Diaz Ramos has discussed in her 2012 PhD Thesis enitled, ‘Feminist Curatorial Interventions in Museums and Organizational Change: Transforming the Museum from a Feminist Perspective,’  it is important for women working in museums to push for change to push for change and to push for women to be on board of directors and important decision makers within a museum context. 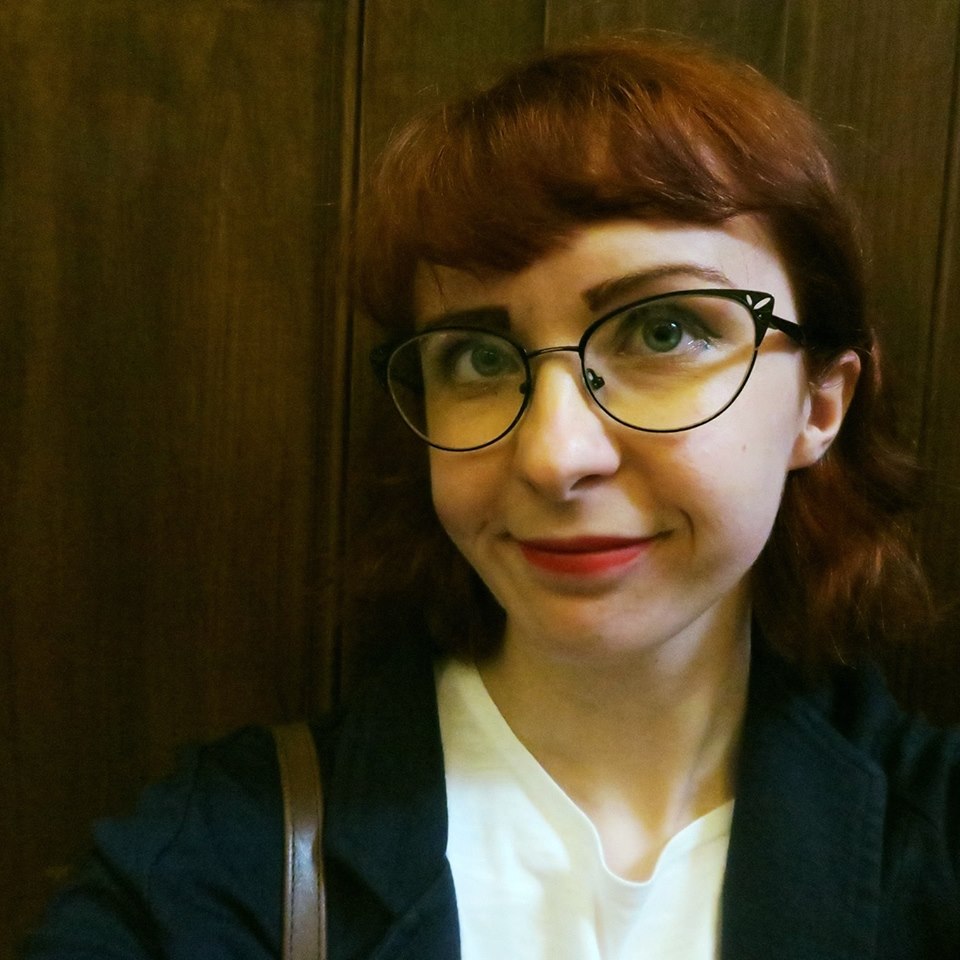 Yes that is a photograph of yours truly (and no I have just not grautiously posted a picture of myself for no particular reason but to highlight my work as a women curator re-dressing the canon of established historical discourse) and I’ve posted it on this blog post as I’m only one female curator that has come after the trail blazers mentioned above. It is my duty as Diaz Ramos has stipulated to push for more female representation in curatorships across institutions worldwide whilst also re-inserting women’s history in the mainstream history displayed within museums. I will maintain to this day that one of my proudest moment’s as a curator was the crafty insertion of female Orange Order items within the re-development of the Orange Order Museum in East Belfast. Whilst the museum might not be to everyone’s taste women’s history covers all apsects of history; even history that is uncomfortable such as the history of the Orange Order in Ireland.

All references linked above including images. Words are author’s own (c) 2013-2019 unless stated.