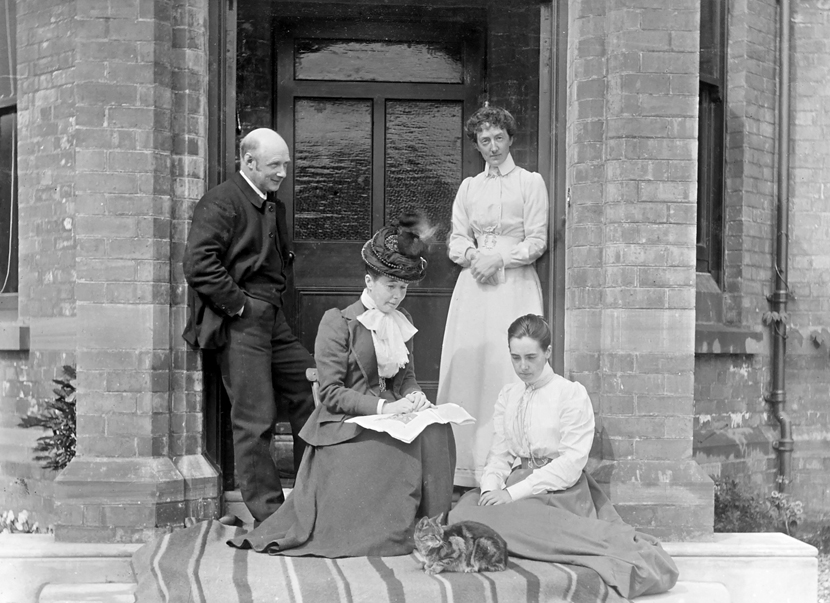 Eva Chichester was a Sunday School teacher born and raised in Newcastle, County Down c.1872 and passed away c.1955. Her life spanned the end of the 19th century and saw the advances for women from the early 20th century to her death in 1955 aged 83. Eva was born into a well-to-do middle-class family and appears from photographs to be her parents only child. Although it is worthwhile noting that little is known about Eva’s life outside of her photographs, albums and travel journals that are now deposited in the Public Records Office of Northern Ireland (PRONI). A systematic problem that is all to common with women’s history that scant details of their lives exist and we are left to pick up the pieces from what records do survive from their lives. 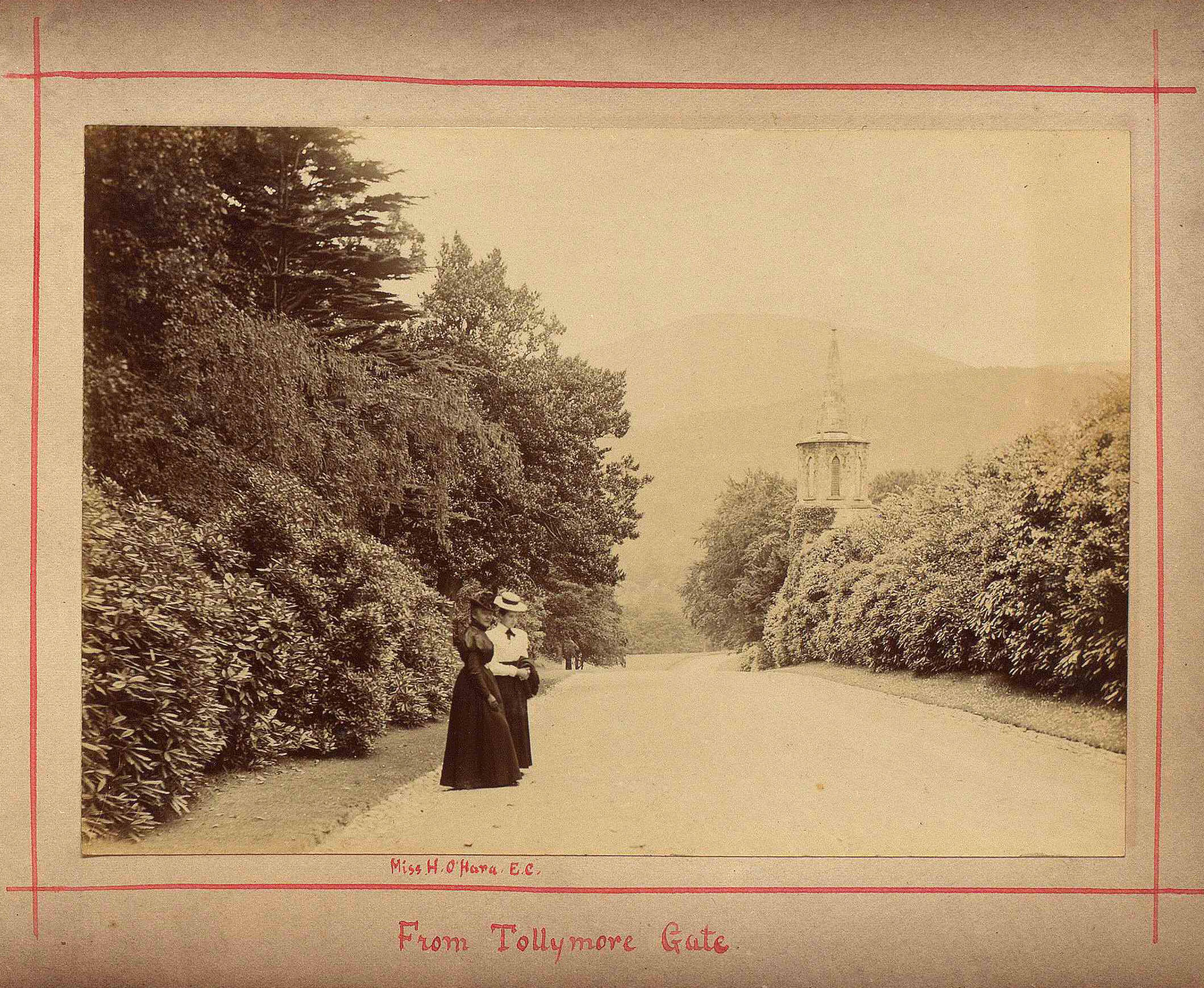 Eva’s photographs and travel journals offer us an every-day view of life in Ireland, Scotland and Continental Europe in a time when most official records come from either a male point of view or an official, governmental point of view. Eva was privileged enough to travel regularly throughout Ireland, Scotland and beyond and one of her photographs depict a large dog pulling a wagon in Belgium. Eva’s journey to Belgium and Germany took place in December 1895 and she comments in her travel journal that whilst taking photographs in Brussels, “a tremendous crowd collected at once round the camera, entirely blocking out the view. I daresay they thought it was a very fast and undignified occupation for ladies!” 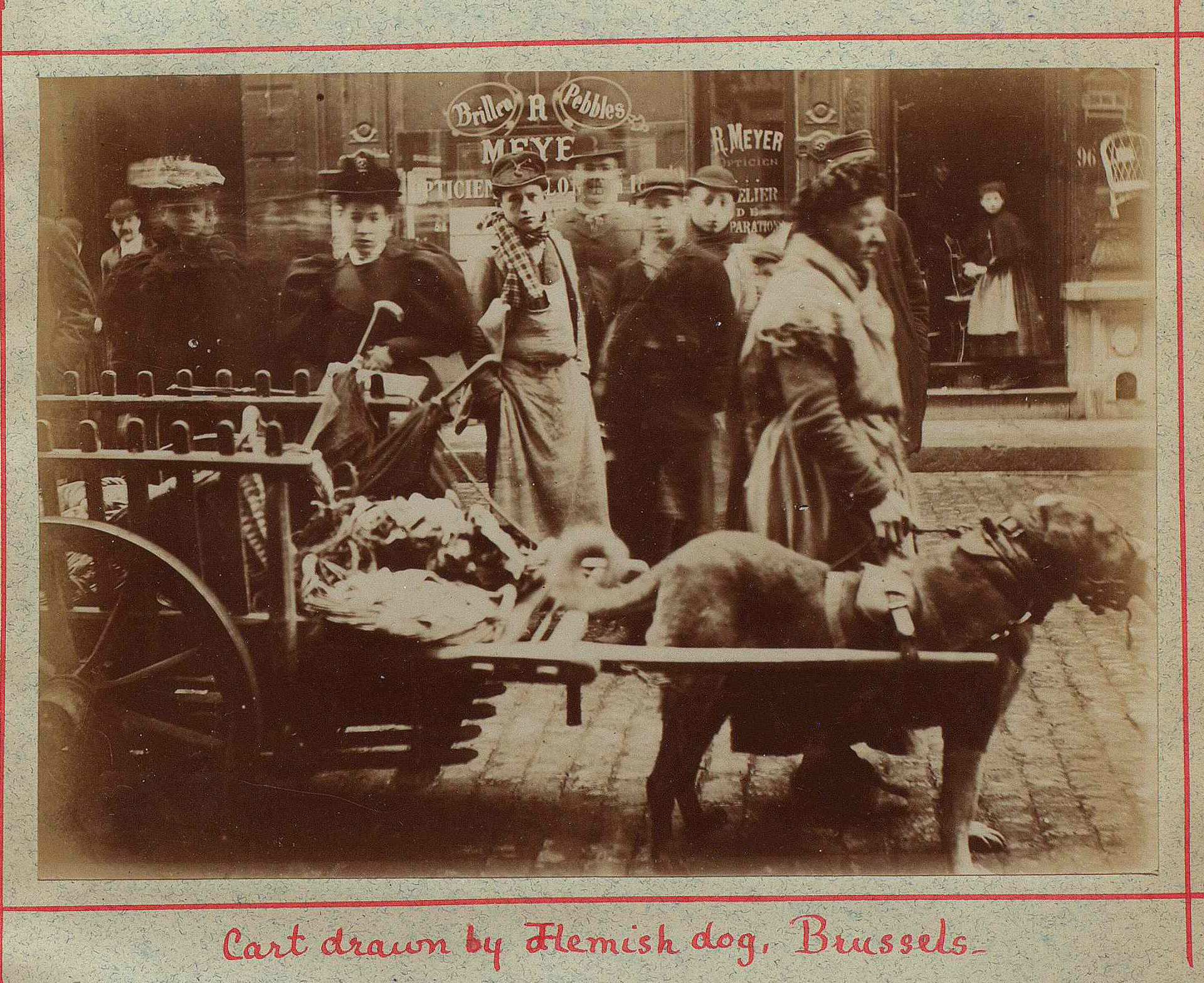 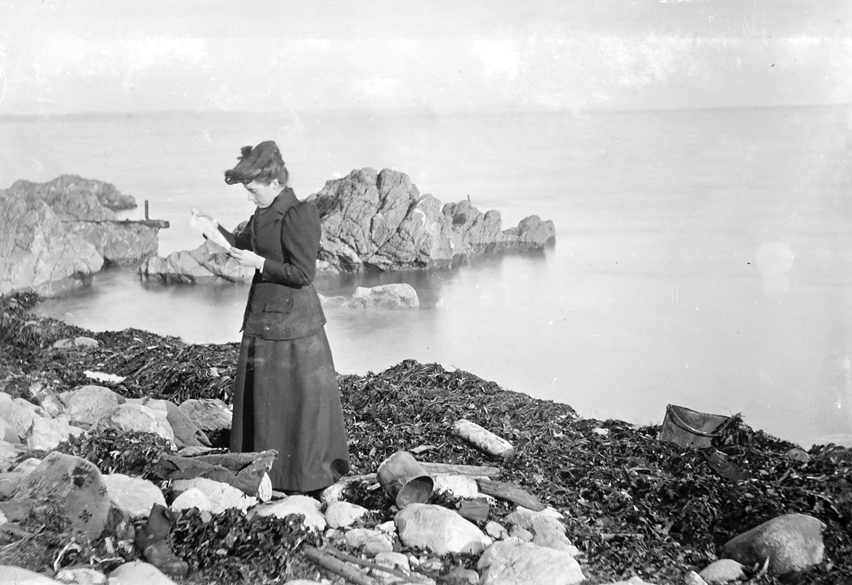 Eva was aware of how unique her position was a female amateur photographer; her parents middle-class wealth afforded her the freedom to partake in her hobby of photography on a regular basis. Her photograph collection incudes photographs of country estates in Ireland, images of the Highlands of Scotland including Loch Katrine and Inverness and depicts a by-gone era of Victorian elegance. Eva’s photographs also document a changing world in Ireland that would eventually lead to the partition of Great Britain in Ireland in 1922 with Eva taking a front row seat at the events of Easter 1916 in Dublin. 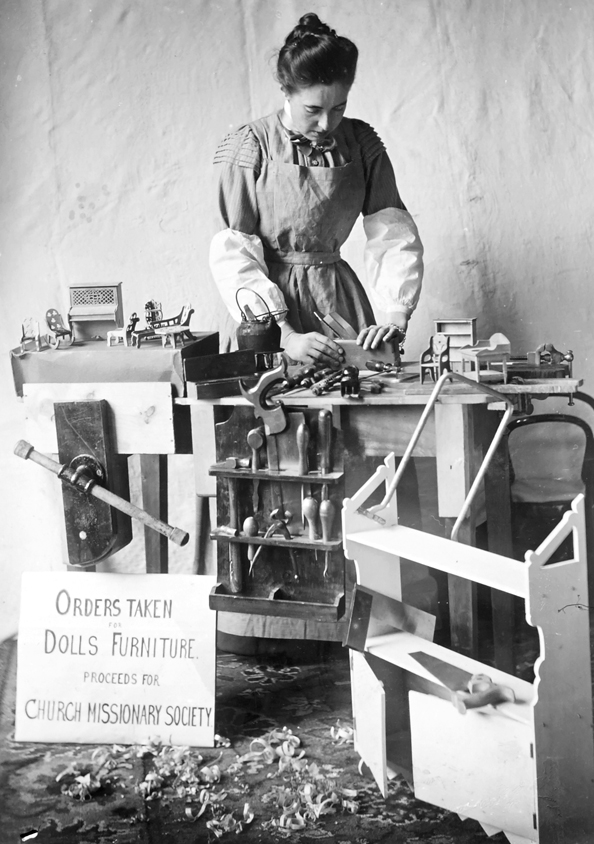 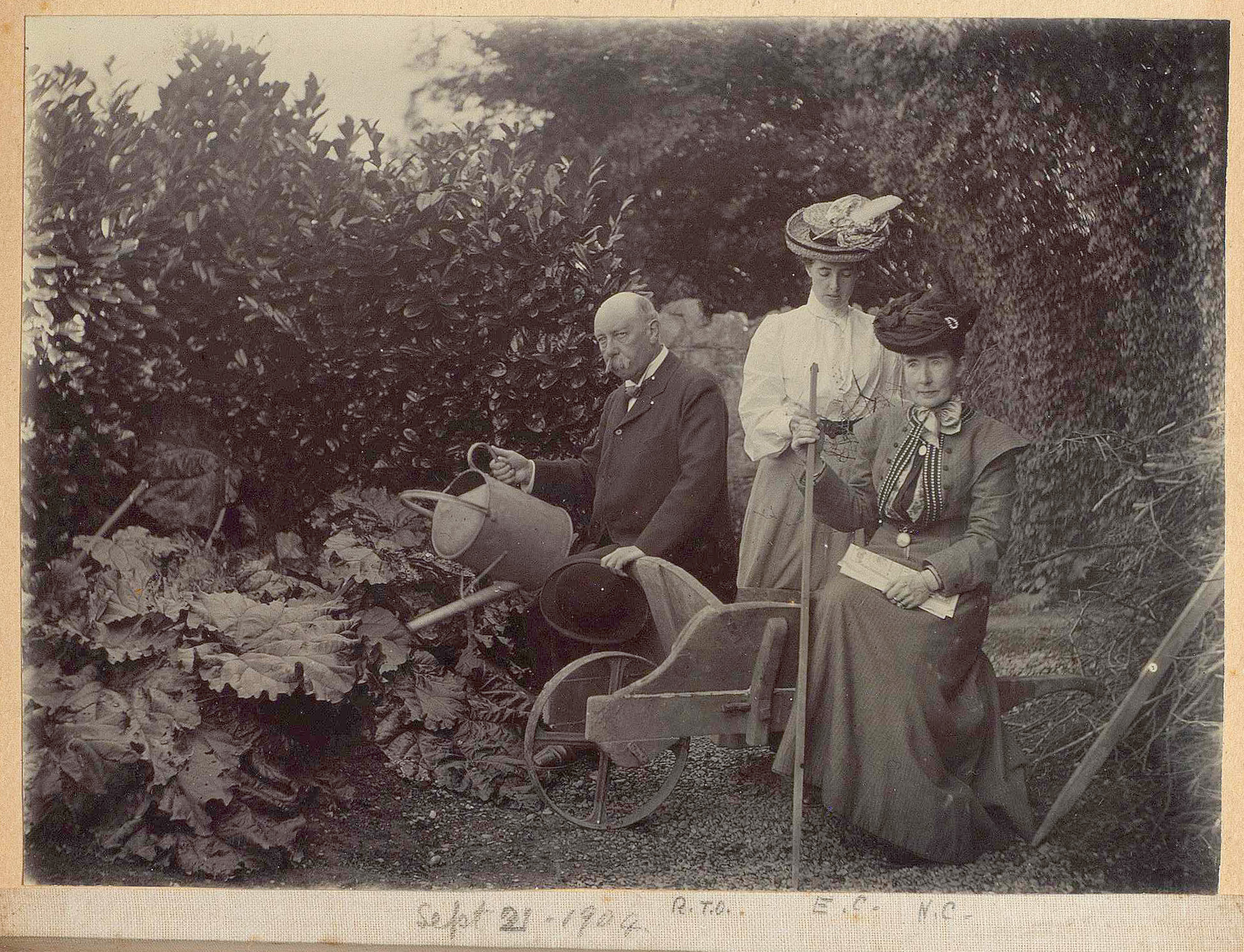 Her travel journal details how on Easter Sunday 1916 she had travelled to Dublin to visit Trinity College Library and was turned back from St. Stephen’s Green by rebels before retreating to the relative safety of her hotel. Eva’s journal is worth quoting verbatim to give a sense of she witnessed events that would be eventually referred to the Easter Rising.  Although her journal entry was written after the events of the Easter Rising her diary gives a sense of how what had started out a s a peaceful Easter Sunday turned into one of the bloodiest periods in modern Irish history. Eva states as follows:

“As we approached the gate opposite to the Shelbourne Hotel, a Sinn Feiner was standing there in full uniform with a pistol in his hand. He was politely showing out the people who were inside the Green (a woman with baby and perambulator, and a few others) after which he shut the gate. We walked on quickly to the next gate; it was already shut. We tried a third; it was a small one and still open having evidently been overlooked, but as we passed out some men came up as if to shut it. We saw that the large entrance-gate was also closed, and a man was just beginning to dig the first trench inside. I believe it was just after that that the rebels were lying in ambush all round the Green, with rifles pointed outwards.”

“Our rooms were only a few minutes walk from the Green, so it did not take us long to return. During the rest of that day we kept hearing from our sitting room strange sounds like the clatter of a pile of wooden planks thrown down. It made us vaguely uneasy, as the noise continued through the night; of course we know now that it was volleys from the rebels’ rifles. The whole thing came like a thunderclap upon everyone, and I fear the number of troops that first day was quite inadequate”. 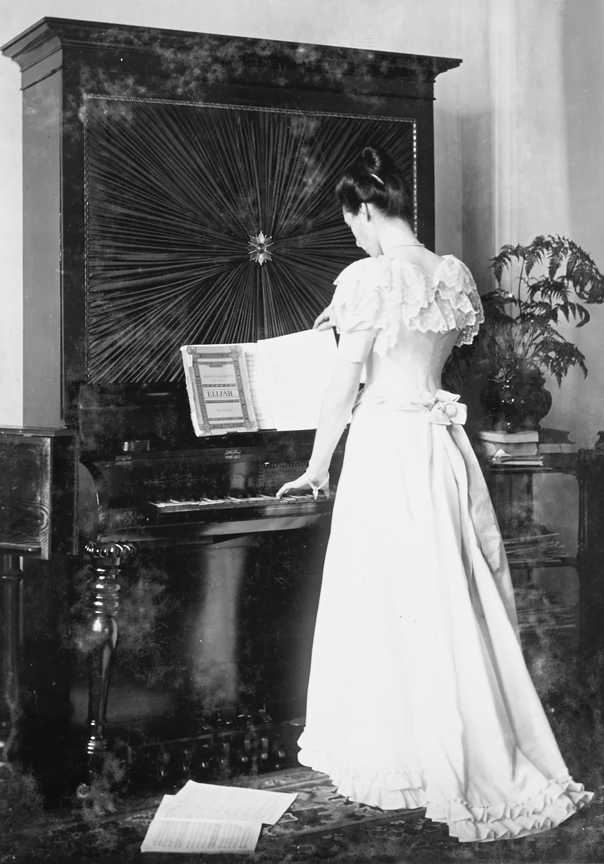 Whilst Eva witnessed events that changed history what drew me to her photographs is the every-day aspect of life she was documenting. There are photographs in her collection (albeit some of them staged such as the gardening picture with her parents below) depict Eva and her friends out on country walks, partaking in picnics, citizens going about their daily lives in Newcastle, visits to country estates and general normal-ness of late 19th century Irish life. Eva’s candid photographic shots of her family (and family cat!) and friends offer us an alternative view of what the Victorian era is purported to be i.e. staid and very formal. In Eva’s photographs we see Eva and her family enjoying themselves partaking in walks and holidays much like we do in the 21st century. The ‘normalcy’ of Eva’s photographs make her collection a precious resource to anyone interested in Irish history, woman’s history and even photographic history. Truly, an artistic and photographic gem!

With kind permission from the Deputy Keeper of Records, Public Records Office of Northern Ireland, 2019.