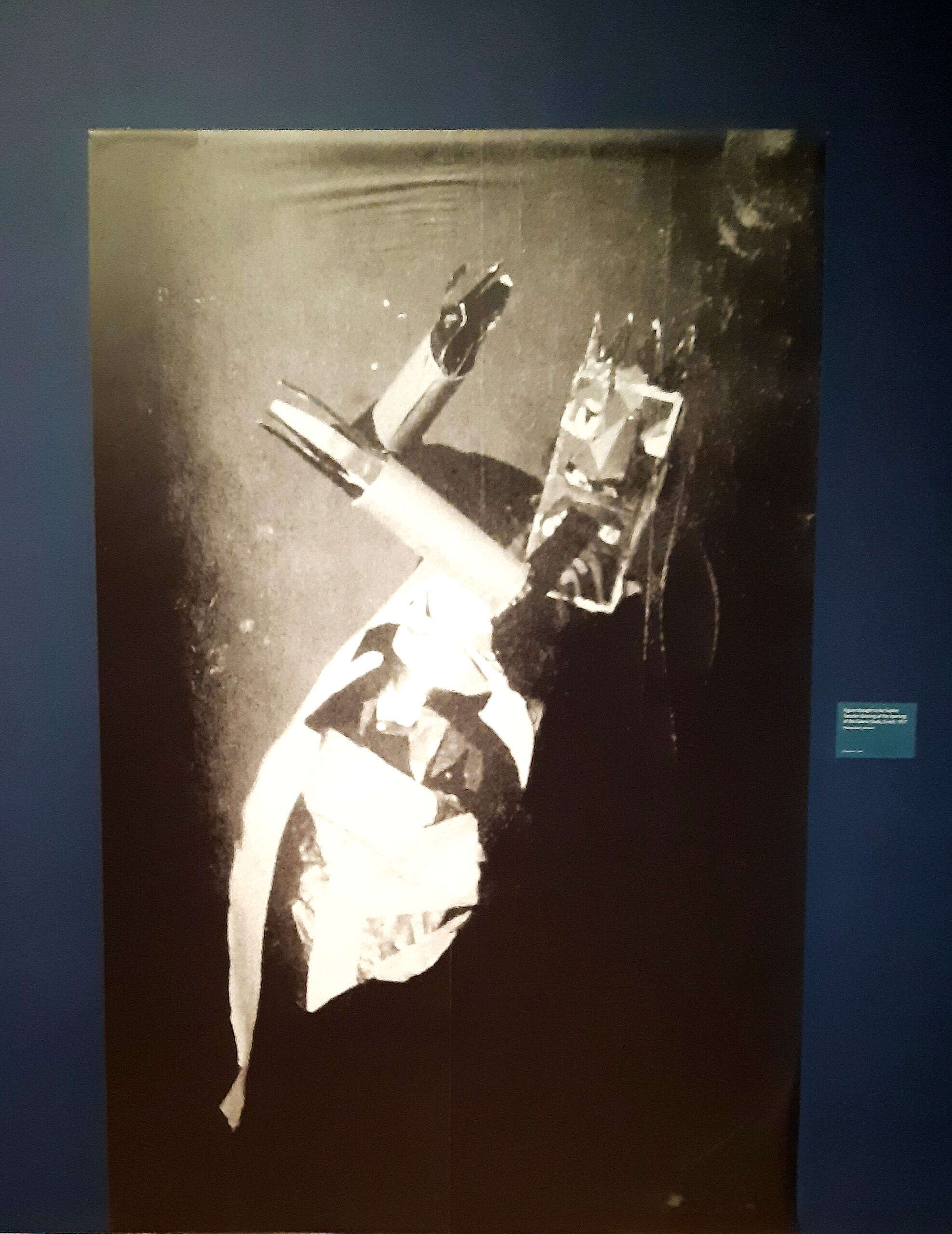 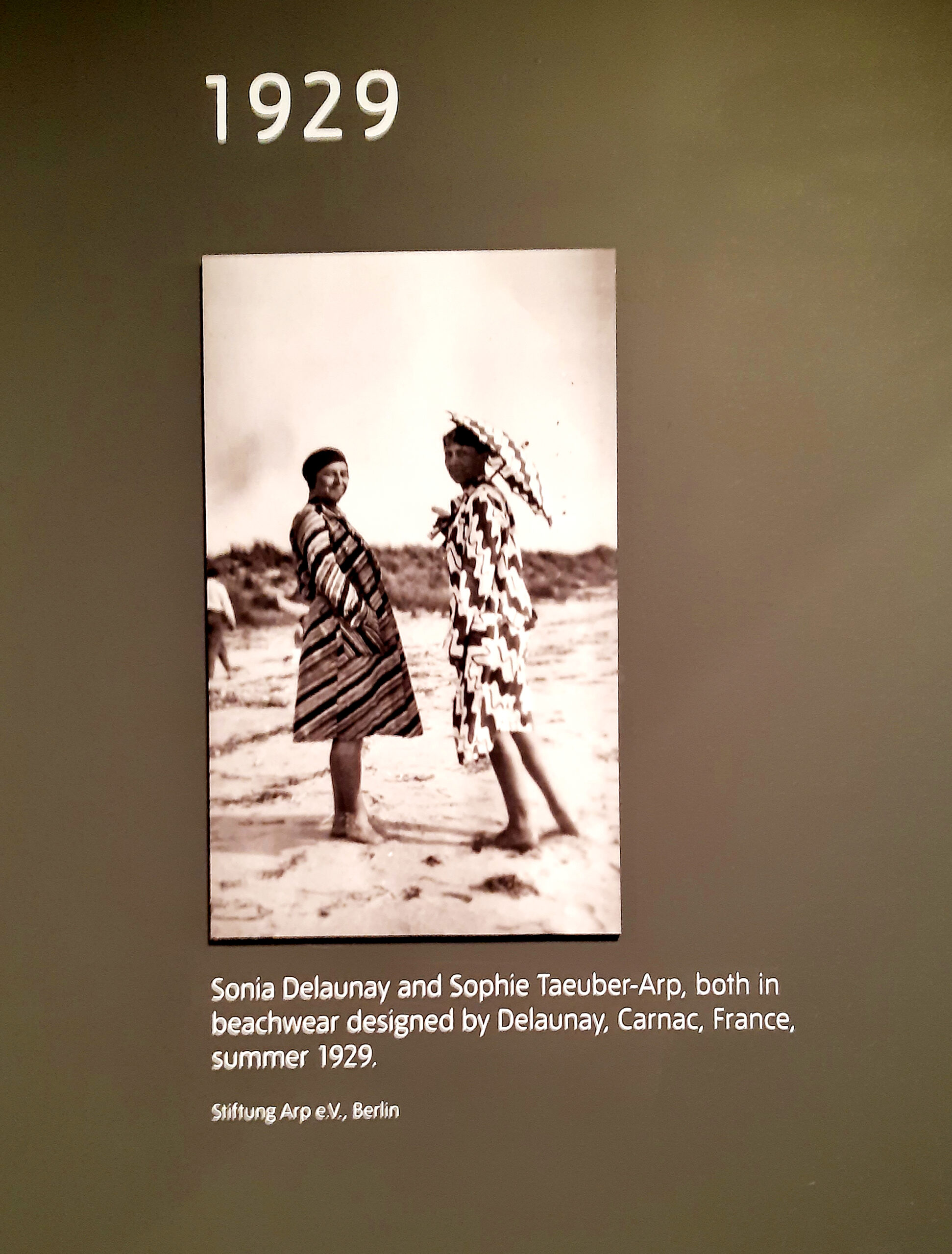 In October 2021, I visited a fantastic (and definitely overdue!) retrospective at the Tate Modern of art work produced by Swiss artist, Sophie Taueber-Arp (19th January 1889-13th January 1943). Taeuber-Arp was a mutli-disciplinary artist who studied textile design in Germany before returning to teach at Applied Arts at the Zurich Trade School in 1914. Whilst working in Zurich Sophie met her future husband Hans/Jean Arp, a Franco-Germanic artist whom she married in 1922. Both Sophie and Hans/Jean became associated with the Dada movement and was one of the few female artists associated with the Dadaist movement.

I had been aware of Taueber-Arp’s work since becoming avidly interested in the works of female artists of the early to mid-twentieth century whilst studying fine art at university. Due to the lack of artworks in Irish/UK museums I have found it hard to view works by female artists of this era including Sophie Taueber-Arp and Hannah Hoch. I could not pass up an opportunity to see an exhibition completely dedicated to one of my favourite artists as I did not know when such an opportunity to see her art work would occur again! 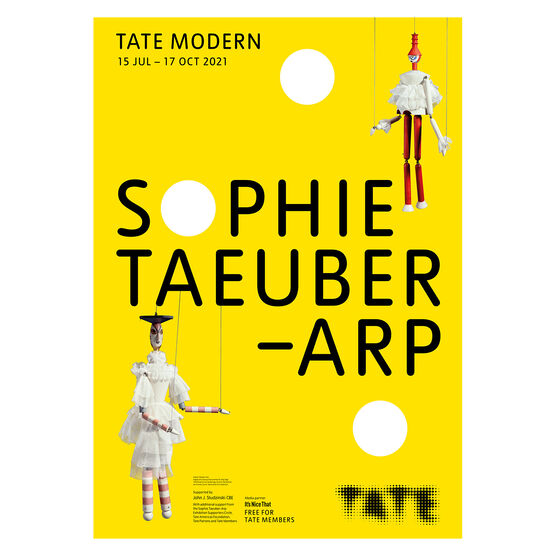 Throughout her time as a teacher in Zurich Taueber-Arp produced experimental works in costume, textiles, embroidery, sculpture, and on paper. This was the beginning of a varied career that crossed different disciplines dependent on her interest at the time of making that particular art work. Taeuber-Arp worked as a teacher, embroiderer, costume designer, dancer, puppet maker, architect, editor etc. to name but a few jobs she had throughout her varied career! 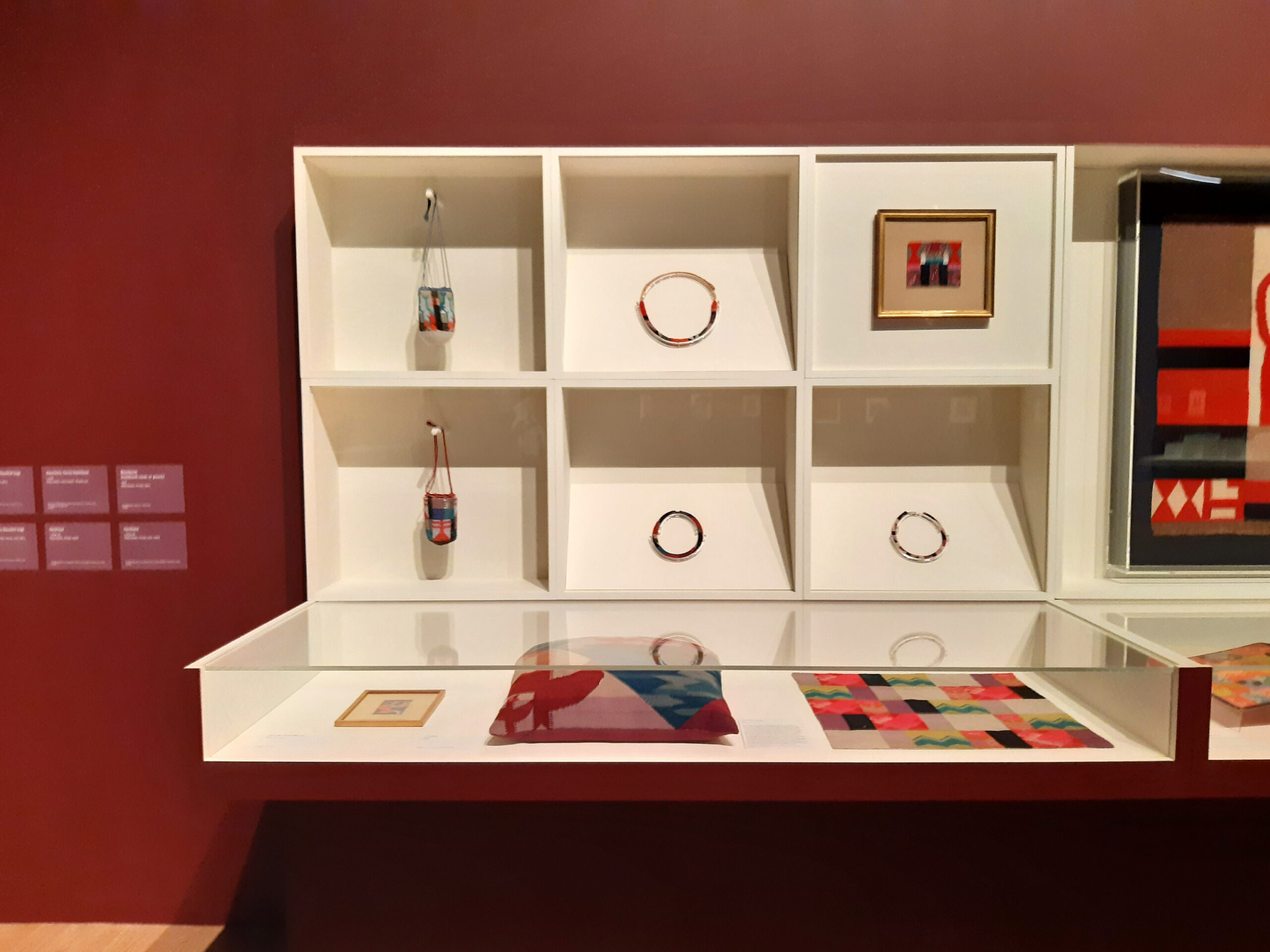 Selection of works by Sophie Taueber-Arp including textiles, jewellery, embroidery, and works on paper. c.1920s.

The exhibition space was large, airy and well laid out on the second floor of the Tate Modern in London. The exhibition was laid out thematically in reference to the different type(s) of art work on display e.g. textiles, puppetry, works on paper etc. Alongside each art work there was contextual information in the form of photographs, exhibition text, sketchbooks, magazines etc. The accompanying material gave the reader and viewer a well-rounded view of Taeuber-Arp’s approach to developing and producing her ideas as an artist whilst also offering an overview of her life as she lived in Switzerland and France and travelled across Europe. 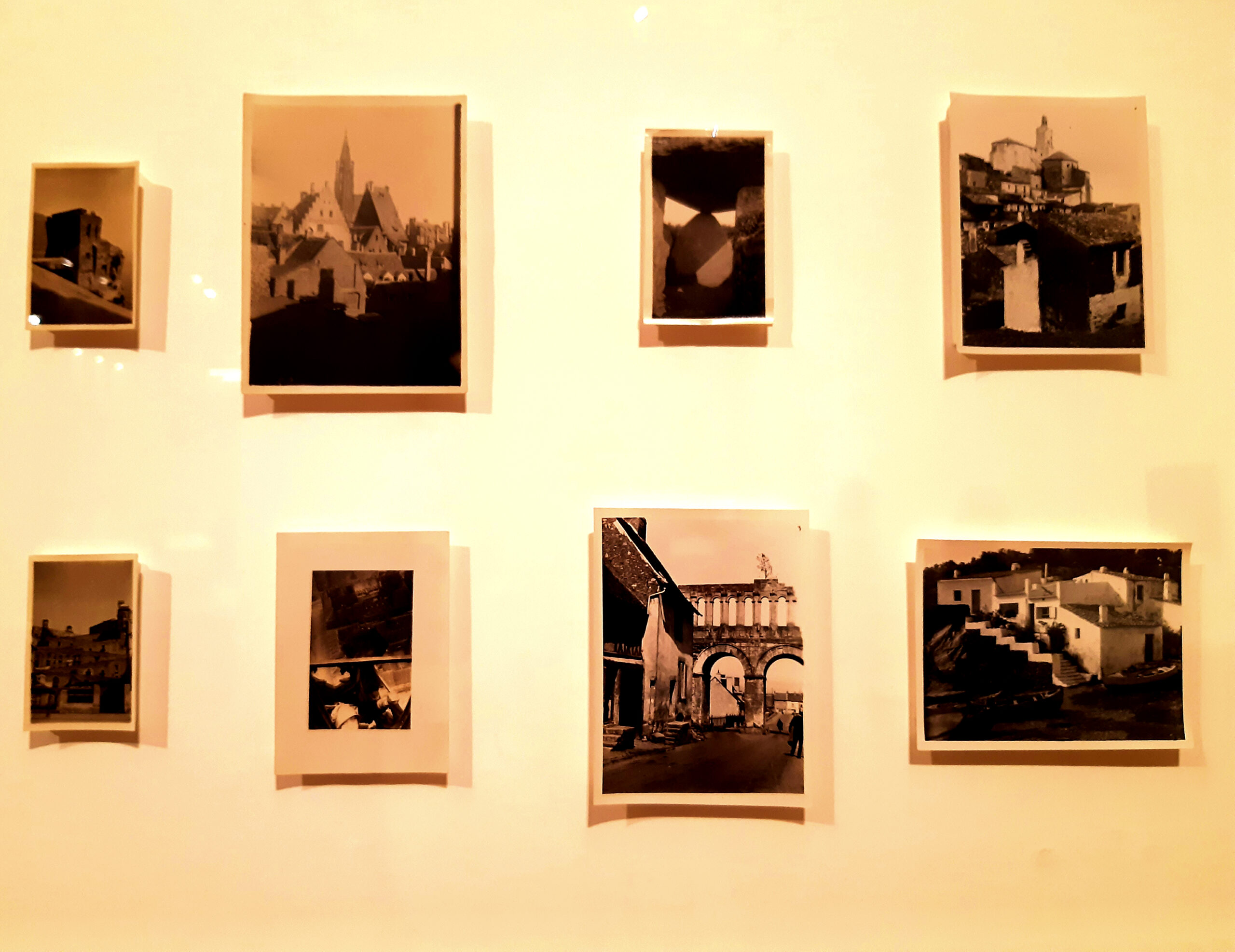 Photographs of Sophie Taueber-Arp’s visits to Italy, Spain, and France. 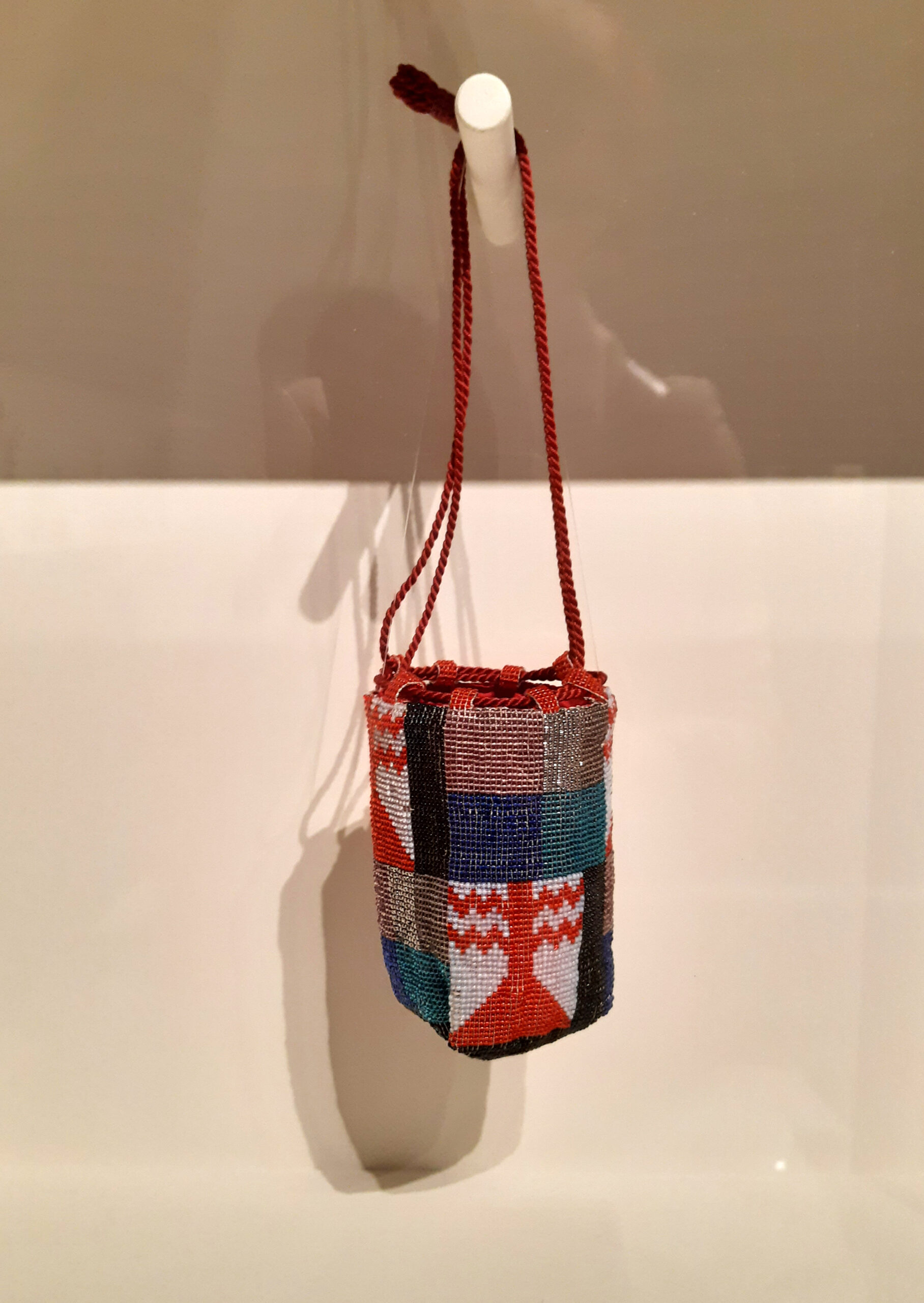 Additionally, the art works where either exhibited in clear 3D glass boxes or in flat glass-fronted pieces attached to the wall or in exhibition panels. The usage of clear 3D glass boxes for Taeuber-Arp’s ‘Dada Heads’ series where on a plinth at eye-level that the viewer could walk around to get a three dimensional view of all aspects of the heads. Textile works and works on paper were flat mounted in glass exhibition cases that displayed the pieces beautifully whilst also highlighting the beauty of each object. 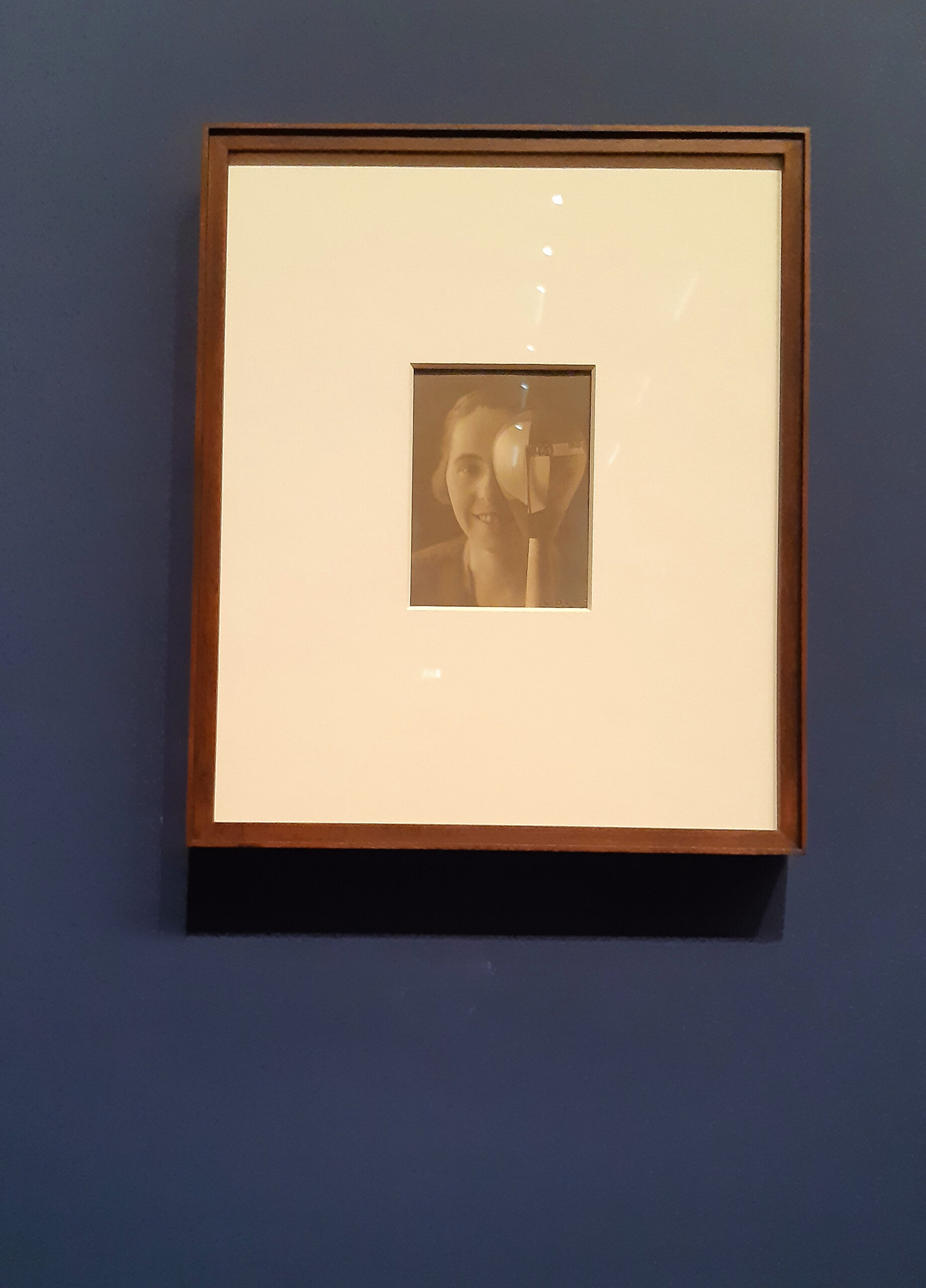 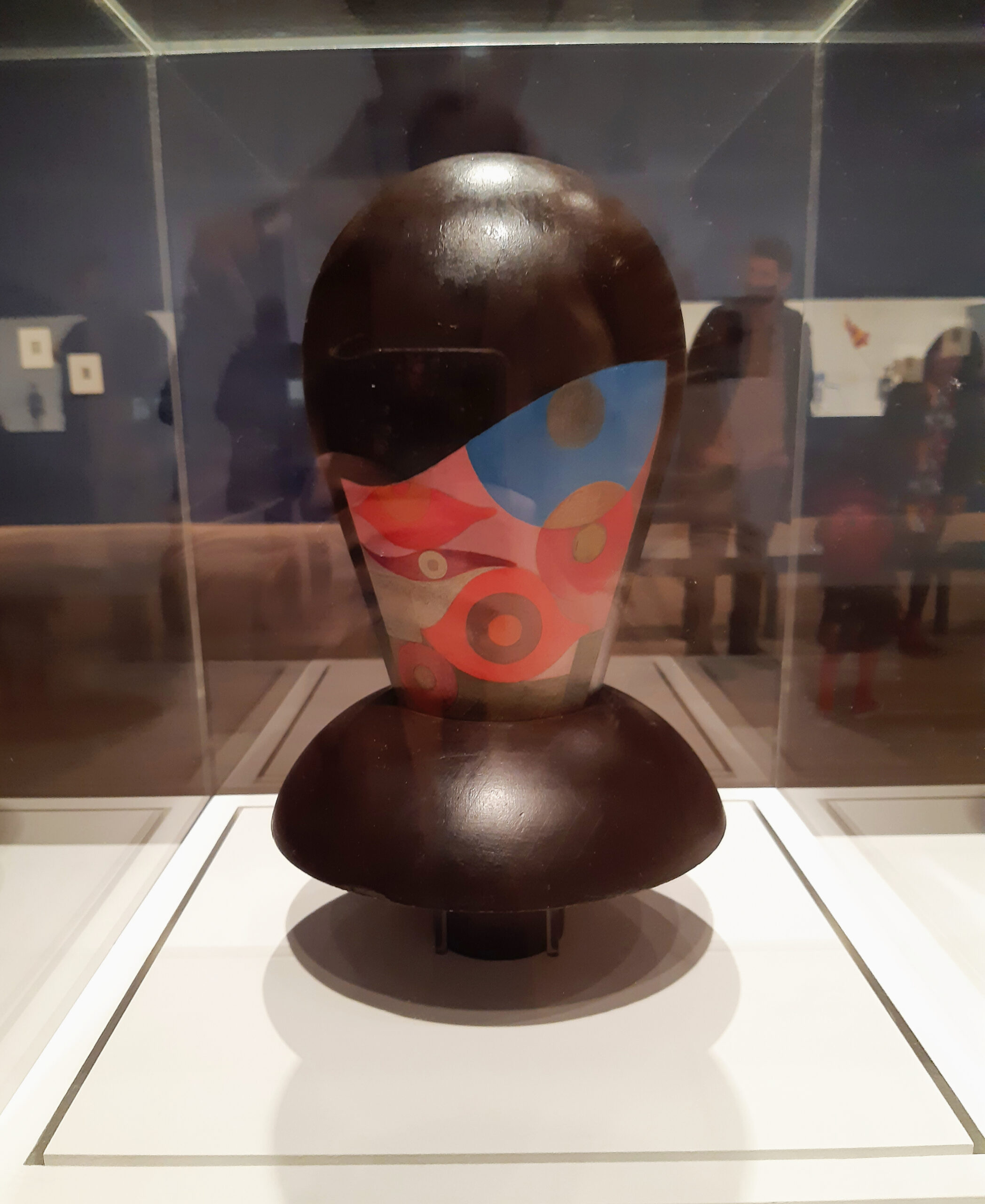 My favourite display in the earlier part of the exhibition documenting Taueber-Arp’s Dadaist work was the large display case featuring puppets produced by the artist for a 1918 edition of King Stag (1762). The characters, props, and set where made with cylindrical pieces of metal, wood, and wire and attached at each join with metal rings. Cylindrical shapes and imagery where a constant feature of Taueber-Arp’s work throughout her career which is clearly illustrated in the puppets in the pictures below. Additionally, the puppets where an outlet for her mutli-disciplinary practice as they also feature painted faces, textile elements, wood and metal work, and move as if they are performing a Dadist dance. 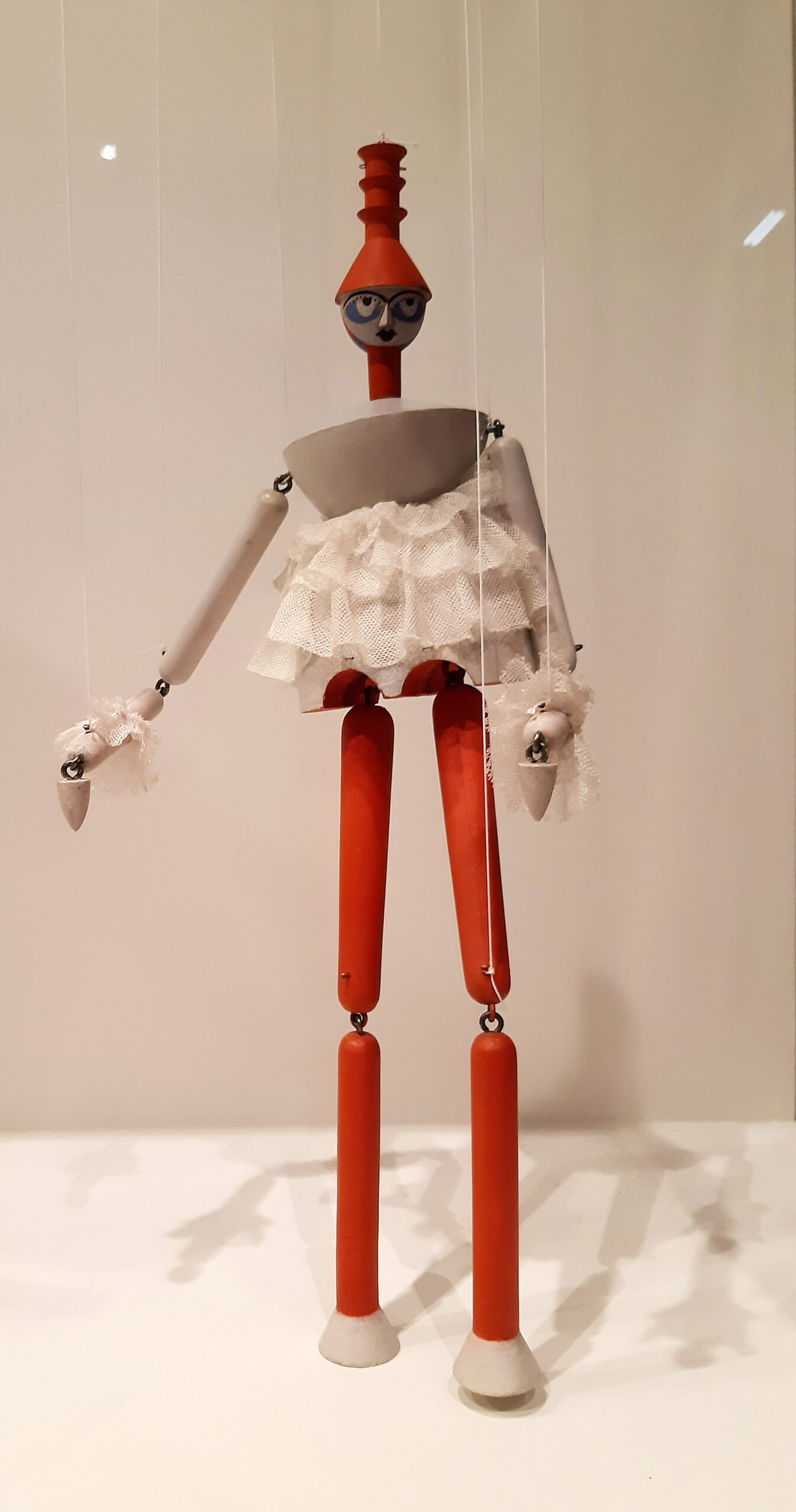 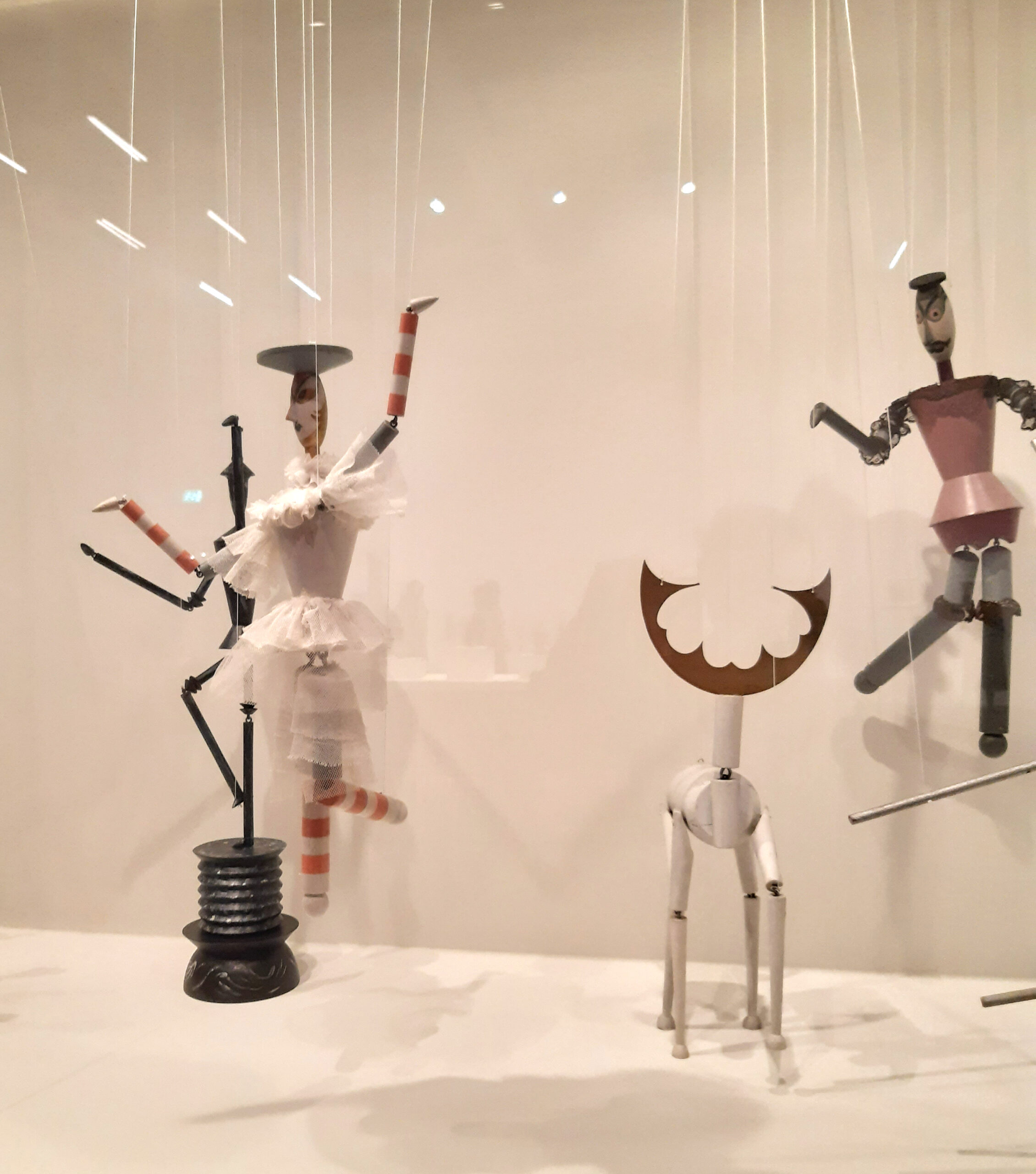 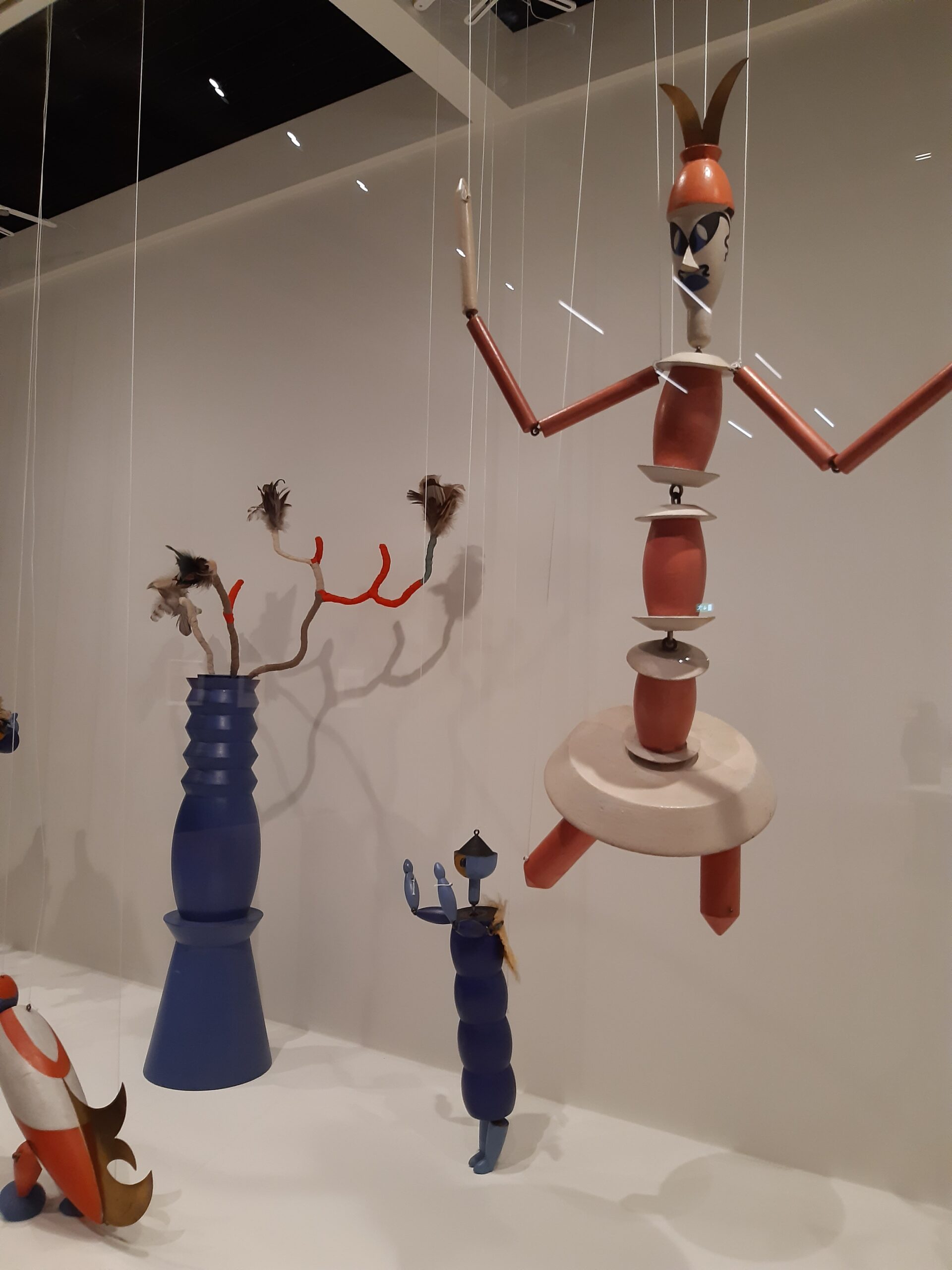 The first half of the exhibition dealt with Taeuber-Arp’s development as a multi-disciplinary artist during and after the First World War before moving onto her work in France where she lived from the late 1920s onwards. The latter half of the exhibition dealt with her experiences of living in occupied France from 1940 onwards before finally moving back to Switzerland before her death in 1943. The varied art works in the exhibition will be dealt with in a further blog post along with a look at Taeuber-Arp’s later career. I don’t like to overdo it with too much information in one blog post – plus it keeps you coming back for more!

Information for this blog post taken from following links: