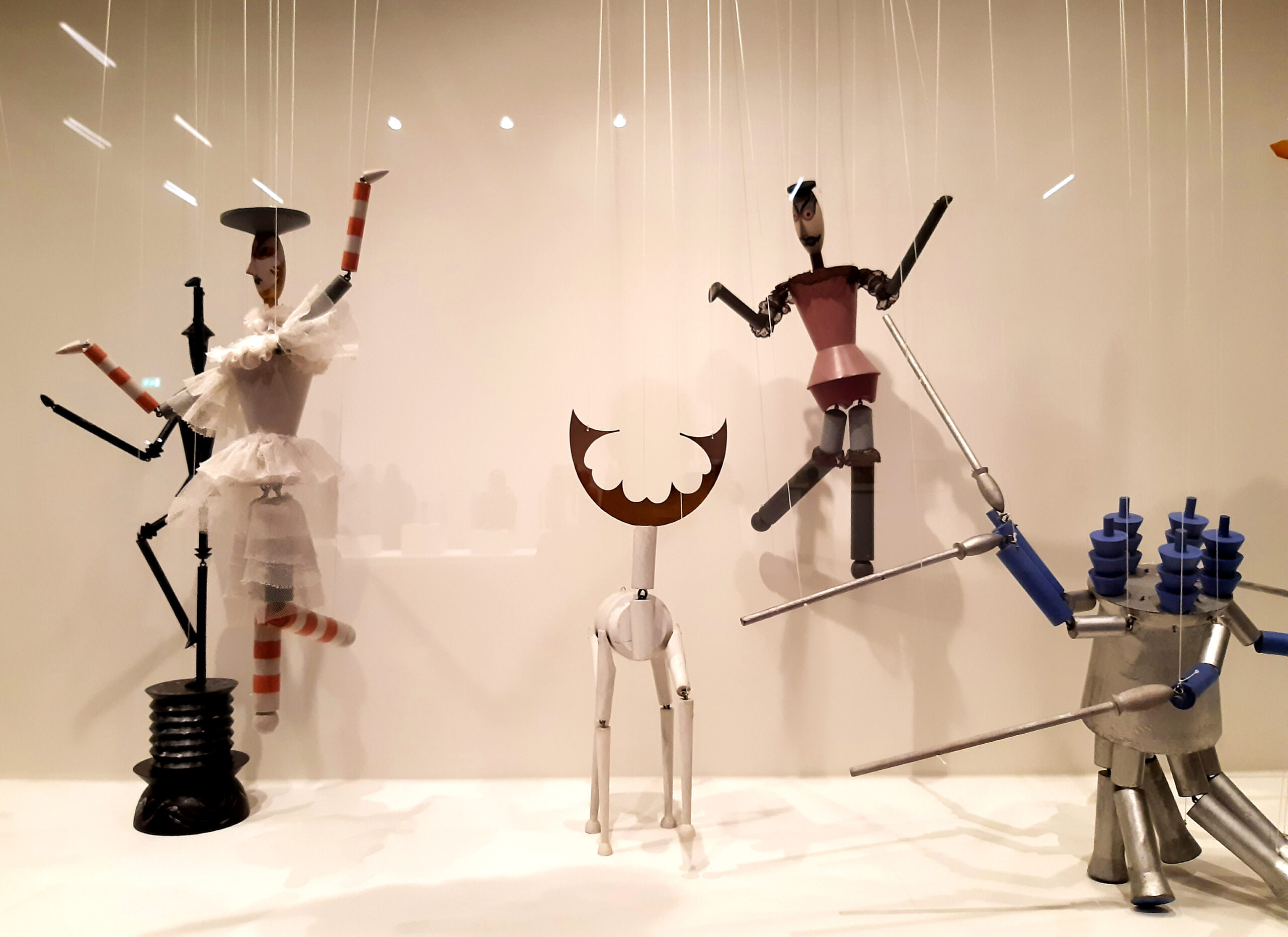 As mentioned in my last post I had the great opportunity to visit the Sophie Taeuber-Arp retrospective at the Tate Modern, London, in October 2021. Sophie Taeuber-Arp is like many women artists; an over-looked Modernist artist whose prolific output and truly multi-disciplinary. Taeuber-Arp worked in mediums as diverse as metal work and needlepoint to drawing and dance across a career that traversed the early part of the twentieth century. 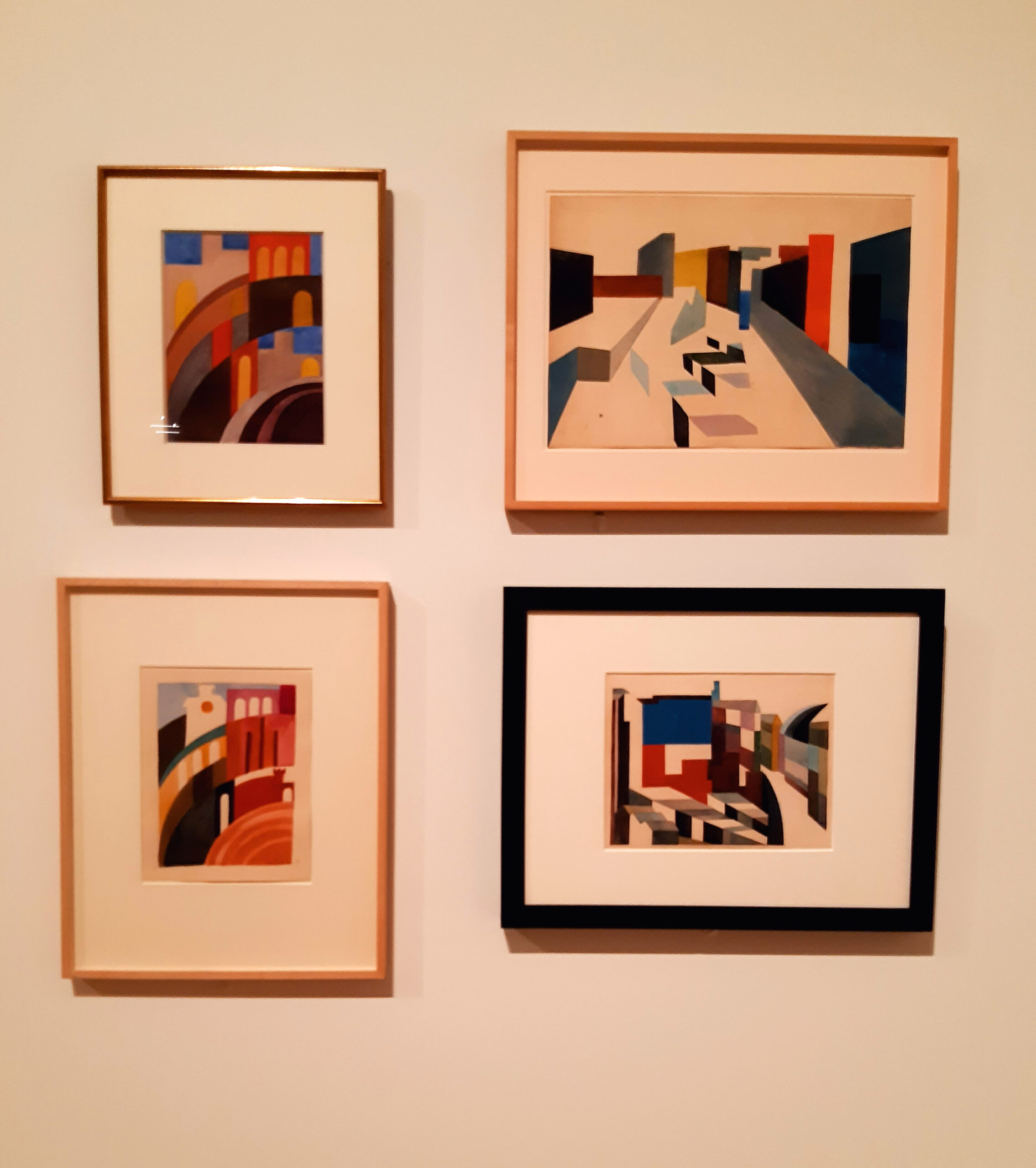 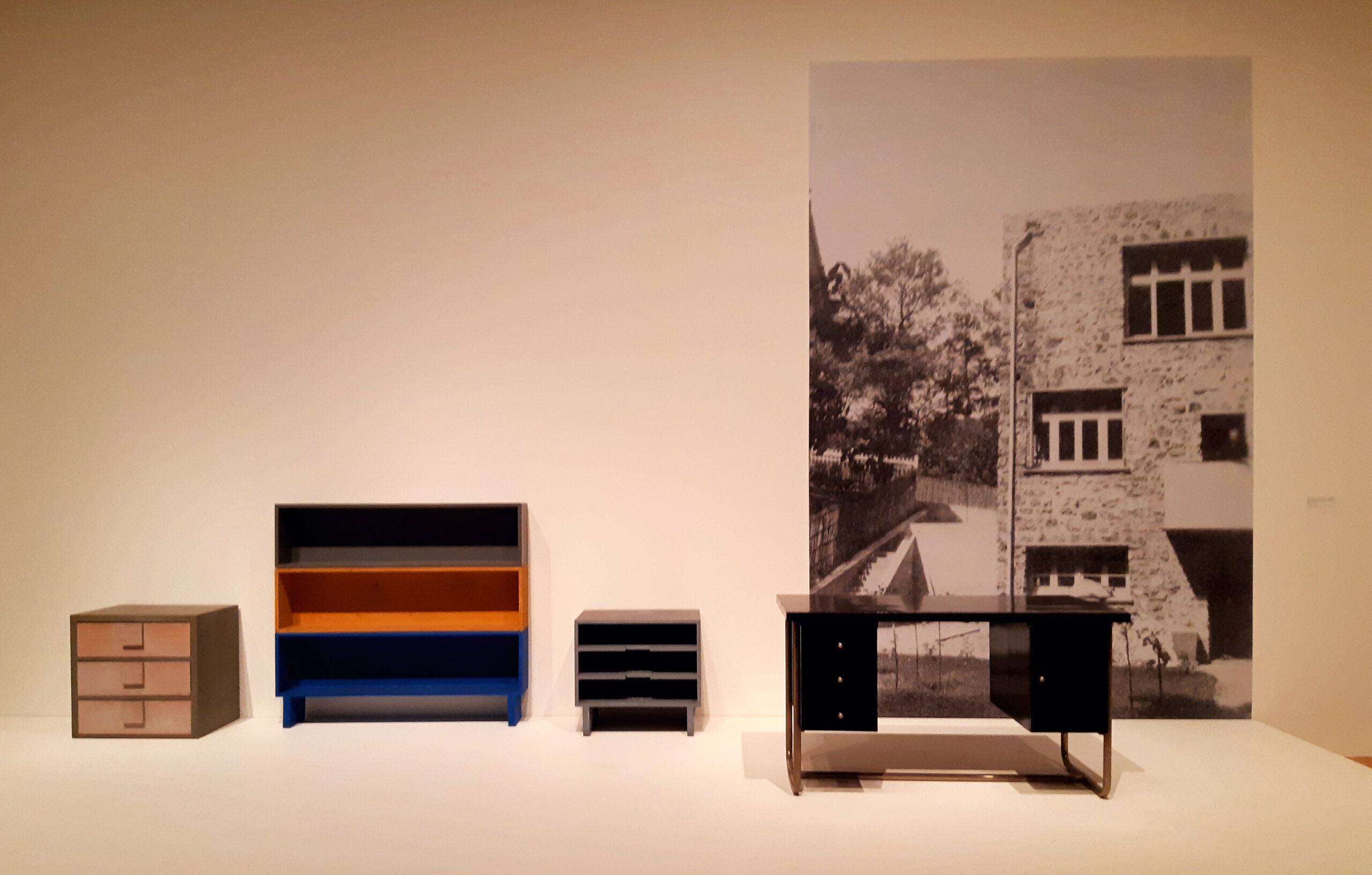 Examples of Taeuber-Arp’s output from the 1920s. Top Image: Paintings on paper,

Bottom Image: Furniture designed at what is now the Fondation Arp in Paris

(black and white picture in background).

Taeuber-Arp moved to France with her husband Hans/Jean Arp in the 1920s,  after working in Zurich, where she continued to establish herself as one of the foremost Dadaist and Modernist artists of her generation. Taeuber-Arp did not train in a traditional school of art but had decided to train in crafts in order to earn a living as a crafts practitioner and teacher. Whilst studying Taeuber-Arp also studied modern dance under Rudolf van Luben and designed and made furniture and posters. It is not surprising by the time she was working in Paris in the 1920s Taeuber-Arp was dedicated to many mediums. 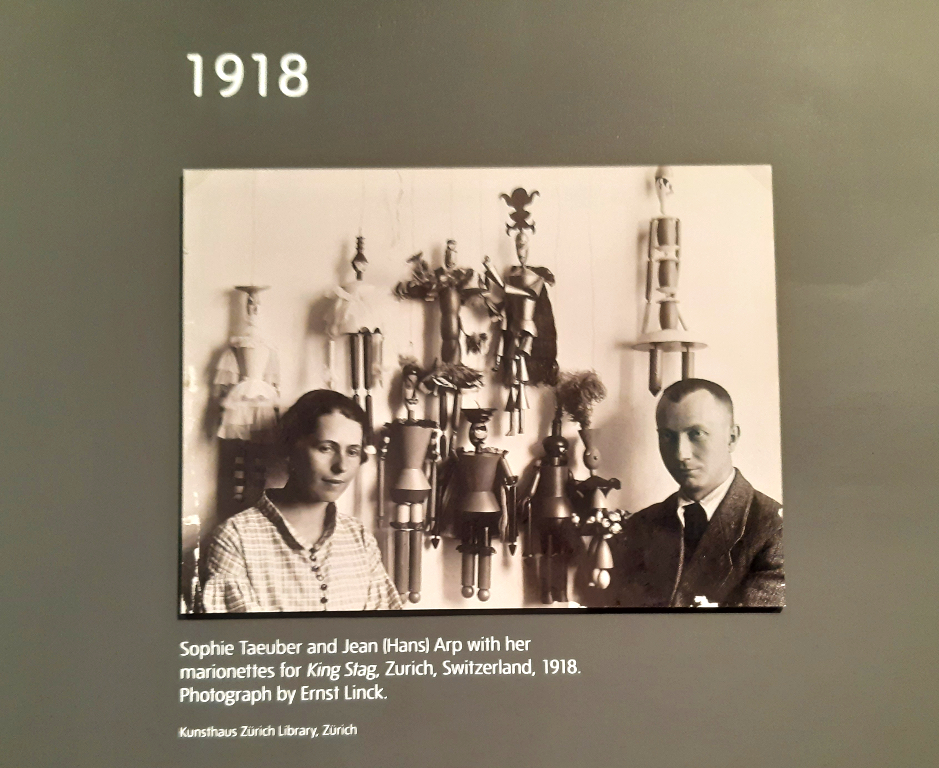 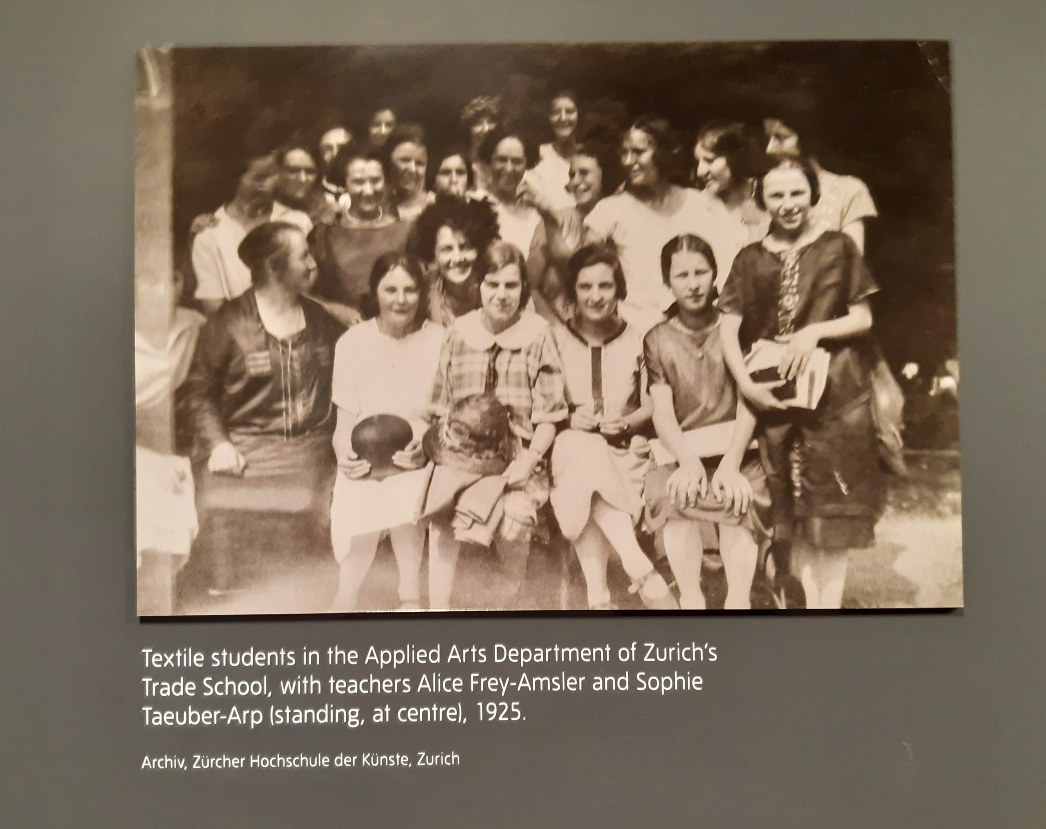 Top Image: Sophie Taeuber-Arp and Hans/Jean Taueber-Arp in 1918 with puppets from King Stag.

The plethora and scope of the works on paper, textiles, puppetry, and furniture which Taeuber-Arp produced was reflected throughout the exhibition at the Tate Modern. The inclusion of these artworks was juxtaposed against a chronology of her work as an artist in the 1910s to 1940s as well as reflections of how world events of this period affected Taeuber-Arp’s work. The number of different artefacts gave the viewer an idea of how prolific Taeuber-Arp was in her lifetime as one of the pre-eminent artists of her generation. 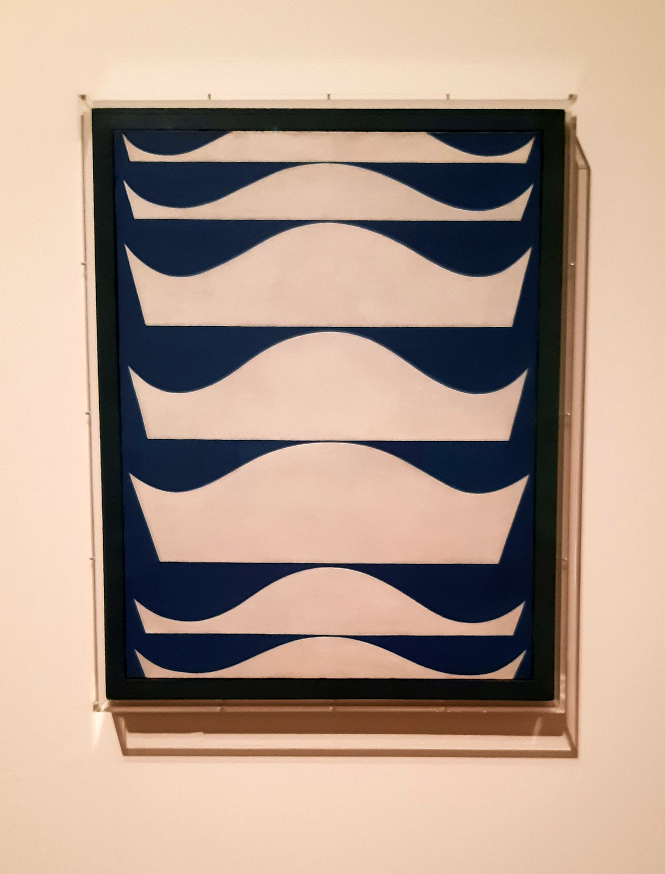 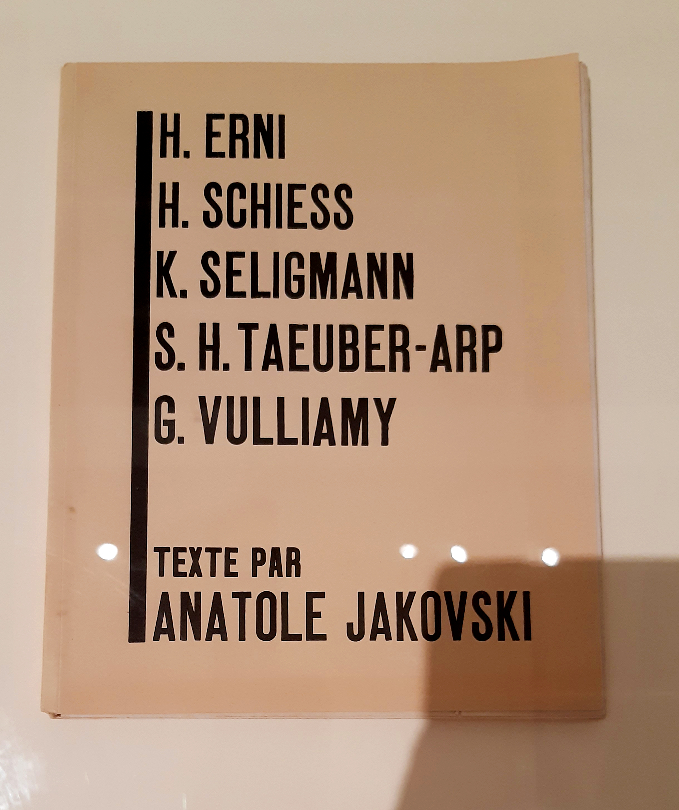 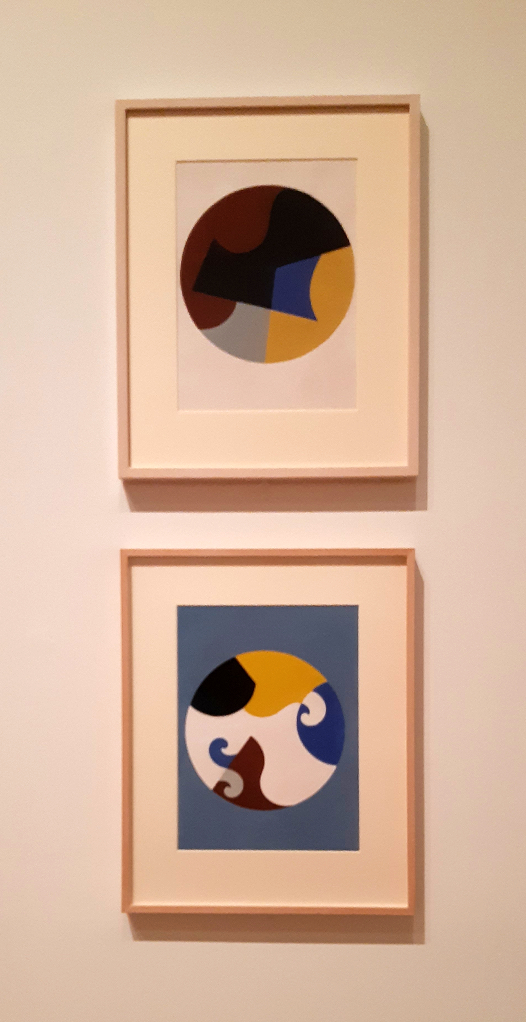 Images: Various works on paper including collage, paintings, drawings, and an exhibition catalogue.

Taeuber-Arp profile as an artist peaked in the 1920s and 1930s with varied commissions from designing silver themed ‘Five O’Clock’ tea room a the ‘Aubette’ in Strasbourg and modernist stained glass windows for the same building. During this time Taueber-Arp also continued her practice as a multi-disciplinary artist producing works in textile forms including tapestries, bags, and cushion covers and works on paper including drawings and paintings.

Though the 1930s were prolific for both Sophie and her husband, Hans/Jean Arp, like many artists they felt the rise of fascism in the late 1930s and sought to distance themselves from fascism by concentrating on their art. However, after the outbreak of the Second World War in 1939 the war finally caught up with both Sophie and Hans/Jean and they escaped to the South of France. 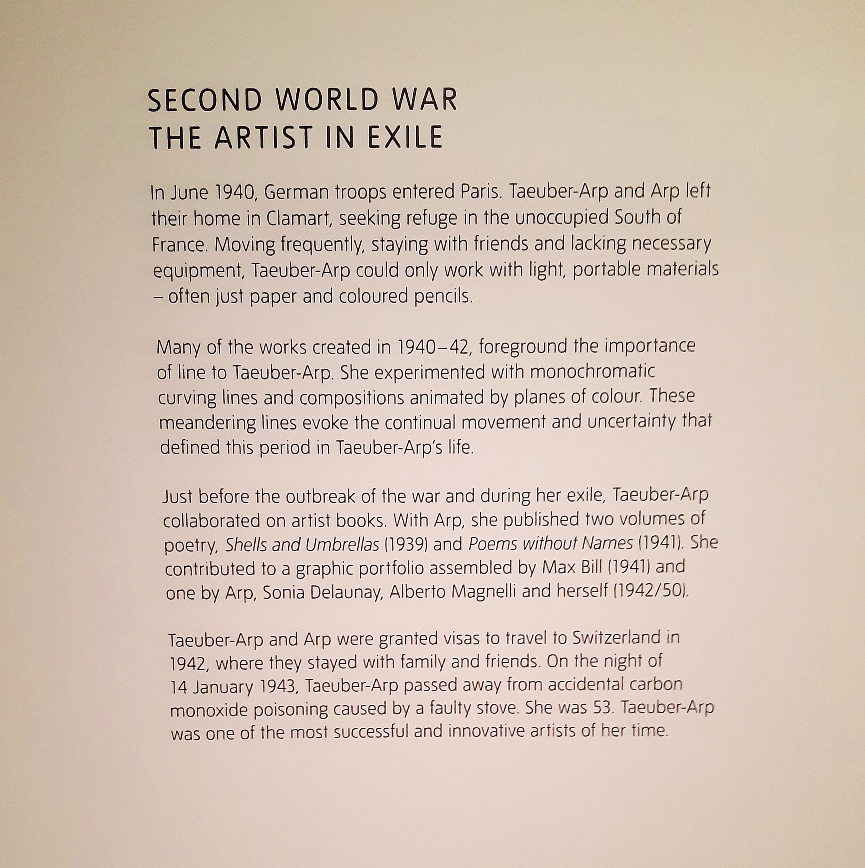 During 1940 to 1942 Sophie and Hans/Jean moved several times to live with friends across the South of France and were only able to take portable equipment with them for practicing their art work. Namely, pens, paper, and other light weight material that was easily transportable. In what was to be the last few years of Taueber-Arp’s working life she returned to drawings that reflected this precarious existence with the lines and forms in her art work representing her continual move from one location to another. The lines and forms in her later drawings are often akin to marks on a map marking out a military campaign; very apt for the time of the drawings productions. 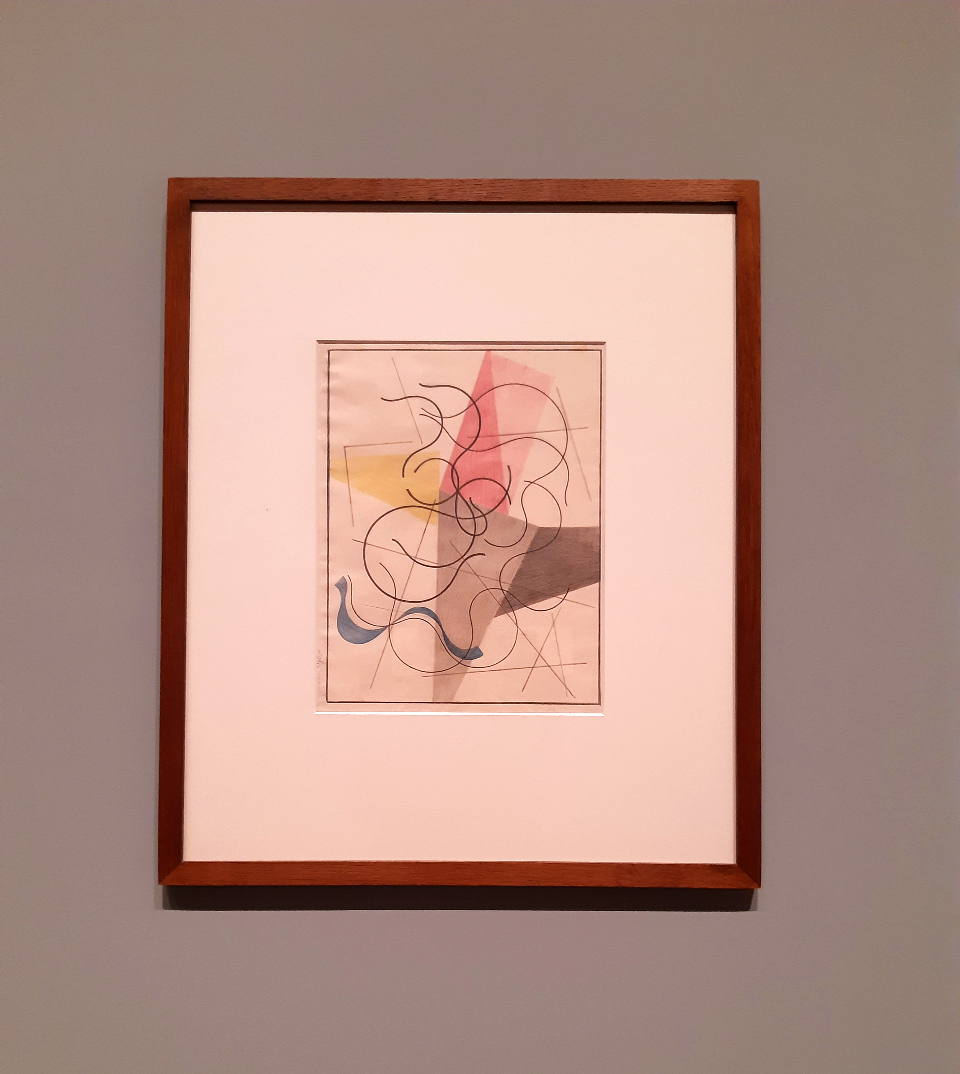 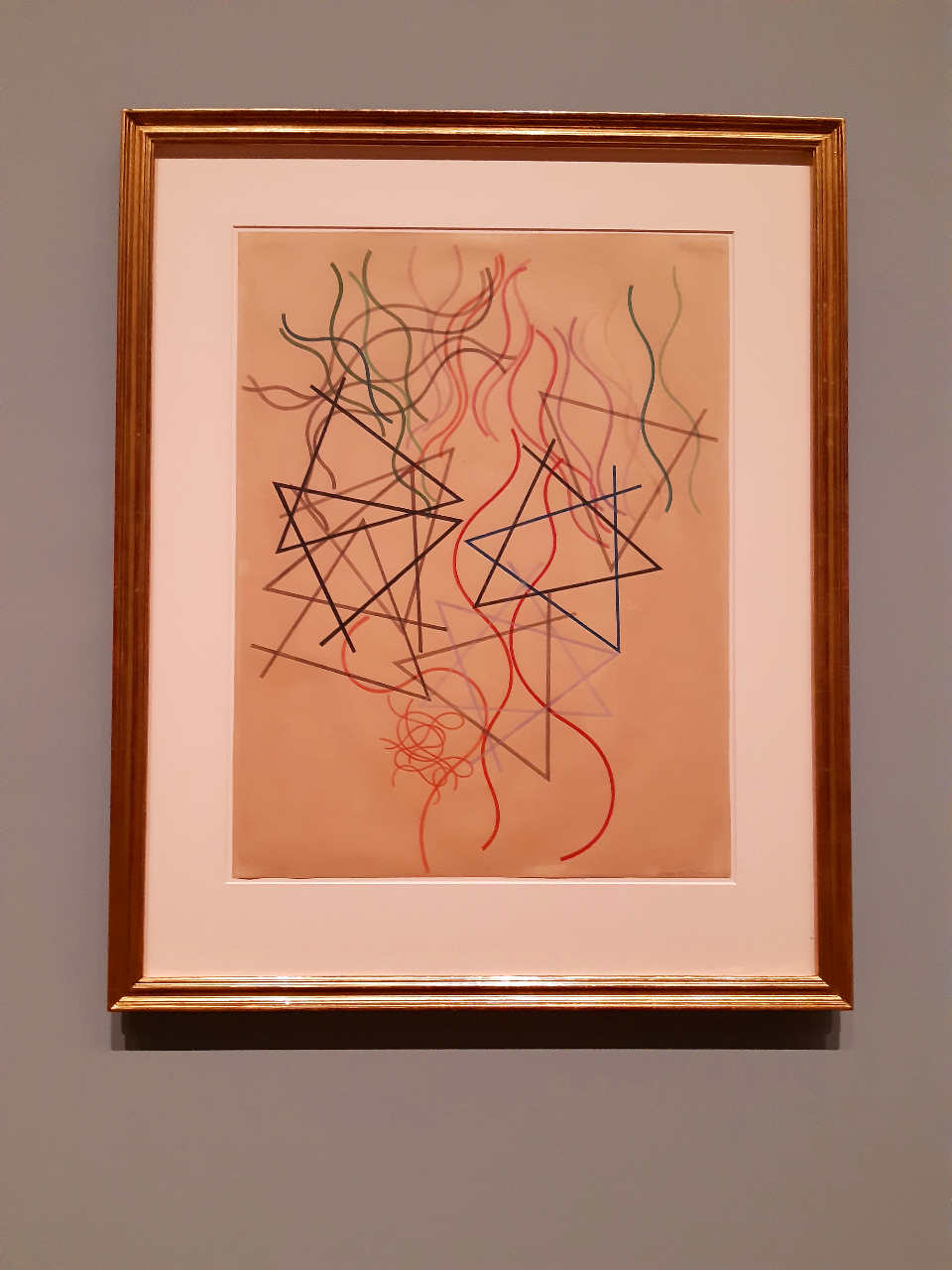 Sophie and Hans/Jean had returned to Zurich in 1942 in order to secure their safety and continue their work as artists. Sophie Taeuber-Arp tragically died from carbon monoxide poisoning in Zurich in January 1943 cutting short the life of one of the early twentieth century’s most important artists. Taueber-Arp’s work was collected by museums in Europe and further afield during her lifetime and after with collections in MoMA in New York and various museums in Germany.

As with many female artists Taueber-Arp is somewhat forgotten within the canon of both Modernist, Dadaist, and twentieth century art. The fact that she is still widely unknown nearly eighty years after her death is unfortunate and hopefully the exhibition at the Tate Modern towards the end of last year will re-institute her in her rightful place in the canon of art history.

(c) All photos and text copyright of myself unless stated.