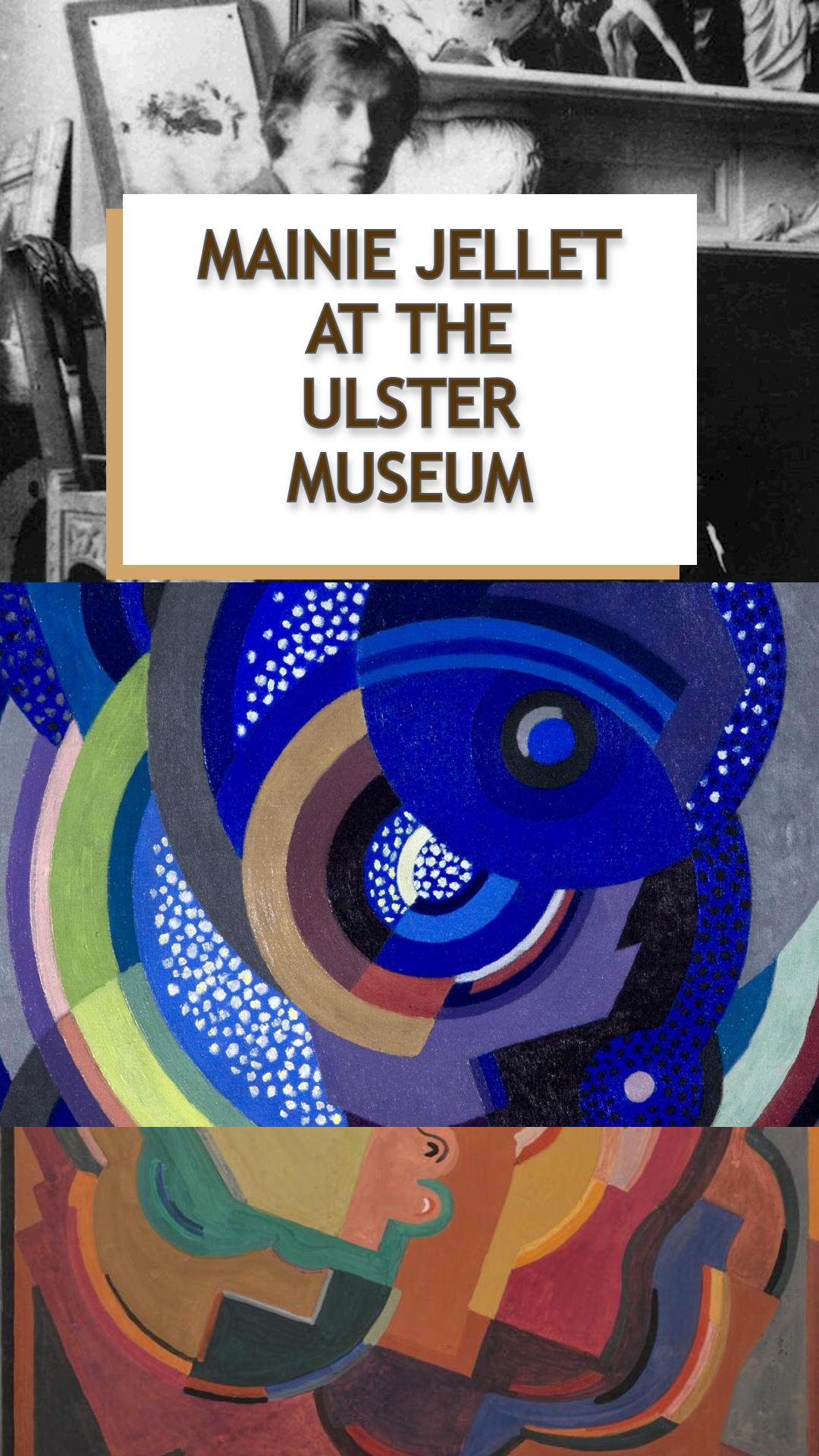 In April of this year I had the great good fortune to visit the ‘Mainie Jellett (1897-1944): Translation and Rotation’ (October 2021-May 2022) exhibition at the Ulster Museum, Belfast. This exhibition focused on the work of Mainie Jellett, an Irish artist, who is credited with introducing Modernism to Ireland after looking to European art movements for her artistic inspiration. 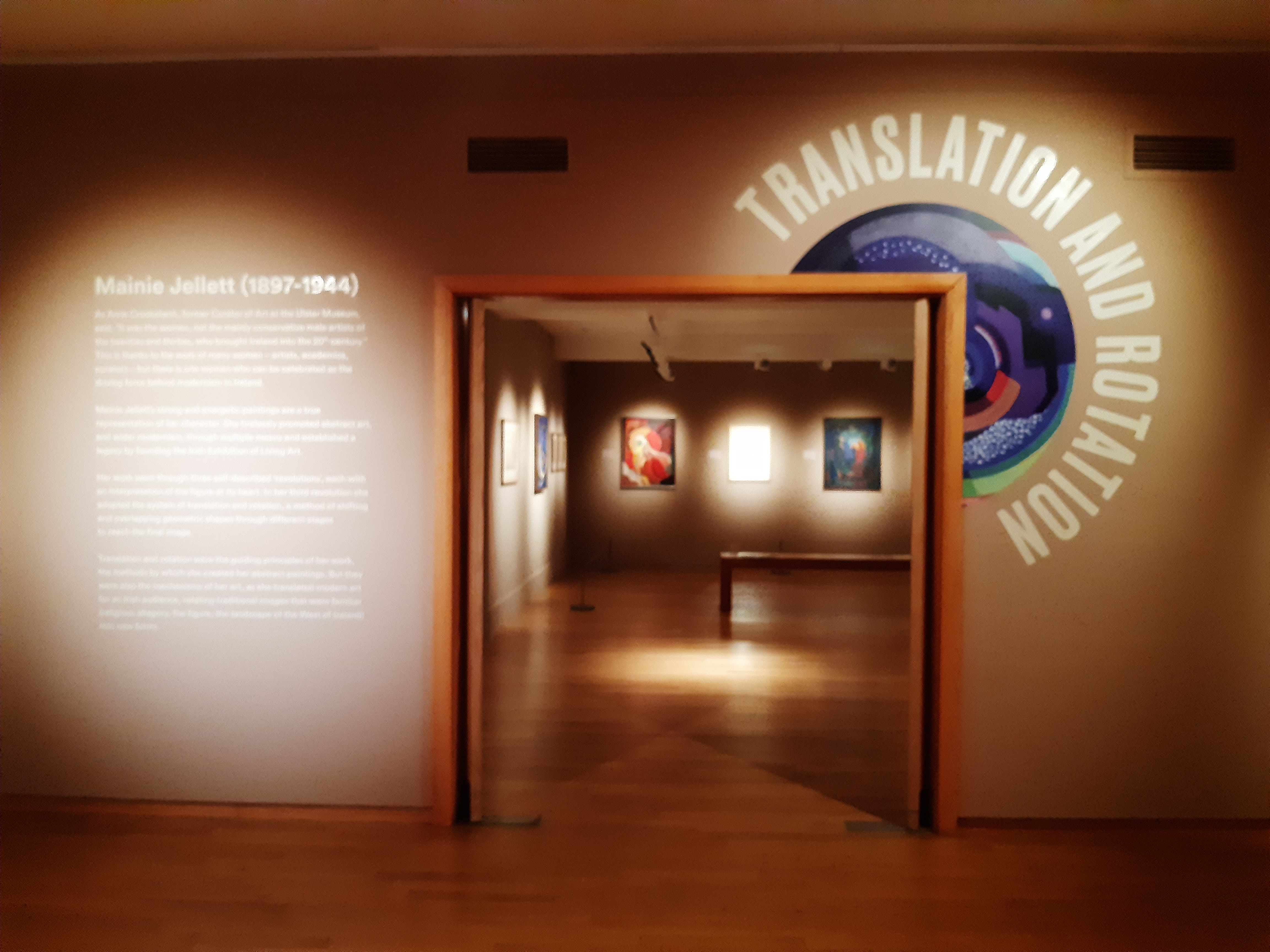 Mainie Jellett was born in Dublin in 1897 into a family of four daughters who all received a liberal and artistic education with painting lessons being given by Elizabeth Yeats and Mary Manning. Mainie’s elder sister became a famous conductor of the orchestra at the Gaiety Theatre in Dublin and her aunt Eva Jellett became the first woman in Ireland to receive a medical degree from Dublin University before undertaking doctoral work in India.  After a lively and creative childhood inspired by her female relations Mainie was still unsure if she would go into music like her mother had or continue to pursue her love of painting. Mainie had studied under William Orpen at the Metropolitan School of Art in Dublin and in 1917 she went to study art at the Westminster Technical School leaving in 1919 when she was in her early twenties.

The exhibition at the Ulster Museum is laid out somewhat chronologically describing Mainie’s early life, education, and artistic influences as well as some early works. The paintings are on a background of soft peach with small, rectangular labels in white on a pink background to the right of each painting or drawing. The labels inform but do not take away from the art works. Similarly the inclusion of several paragraphs of text again in a white, readable font introduce each section. The exhibition text is not overly wordy and is appealing to those interested in art and those only learning about art alike. 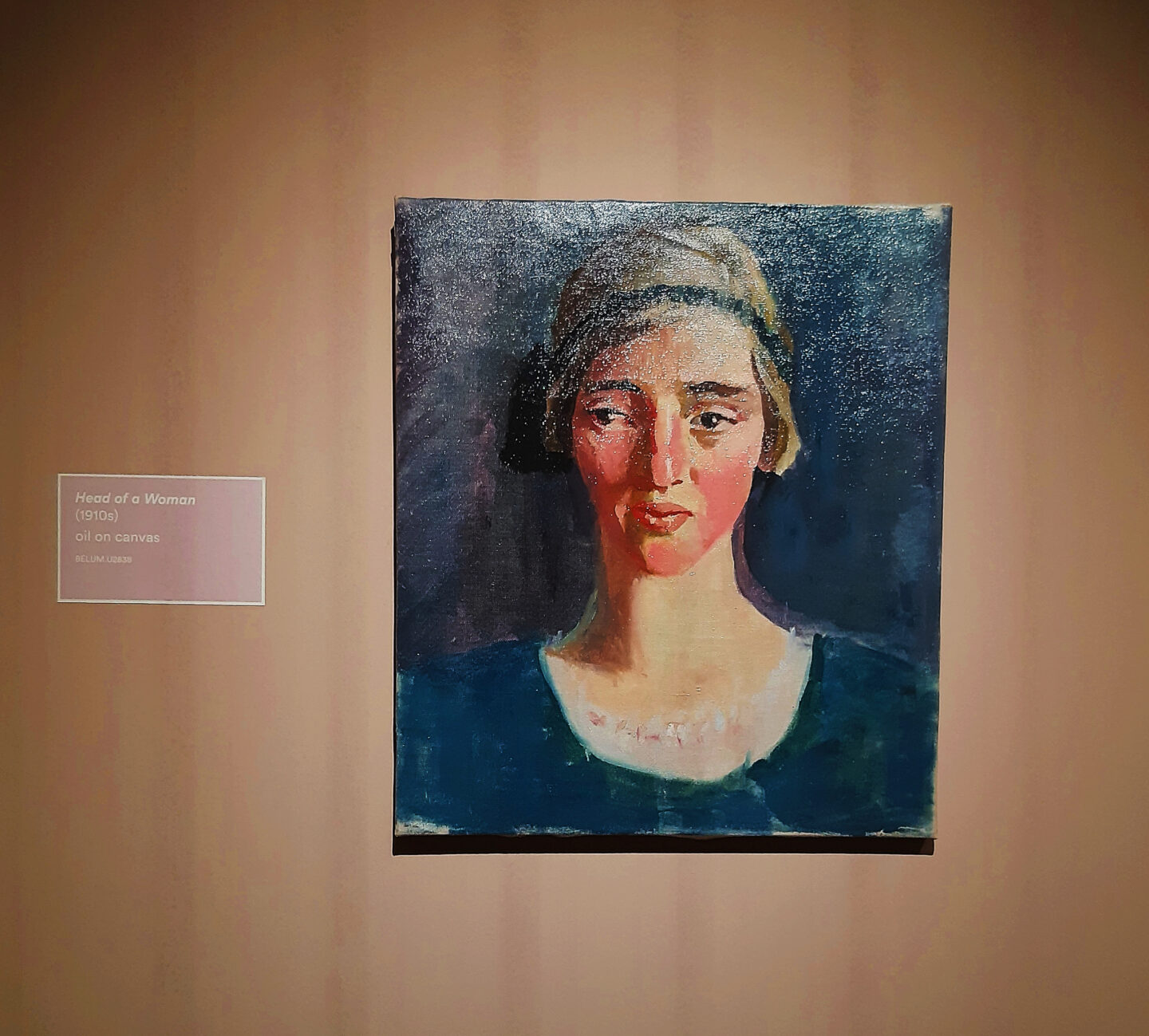 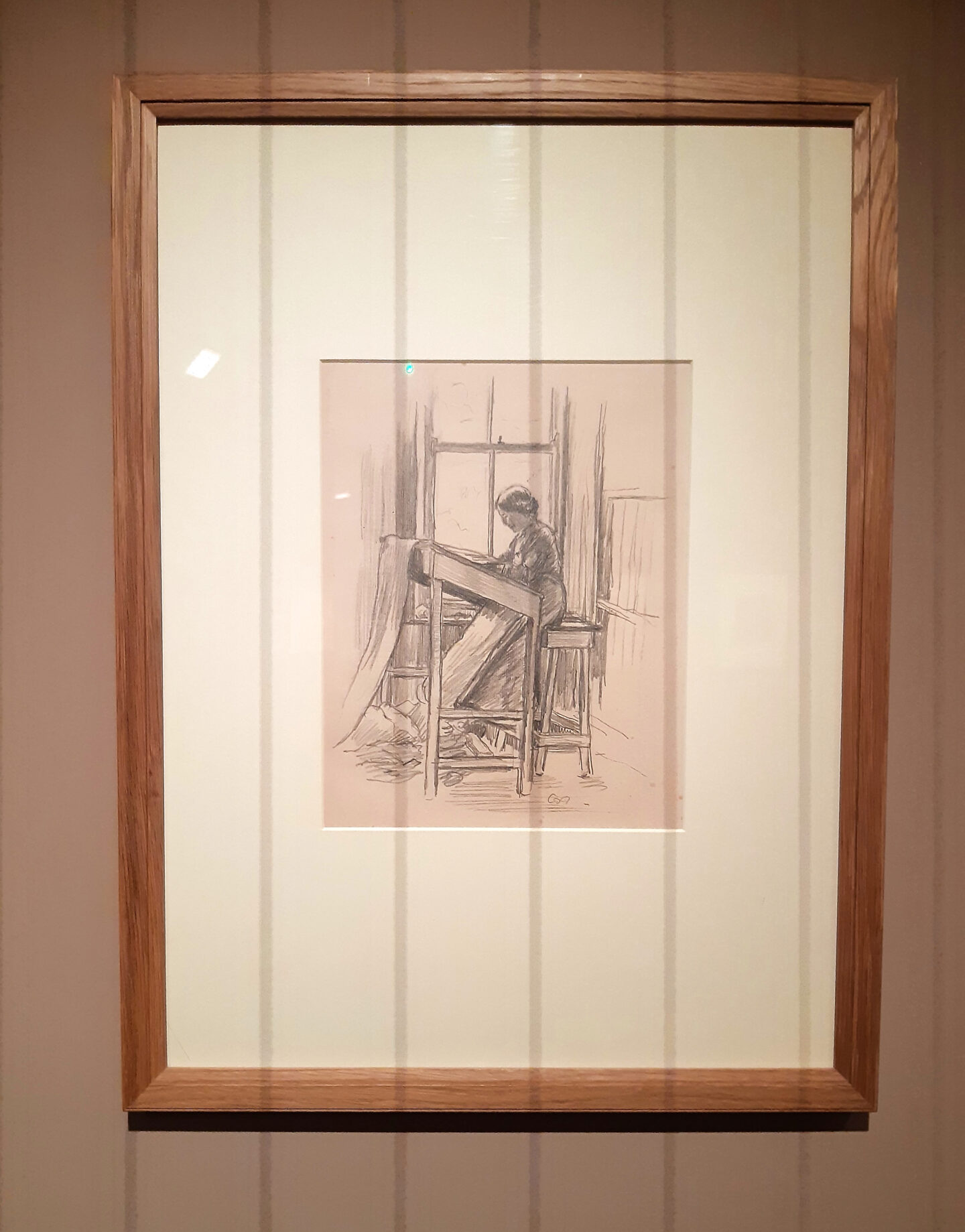 It is from this period of her training that some of her earliest known works survive including the portrait in oils below and the sketch of a woman perhaps sketching or sewing at high desk are from this pre-modernist period.  In 1920 Mainie let for Paris with fellow artist and stained glass painter Evie Hone and went onto to study under Andre Lhote and Albert Glezies. In Paris she first encountered Cubism which was to change her way of thinking about and making art forever.

The exhibition at the Ulster museum featured both of these early works as well as early works inspired by Cubism from her period in Paris. The slow progression from figurative art works to abstract art work was carefully and subtly included and before the viewer realized the viewer had arrived at Jellett’s abstract work. This bit of subtle, yet effective curation made me feel that I was being informed of Jellett’s change in artistic direction without being overwhelmed with extra information. 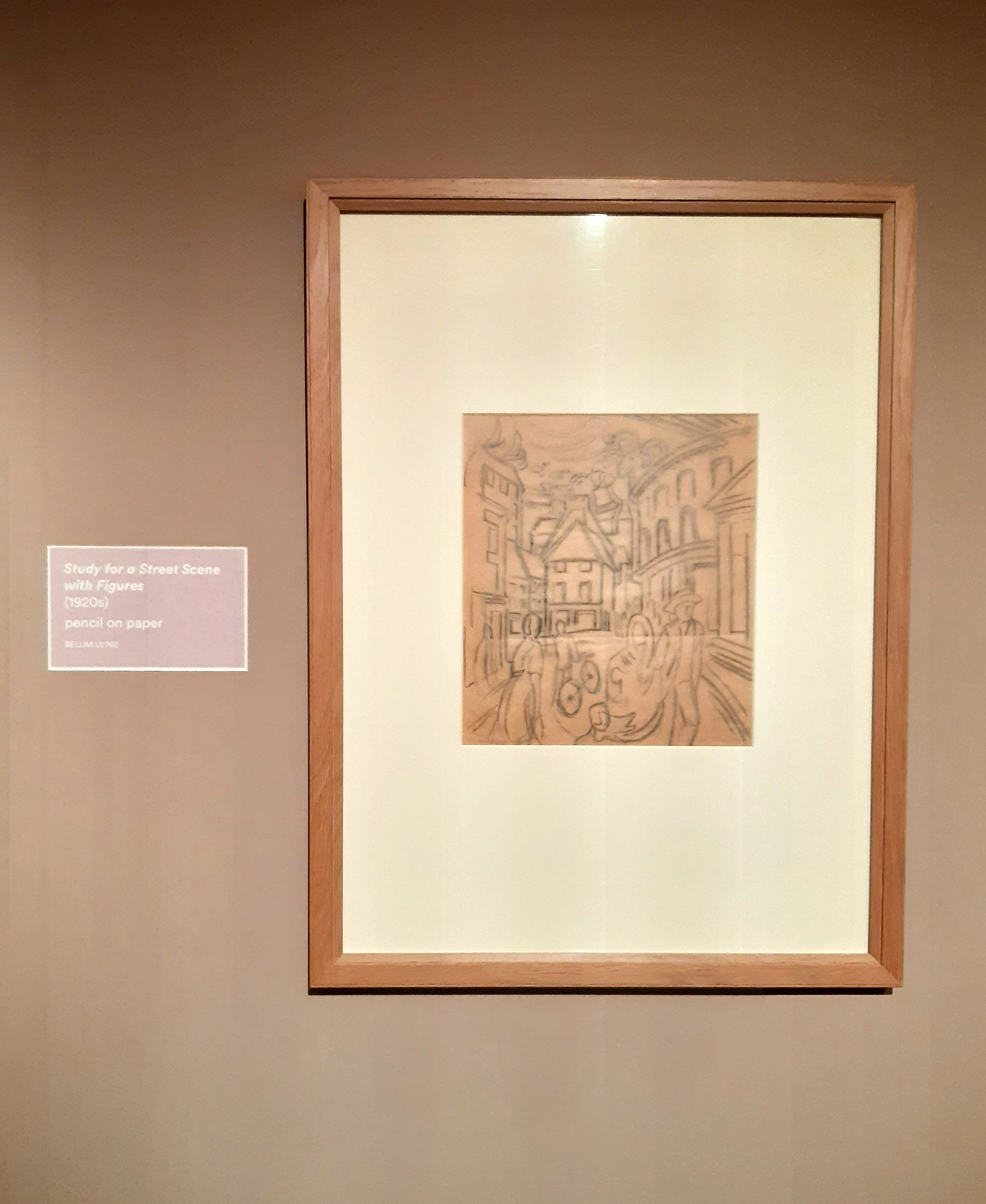 By discovering Cubism Jellett began to work within one of the latest, modern art movements in development across Europe. She was fascinated by lines, shapes, colour, and rhythm which is evident in her sketches and paintings from this period. Hone and Jellett left Paris for Dublin in 1921 but returned year after year to keep abreast with European art developments. In later life after an artistic career mainly spent in Dublin Jellett described her artistic life in terms of three ‘revolutions’ – one studying under Walter Sickert, another under Andre Lhote, and the third Albert Glezies.

This period of Jellett’s work was beautifully represented in both striking paintings, early sketched drafts, and drawings which charted her development and interests as an artist. Additionally, curatorial emphasis has been placed on how Jellett was inspired by both Christian and Celtic art which is evident in some of her paintings and drawings which are highlighted below. Unfortunately, the new Irish state were hostile to both Jellett and other modernists work; with a showing of her works in the mid-1920s meeting mixed and unimpressed reviews by art critics. As the 1920s wore on Jellett’s deeply Christian faith inspired by the art of Christian Iconography can be seen in her work if the viewer looks close enough. Jellett took the basic shapes of e.g. a Madonna and Child and rotated them and transformed them until sometimes they barely resembled what the original icon represented. Jellett was influenced by the lines, decoration, and presentation of Christian icons and this was an inspiration in her art that lasted well into the 1930s. 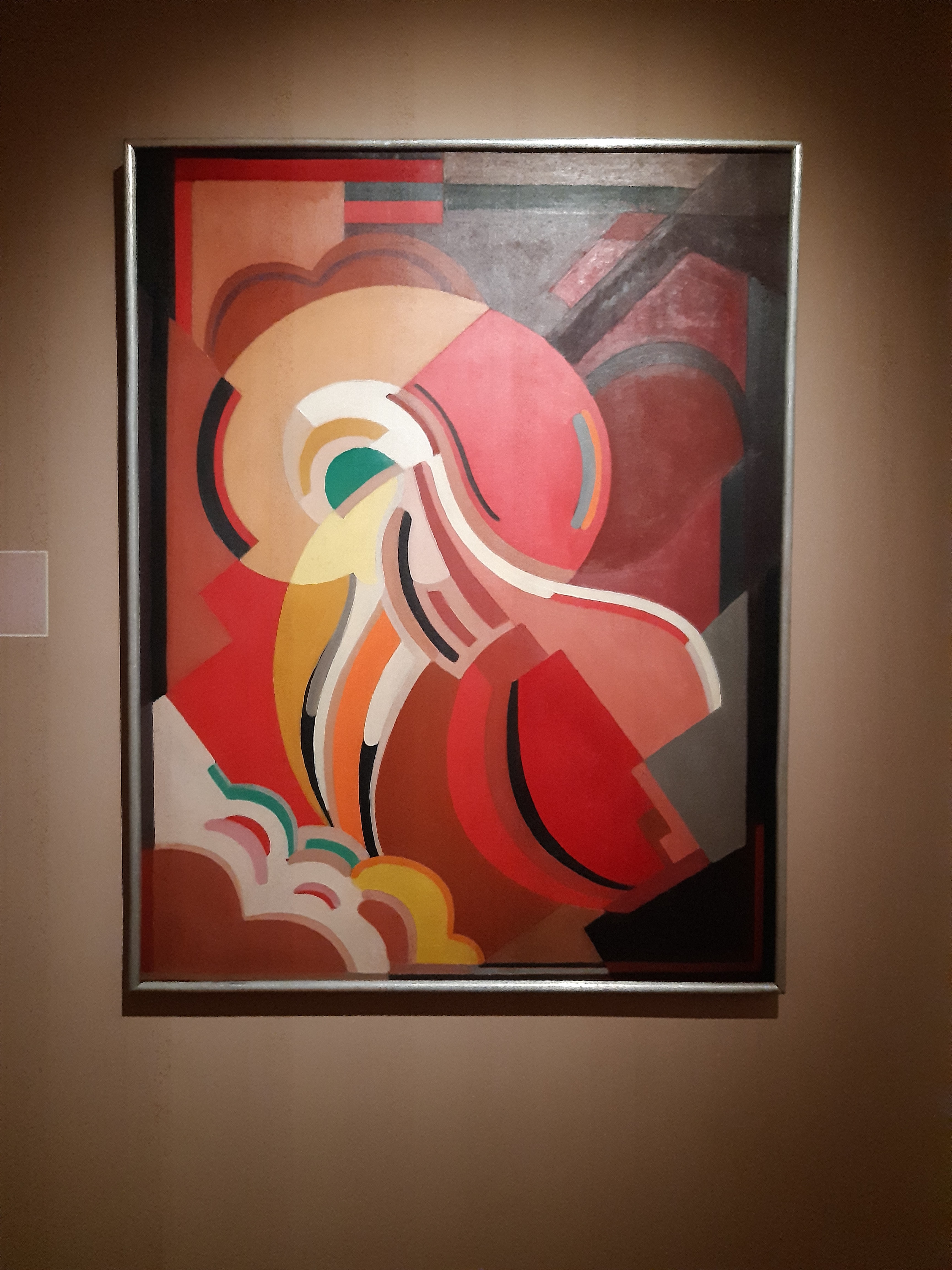 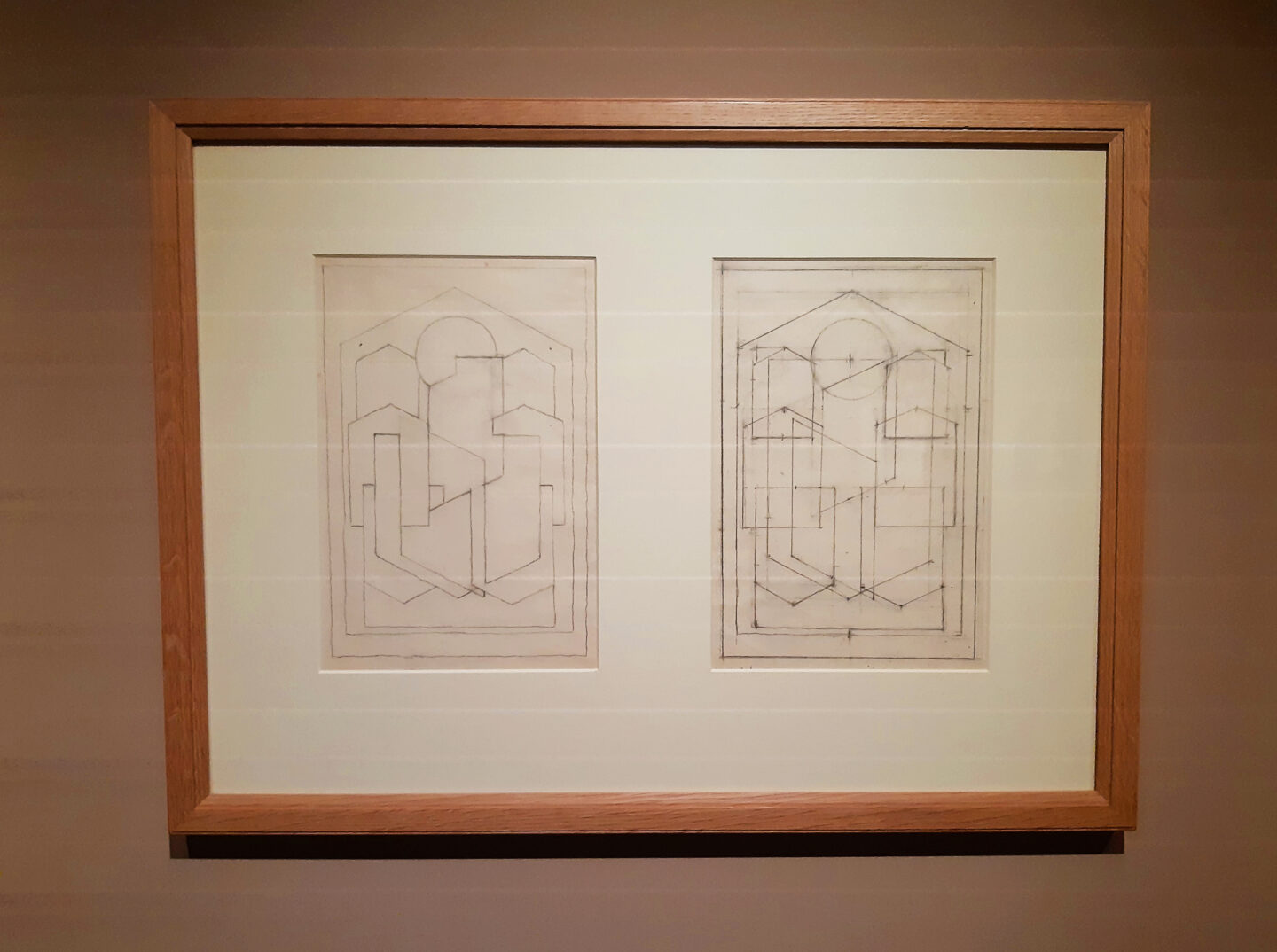 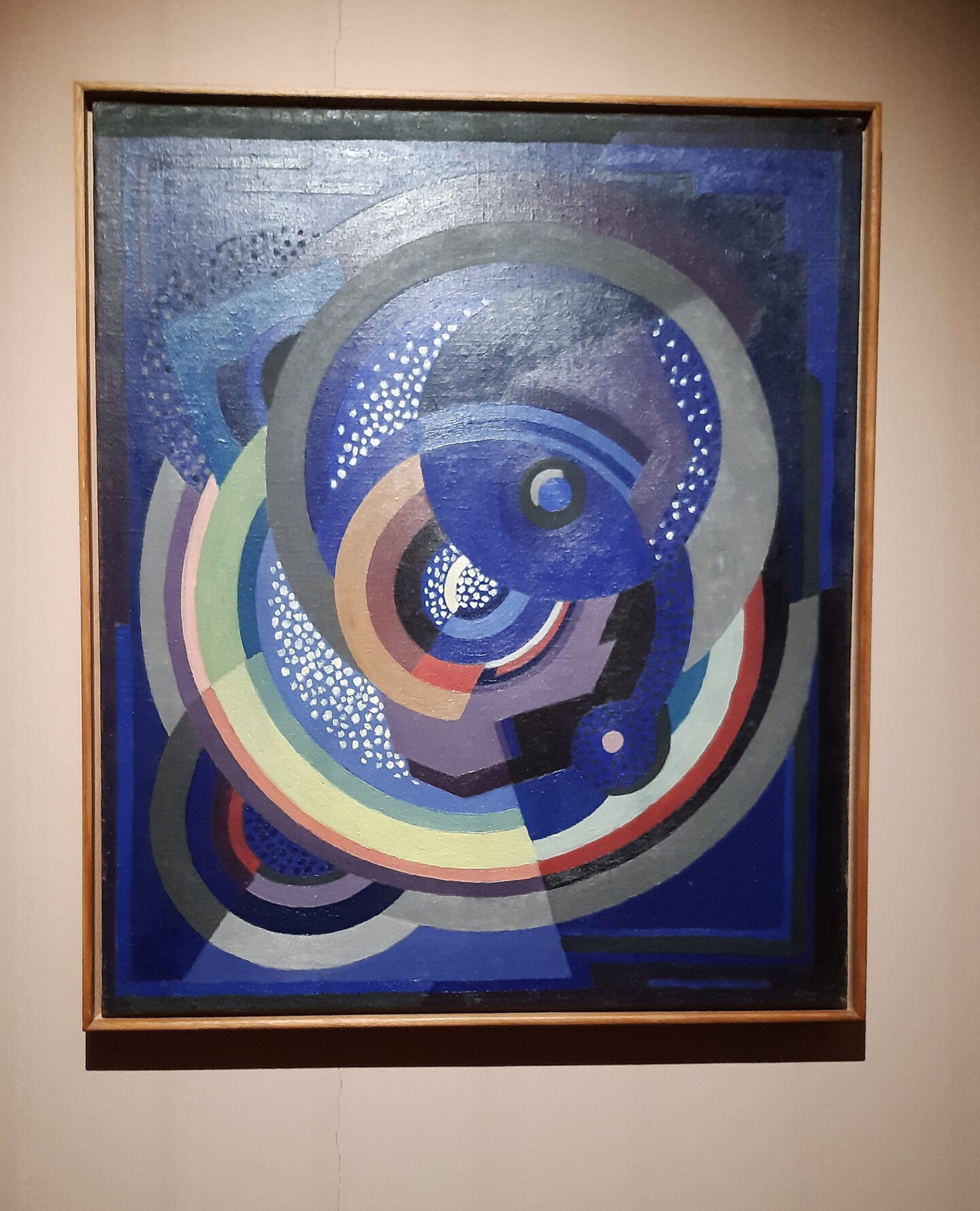 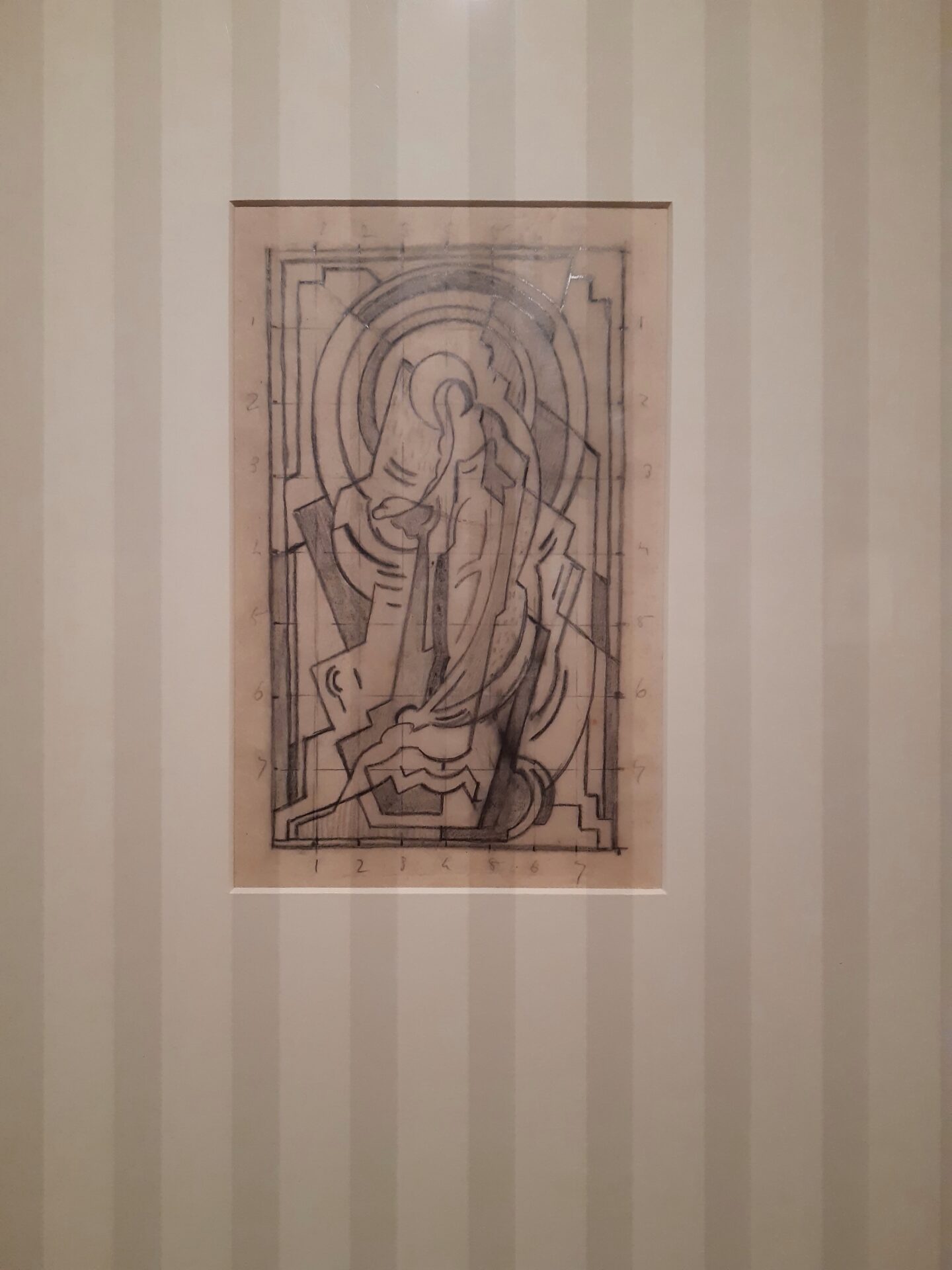 In the 1930s Jellett continued to work as a teacher and an artist and returned to her early figurative style whilst also simultaneously being influenced by Celtic and Christian art. Jellett throughout her career looked outside of Ireland for artistic influence but also looked within Ireland for extra influence from Ireland’s deeply artistic past. By reflecting and transforming modern art infused with Irish influence Jellett’s work became more accessible to the Irish public who at a time were deeply reflective of their own, inner cultural life rather than being influenced by modernist European culture. 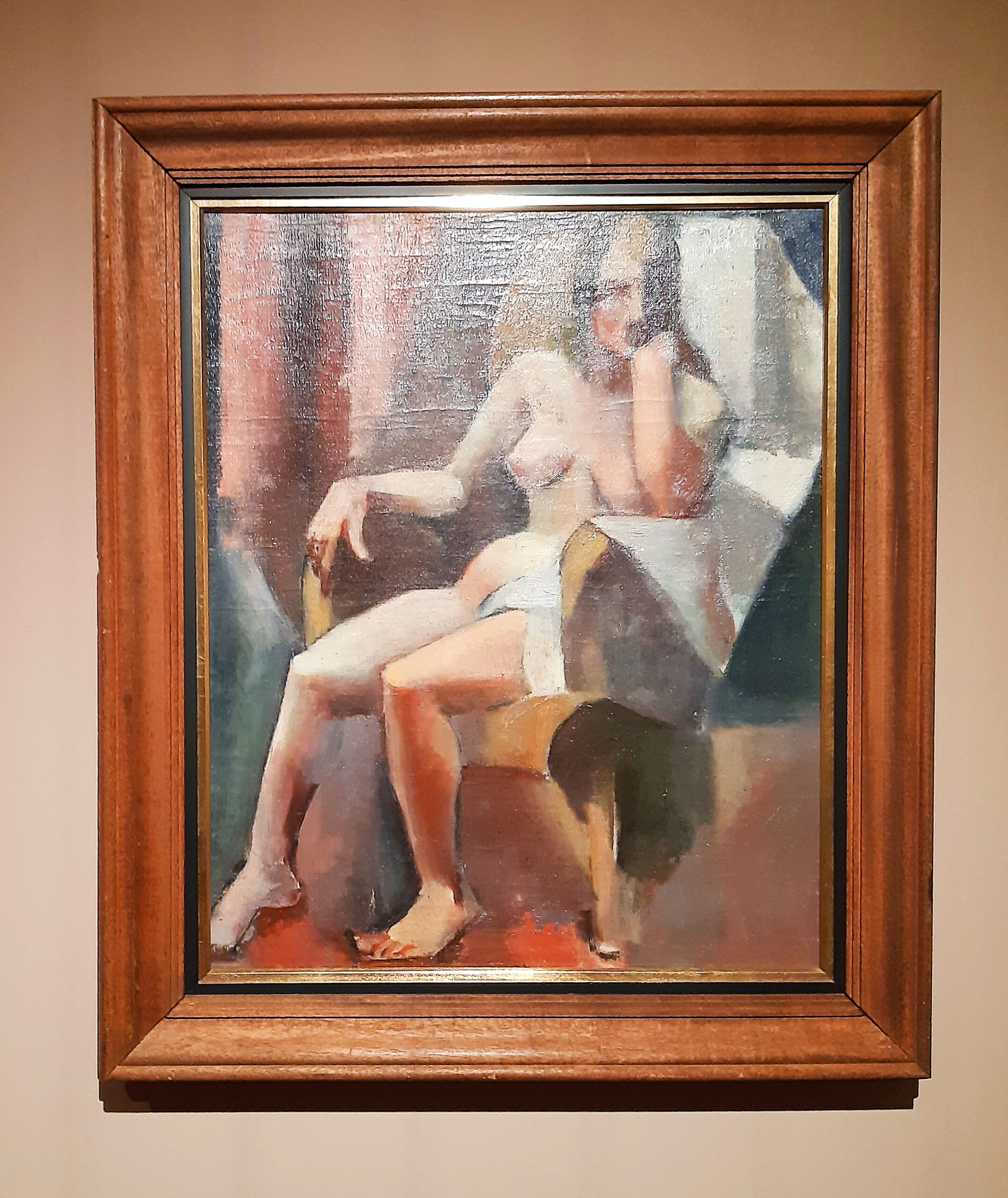 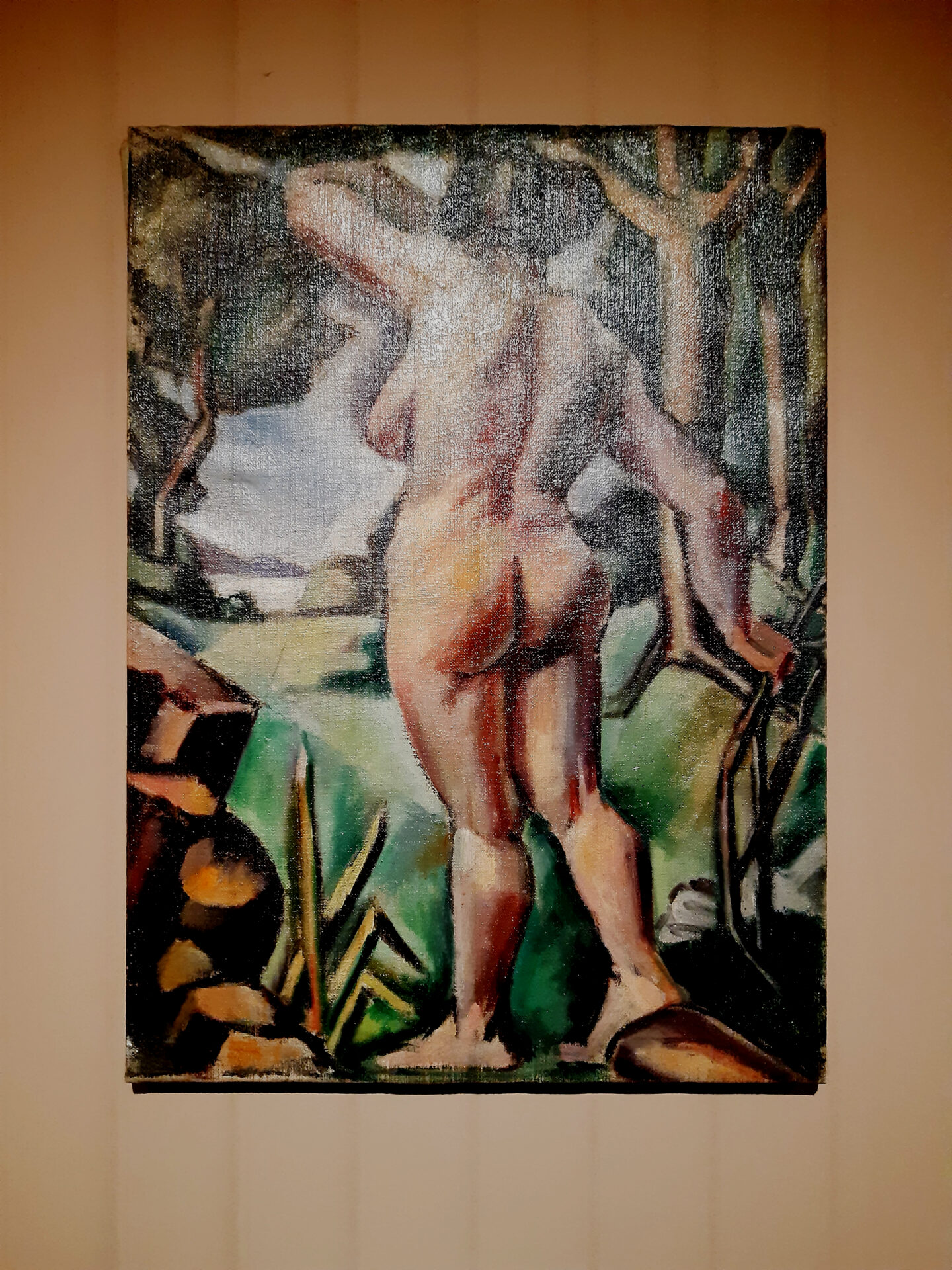 Sadly, like is the way with a lot of female artists, Jellett’s true genius was not wholly appreciated in her lifetime and her early death in 1944 did little to heighten this. Her early figurative works were found by her sister in a trunk as Mainie did not think that people would be interested in her earlier works – a sad plight for many artists male and especially female. Mainie Jellett will be remembered as a pioneering Modernist Irish artist who helped bring Modern art to Ireland as well as helping set up the Irish Exhibition of Living Art slowly before her death in 1944. 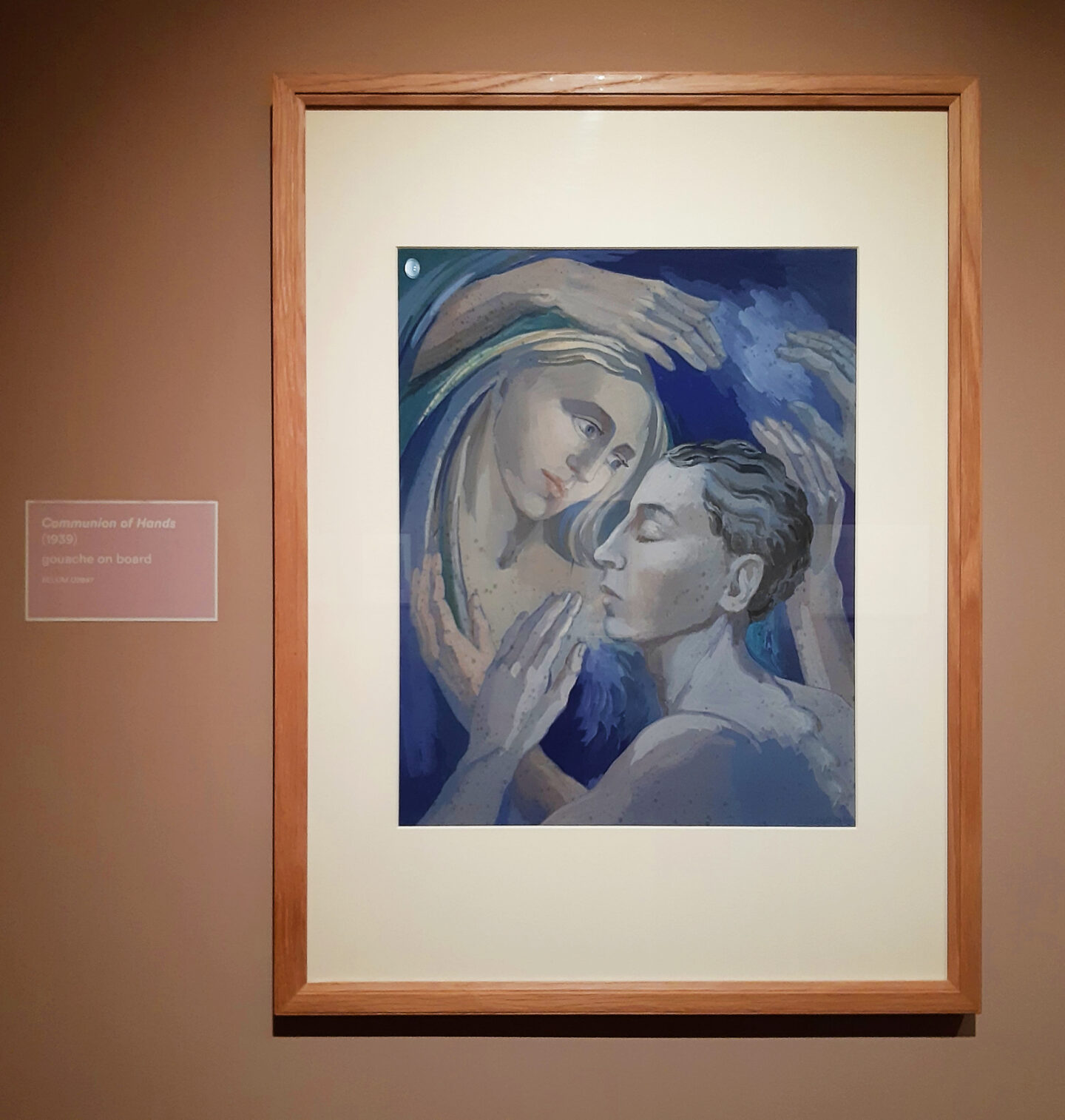 It is thanks to exhibitions at museums like the Ulster Museum that we can once again appreciate Mainie’s paintings and sketches and celebrate a life cut tragically early by cancer. By introducing Mainie to a new generation museums and art galleries alike can guarantee her legacy and body of work will live on into the future. 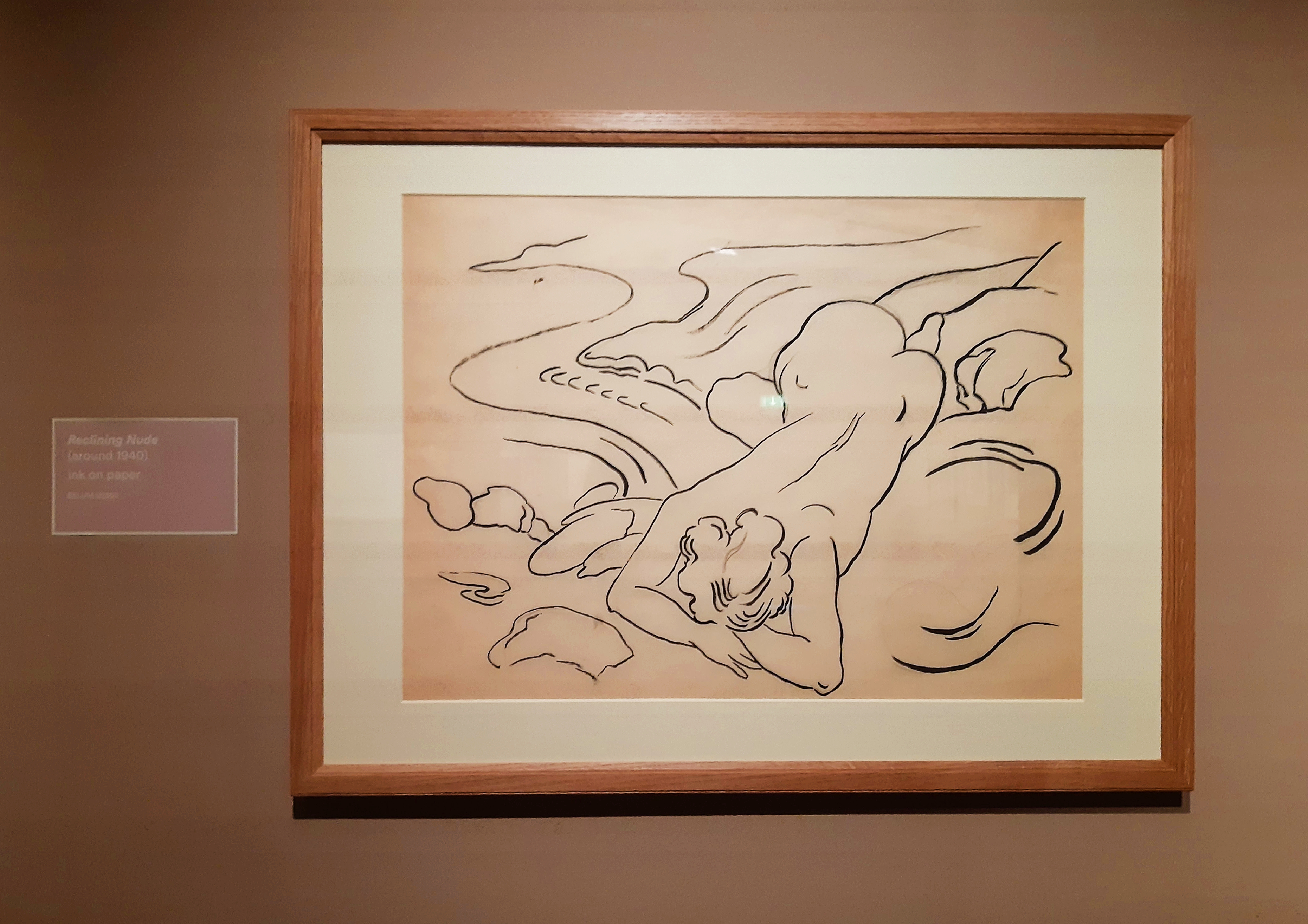