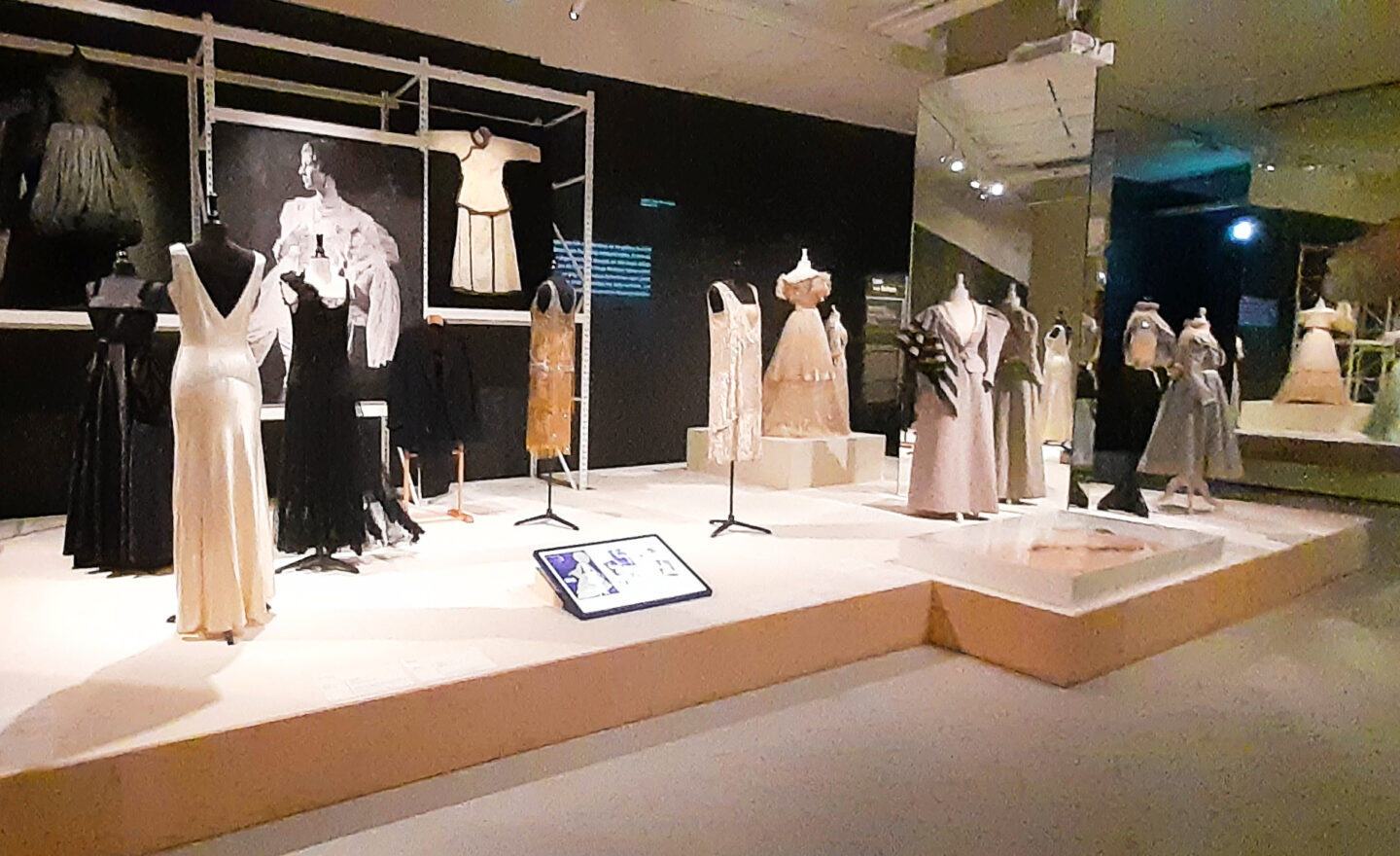 Want to more about late 19th and early 20th century fashion and dress? Then read on for more insights and thoughts from me on a fantastic fashion exhibition I visited in August in Hamburg, Germany!

Following on from my first blog post  on the recent ‘Dressed – 7 Women / 200 Years of Fashion’ exhibition this blog posts explores the dress of the late 19th and early to mid 20th century. As covered in my last blog post the beginning of the exhibition concentrated on the early to mid-19th century in dress and fashion. This is an era I must admit I am not overly knowledgeable about but hope that my blog post was at least interesting for the lovely clothing alone!

As the exhibition moved chronologically along (my historian heart sung with joy as I prefer exhibitions that move across a timescale rather than thematically!) the next part of the exhibition displayed clothing of the wife of a wealthy German industrialist. The clothing ranged from the lacey elegance and exaggerated waistlines of the 1890s and early 1900s to the Grecian inspired lines of 1930s fashion.

The dresses pictured to the left belonged to this woman as a young teenager and then as a young debutante in early 1900s Germany. If the stripy blue dress with ‘puffed sleeves’ isn’t more of an Anne of Green Gables dress then I don’t know what is! I absolutely adore the blue and white stripey material but perhaps would have less lace about the shoulders but would totally wear this dress today!

The second dress is made to beautifully accentuate the waist of the young woman who wore this dress possibly at some of her first balls. The clean lines leading from the lower centre back to the upper centre back with blue covered buttons and pleated fabric to either side of the back of the dress clearly highlight a slim and corseted waist fashionable in the early 1900s. Both dresses appear to be made out of either a heavy cotton or crepe-de-chine or a silk-like material and though the material has faded in the evening dress it appears that the wearer preferred a palette of blues and muted pastel shades for both day and evening wear. 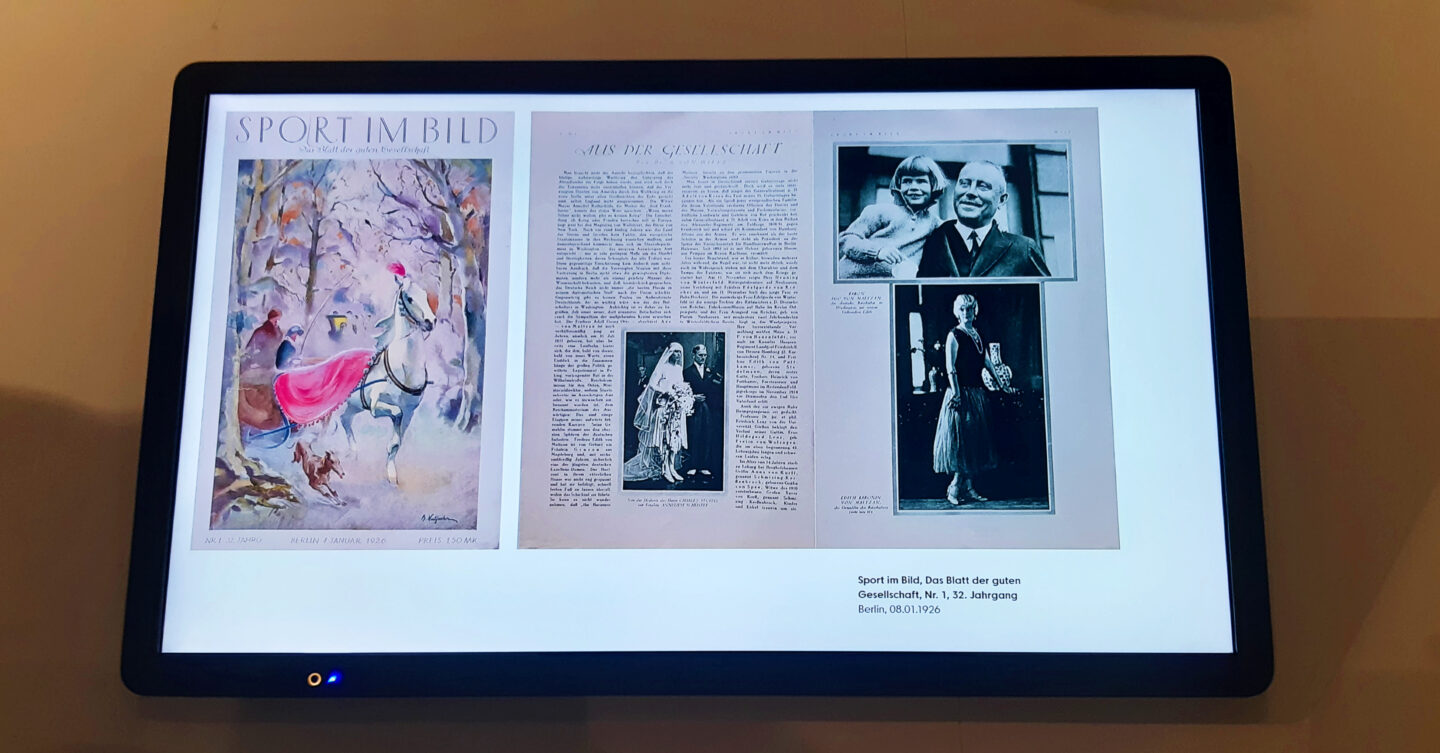 Alongside this display of dress there were several interactive tablet screens depicting fashion magazines, advertisements, dressmakers, and other influences on style in the early twentieth century. These scans were of the highest quality and you could pinch and zoom into the screen to read the text and see the pictures up close. Coupled with an informative label these screens give the viewer better knowledge of how the women who wore the dresses pictured above and below was inspired by the latest fashions. I found the addition of interactive screens highly effective and informative as normally supplementary material within museum exhibitions is static and behind a screen of glass; being interactive and with several sources the screens give the viewer a better idea of what influenced fashion between 1890 and 1940.

One effective method of curation in this central part of the exhibition was displaying the dresses also chronologically manner i.e. the older dresses on the right from the 1890s changing into the dresses of the early 1900s to gradually the dresses of the 1920s and 1930s on the left hand-side. These dresses included the beautiful peach silk and glass beaded drop waisted evening dress (that could double as a wedding dress!) and the white Grecian inspired 1930s evening dress pictured above. You can also see an enlarged black and white photograph of the women who owned these dresses in all her fabulous frauen flapper splendour in the 1920s – oh to have had her budget for dresses if I was alive in the 1920s would have been a fine thing!

The third section of the exhibition dealt with the fashions of a young woman and mother, Erika Holst, who sadly died of TB in 1946; it is also worth noting that this section covered the years 1933 to 1945 in Germany of which we all know is the Nazi era. This was alluded to but not mentioned in the accompanying exhibition text for this particular section; an effective curatorial tool as to overload the viewer with unwanted information could potentially take away from the items on display. My favourite item in this section of the exhibition was this beautiful black gabardine coat with boucle wool detail on the pockets and collar with fabric covered buttons from the late 1930s. I would completely wear this today with a black beret, black dress, black tights, and black brogues. Absolutely timeless!

The section covering Erika Holst’s wardrobe highlights the thought and care given to the curation of this exhibition. The exhibition text, as you can see above, highlights that Erika had a distinctive style of dress for both day and night. She enjoyed bright colours for evening wear, but wore practical yet colourful clothing for daywear. You can’t see the top of it but this red/yellow/green tartan skirt pictured below is actually a pinafore that would not be out of fashion in the 21st century! This part of the exhibition was augmented with letters, photographs, and other material from the Erika Holst archive which was donated to the museum in 2008 by Erika Holst’s family. To have a collection of clothing and archival material surviving in it’s entirety for middle-class housewife of this period is a rarity. Evidently Erika took good care of her clothes and her premature death at twenty-eight may have heralded the preservation of her personal effects for her children when they were grown up.

Erika had a happy, fruitful life despite living under the Nazi’ regime of the late 1930s; she travelled and lived in London in 1937. She had an exceptional taste in clothing and shoes (see below they are fabulous!) and a great taste in perfume – Chanel No.5 was her favourite perfume; definitely a lady of great taste! It is sad that Erika died at the age of twenty-eight but her legacy lives on in her clothing and it was particularly poignant to see pictures of her with her children (see a picture of Erika with one of her children in the background of the photo of the black coat) who could also get to know her despite her early death through her clothing and personal archive.

In the next blog post I discuss more in-depth about the curatorial decisions taken in both the display and layout of the exhibition and how this exhibition has influenced me as both a curator and a historian.