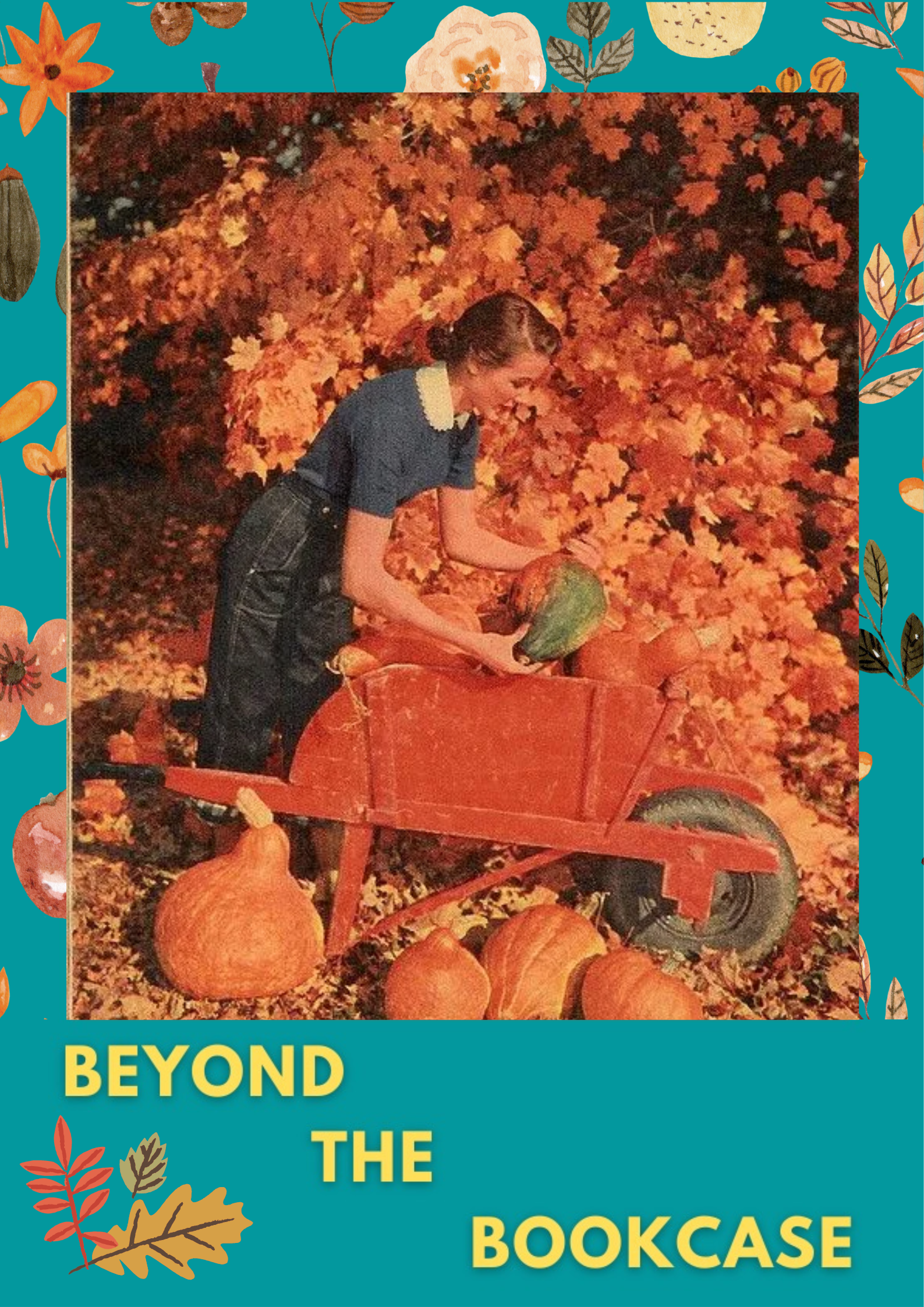 I write this blog post on what is probably the first truly Autumnal day of the year in Ireland; rainy, windy weather coupled with a noticeable drop in temperatures have hailed the arrival of the new season. All that I want to do on a day like today is to stay inside drink tea, listen to the radio, and read something cosy and purposefully set in autumn or with autumnal themes.  Read on for three ‘Beyond the Bookcase’ autumnal edition reading recommendations!

The School at the Chalet – Elinor M. Brent-Dyer. 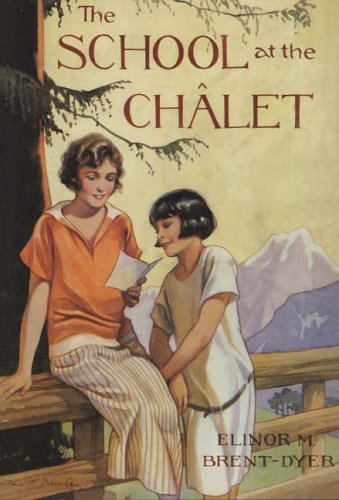 The School at the Chalet is the first in a series of sixty-four school story books written by Elinor M. Brent-Dyer an English author who published widely in her life-time with the majority of her books centred around various girls schools. At the time that this book was first published, in 1925, Brent-Dyer could not have anticipated that nearly 100 years later people would still be reading her books. The Chalet School books have a somewhat cult devotion amongst their fans and have been regularly re-published since Brent-Dyer’s death in 1969.

This first book deals with Madge Bettany setting up a school for girls in the Austrian Tyrol in order to earn a living whilst also looking after her younger sister, Josephine (known as Joey) Bettany who has health problems. It is felt by Madge and their brother, that the climate in England is too damp for Joey to fully recover and that the dry, crisp, and clean mountain air of the Austrian Tyrol will be perfect to help Joey on her way to recovery.

They open the school with very few pupils and teachers and very little furniture other than what they can find second hand. Gradually the school and it’s pupil’s grow to the extent that they will possibly need to re-locate to a new building soon or extend the chalet they are already in. Many of the new pupils are from across Europe including France and Italy and are of all ages and academic ability. There is a strong emphasis on friendliness to your neighbour irrespective of where they come from. Though there are funny incidents in the book when the girls get in trouble or wander off where they are not supposed to coupled with the hot-headedness that can come when a lot of teenage girls are under one roof!

Although the school opens in the Spring the ‘back-to-school’ feel is evident throughout the book and is great to get into that autumnal feeling! The characters are wonderfully written with care and insight by Brent-Dyer without being too stereotypical of the time period the books were written in. Perhaps this is where the magic of the Chalet school books lie; they appeal to readers of all ages across the ages. Additionally, there is also drama, suspense, romance, and sometimes upsetting themes but overall this book is a wonderful light-hearted read that will make you want to read more of the excellent Chalet School books!

Post after Post-Mortem: An Oxfordshire Mystery by E.C.R. Lorac has recently been re-published by the British Library as part of it’s British Library Crime Classics  series. Until this book was re-printed by the British Library it had not been re-printed since it’s original publication in 1936 and trying to buy one would cost you a small fortune. E.C.R. Lorac is probably one of the least known of the writers from the Golden Age of detective fiction (E.C.R. Lorac continued to publish in the 1940s and 1950s after the end of the Golden Age ended) and I had not heard of her until listening to one of her other murder mysteries Crook o’ Lune: A Lancashire Mystery on audible last year.

Post After (I’m naming it this so I don’t have to write the full title out each time!) is set in the realm of book publishers, academics, and bibliophiles. The Surray’s from the bulk of this realm as they are a prolific family of authors, academics, publishers, and other jobs that require a high intellect.  Set in an rural Oxfordshire and about Oxford academics the Surray’s; the family but enormous pressure on themselves and each other to always be the best at everything they do to such an extent that the middle sister, Ruth Surray, a famous author herself, takes her own life and a series of highly unpleasant events start to take place after her death.

This book has you on edge to the very end; there are police chases to the outer Hebrides, a fire that could have killed the entire family, and poisoned hot chocolate to name but a few of the mysterious happenings in this novel. Where E.C.R. Lorac exceeds in my opinion over other Golden Age detective novels is her use of a central theme coupled with a wide array of characters and out-standing description of land-scape, cities, countryside, and towns. Post After has all of these tropes with particular reference to the description of the wildness of the Outer Hebrides that Lorac knew well due to holidaying their herself. The audio book really brings this book to life as it draws out the personalities and idiosyncrasies of each character perfectly in the voices of the narrator. A highly recommended book of suspense, murder, and mystery as the nights draw in and you need something cosy yet riveting to read! This delightful black and white image is of the small village of Zennor, near St. Ives in Cornwall. Taken in 1897 the village has not changed much with it’s twisty, winding roads and crop of stone out-buildings when it’s viewed on Google maps. I had to google where this village was after reading the utterly fantastic Zennor in Darkness by Helen Dunmore.

Zennor is set in 1917 a little over a year and a half away from the end of the Great War in November 1918. Until now Zennor due to it’s remoteness had been somewhat free from boys going off to war, blackouts, U-Boats, and whisperings about everyone’s neighbour in accusations of spying to pilfering from the black market.  By the time this novel starts the black out has just started, U-Boats have just been spotted, and the paranoia of thinking anyone who is different has just started to penetrate this tight-knit community.

The story centres around the central character Claire Coyne, an artist from a large fishing and farming family who was brought up Catholic instead of in the Methodist religion of her mother’s family. Whilst this is not a central theme in the book the differences in religion does seep it’s way into the spying element of this book when people begin to whisper that Catholics can sin and spy and be forgiven at confession on a Sunday. Claire has always had a close relationship with John William, her cousin, and this book beautifully depicts how those left at home could not understand how who those that go of to war aren’t the same when they return. John William is training to be a doctor and an officer when he returns home on leave to disastrous consequences for him, Claire, and Zennor at large. Coupled with a strange author (D.H. Lawrence) and his German wife living on a cottage on the desolate Zennor headland this book brings the strange-ness and uncertainty of war and a rapidly changing war to the forefront whilst highlighting that being different, particularly if you are German, goes against the grain of what has always been.

Though I feel that the inclusion of D.H. Lawrence and his German wife Freida did not add to the story and could have been left out I felt that their ‘otherness’ also highlighted Claire’s ‘otherness’ and wanting to know a life beyond Zennor. Ultimately, Claire finds a compromise for both and decides to carve a living as an artist whilst staying in Zennor. Again a must read for those interested in how war changes communities of all sizes and all relationships we have with people.