Another week, another object of the week! Where does the time go to?

This week I will be talking about something that is slightly eerie looking but was a necessity to carry during World War Two. Women even changed their hairstyle so the object could fit around their head!

Here are some clues:

Here are some ladies fitting on the object of the week. Their hair is fabulous. 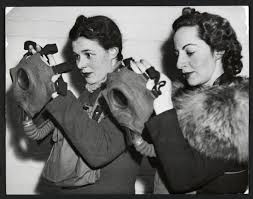 Here are some more fabulous ladies (with fabulous clothes I would give my right arm for!).

Gas mask’s were issued in 1939, just shortly before the outbreak of World War Two on 3rd September 1939. The government feared an initial gas attack, similar to ones used in the trenches in World War One. People were encouraged to carry their gas masks everywhere and there were several different types for women, men, babies and children.

Below is a baby’s gas mask. To look at these things now are quite eerie but they were essential during World War Two. At Mount Stewart, I found a gas mask possibly belonging to a member of the Stewart family. You can see it below

Clearly, you can see the respirator and attached mask. A lot of these gas masks contained asbestos and many years later gas mask users contracted ‘Abestositis.’ It is unfortunate to think that something that was so essential during WW2 caused so much pain after WW2. Still, without these, if there had been a gas attack by Nazi Germany, many people would have died a horrible and painful death.