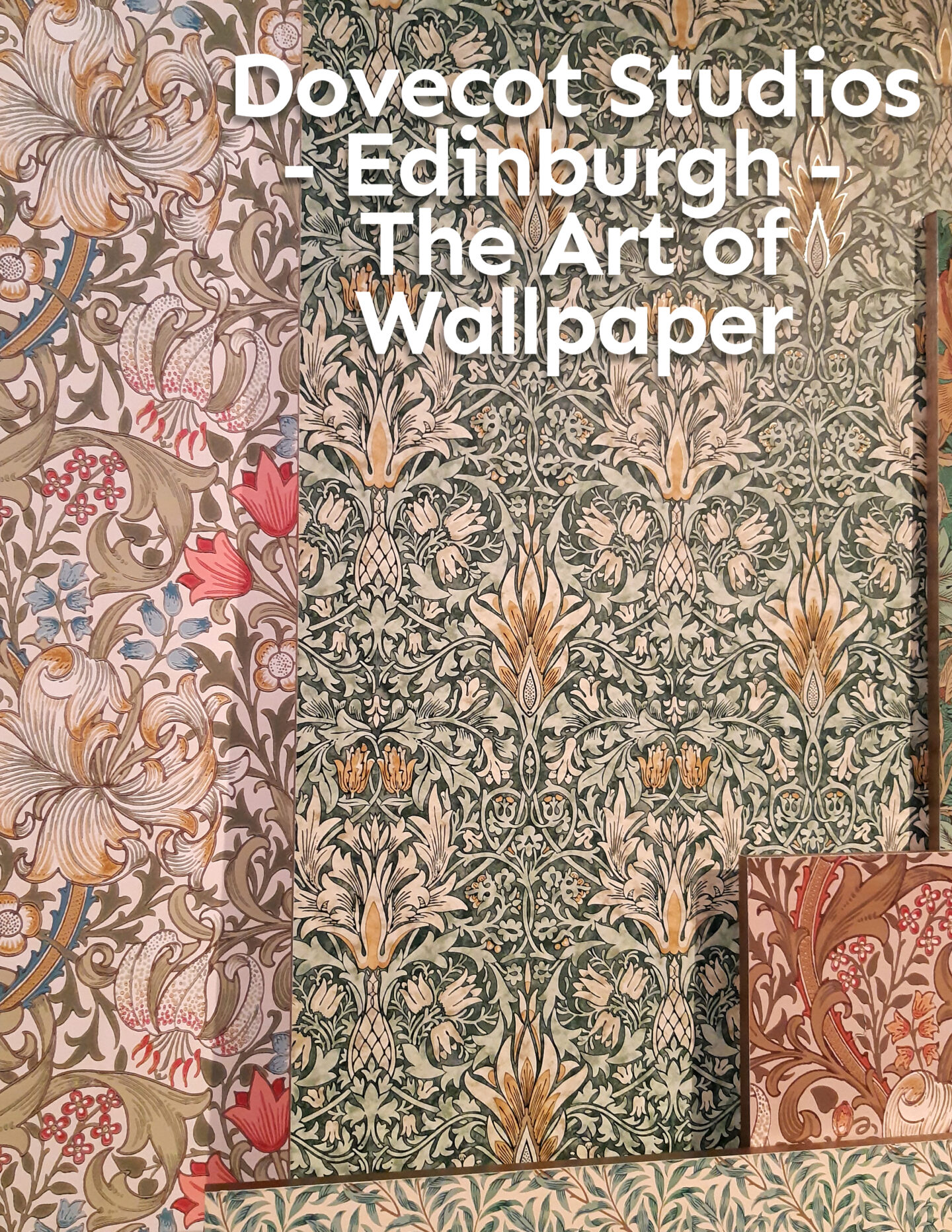 In May of this year on my holiday in Edinburgh I visited the exhibition,  ‘The Art of Wallpaper – Morris & Co’  at Dovecot Studios. I had wanted to visit Dovecot Studios for quite sometime which meant that I was doubly excited that their latest exhibition’s theme was William Morris and his contribution to both interior design and art history. 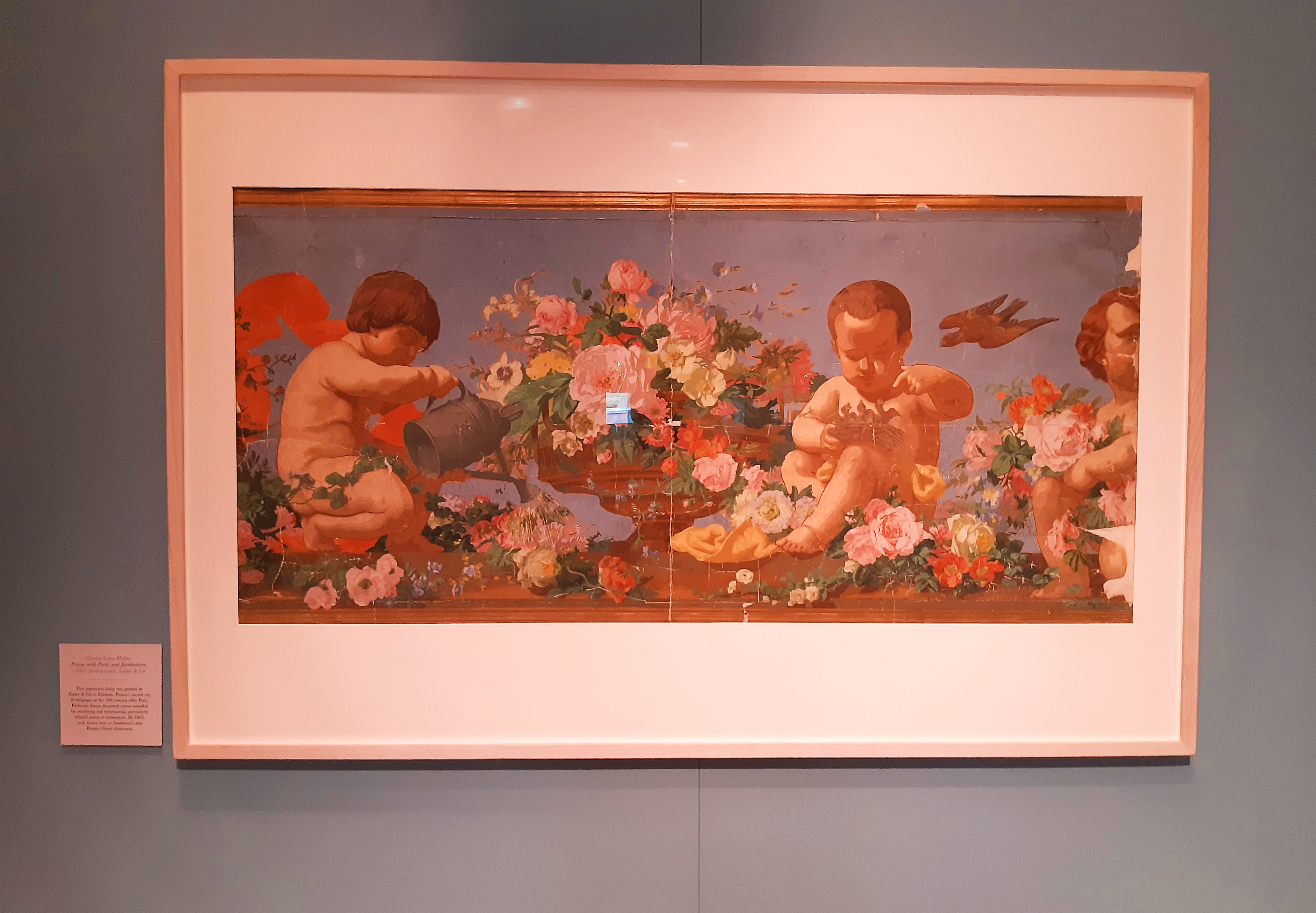 Dovecot Studios is a world famous tapestry studio based in the Edinburgh Old Town first founded in 1912. The current incarnation of Dovecot Studios hosts a shop, exhibition space, tapestry studio, rooms for events and craft fairs, and I can vouch for a café with very, very tasty chocolate brownies! Dovecot Studios are in walking distance of many of Edinburgh’s top attractions including National Museum Scotland and the statue of Greyfriars Bobby. 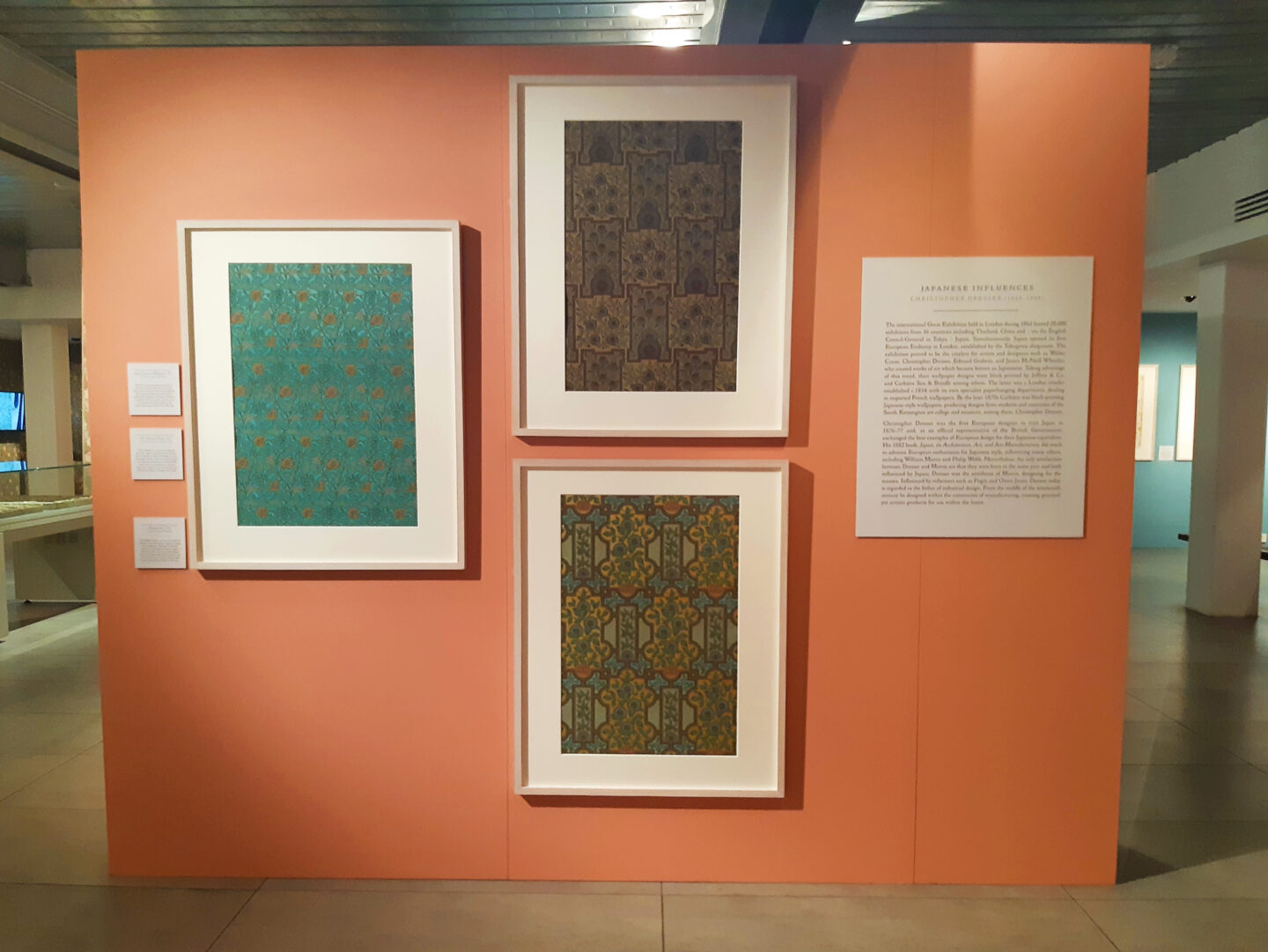 When I visited in May the ‘Art of Wallpaper’ it was nearing the end of it’s three month run at Dovecot studios. The exhibition focused on William Morris’ legacy as both a craftsman, poet, socialist, and pattern designer. Many of the original framed wallpaper samples were exhibited for the first time in the UK at this exhibition. Above are three of the early examples of his woodcut and hand-printed wallpapers for mid-Victorian interiors featuring motifs that he would become famous for; floral and Japanese influenced motifs. 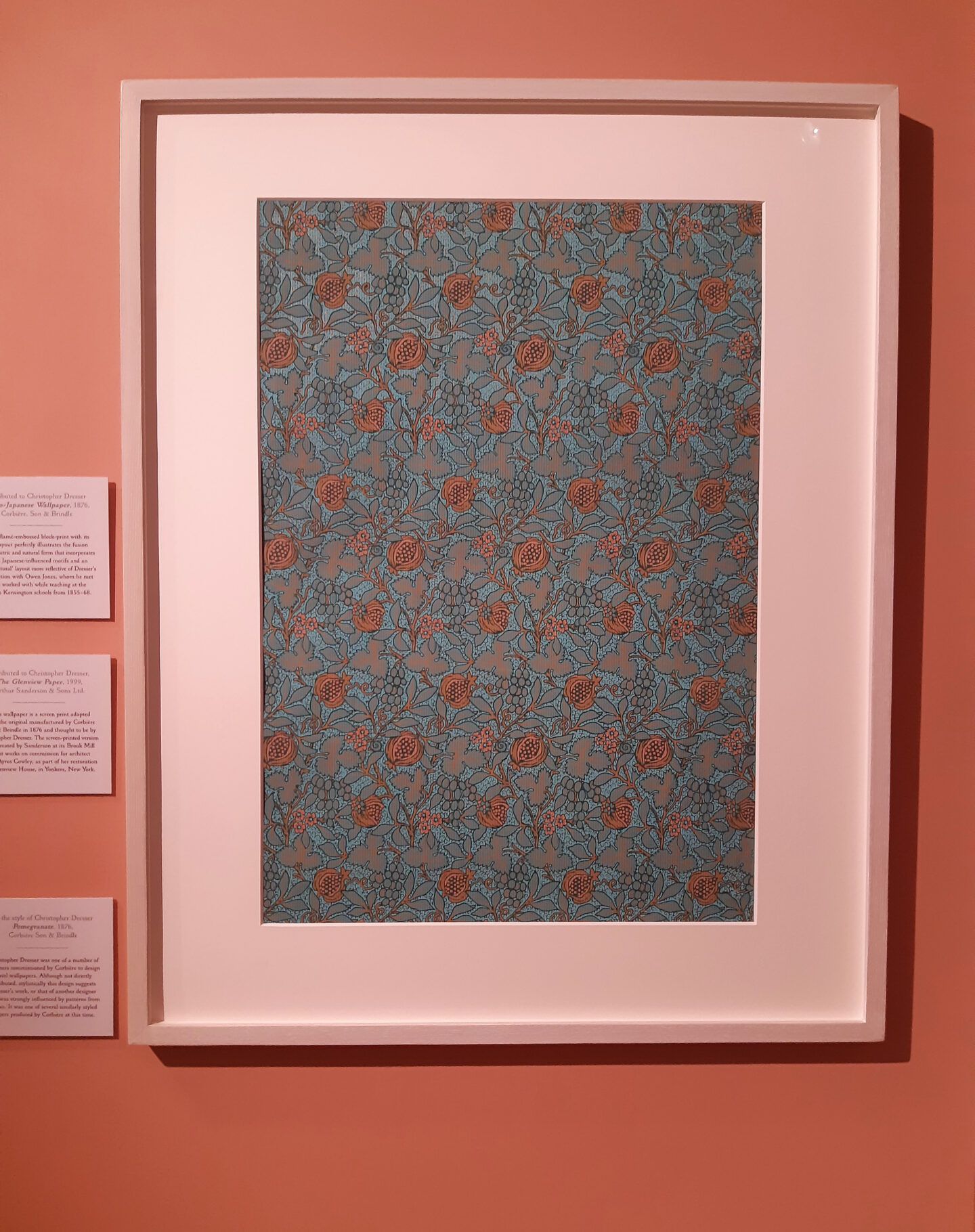 The above framed wallpaper sample of a rose and pomegranate trellises on a turquoise ground was one of my favourite framed pieces. This wallpaper could be used to decorate a twenty-first century house just as much as it did the original Victorian houses that it was originally designed for. The curated selection of wallpapers on display showed the breadth and depths that William Morris’s business ‘Morris & Co’ began to develop in the mid to late Victorian period. The wallpapers covered all tastes including those who would prefer a darker, brocade wallpaper (as seen below) and those that would prefer something lighter (as seen above). 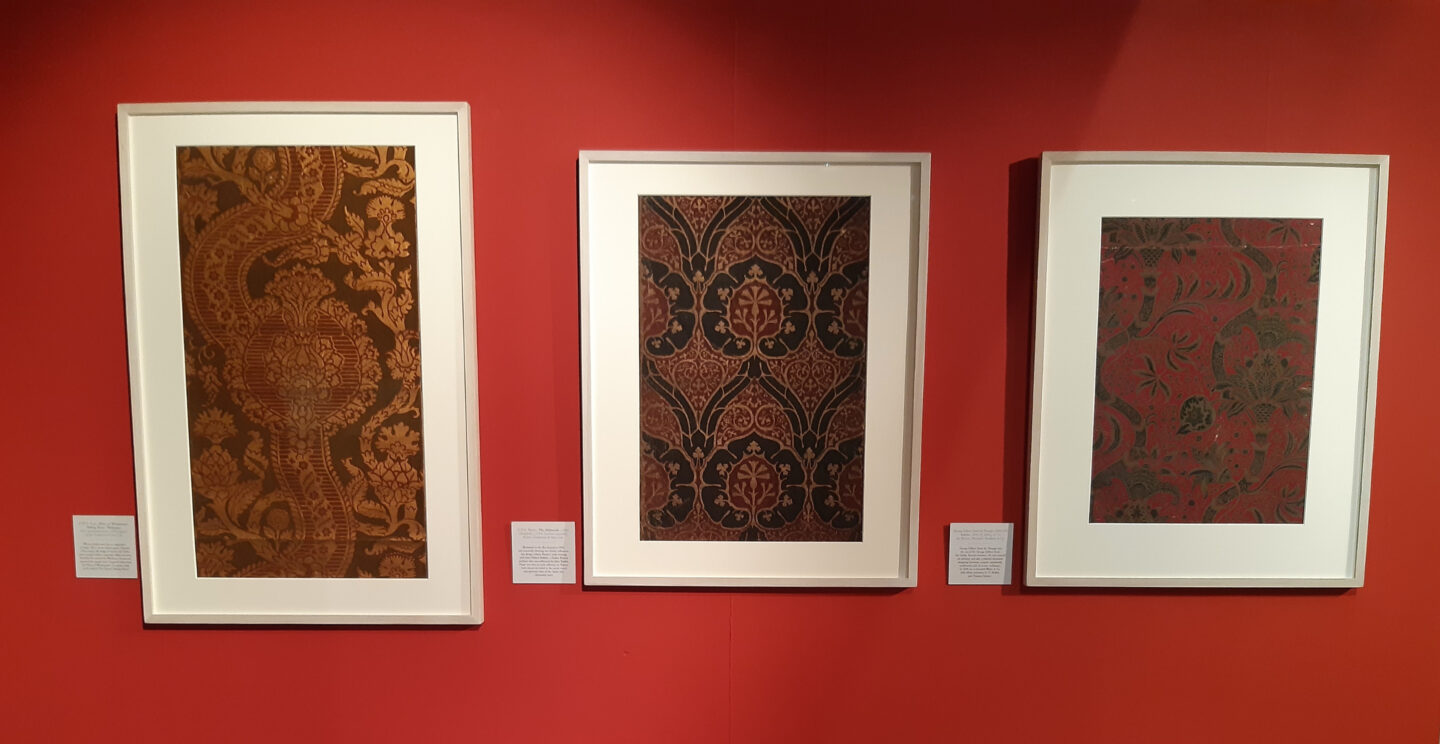 Accompanying exhibition text labels (seen above to the side of each frame) gave the viewer information on the materials used in making the wallpaper, the printing process, the measurements, and the experience behind each framed piece. The text was easy to read whilst also being informative but still accessible to those who were not familiar with Morris’ work before visiting the exhibition. The exhibition space was amply laid out with space for many visitors and disabled visitors alike; the space is accessible up one ramp and there were ramps within the exhibition for further easy accessibility. The frames were hung at wall height with no more than three to six frames across one wall. I felt this was an effective method of curation as this did not overwhelm the viewer as the choice of differing wallpaper prints was astounding. 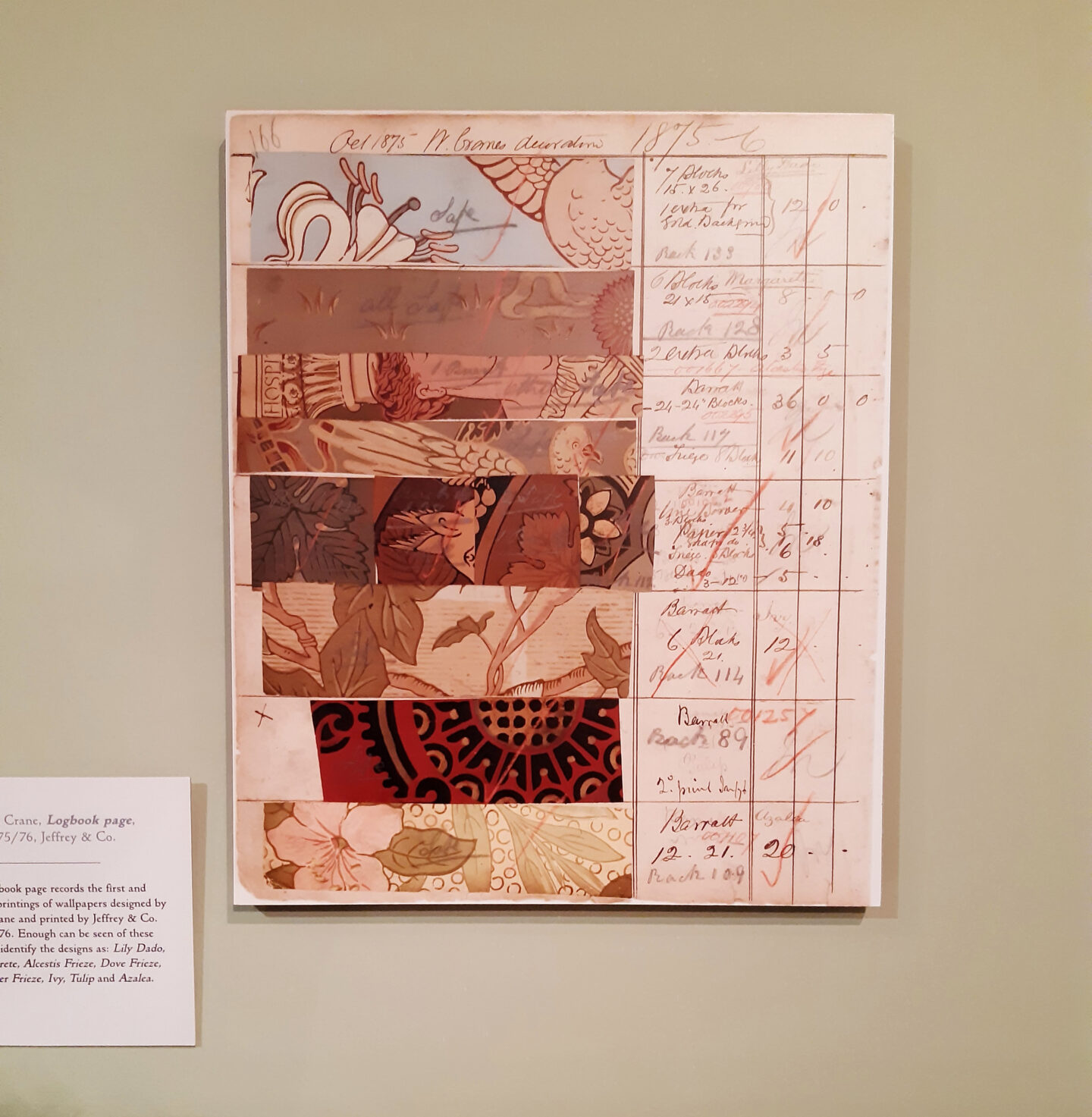 Further exhibition panels discussed the design, painting, printing, and selling process of various prints with high resolution scans from the company’s log books (as seen above and below). Each wallpaper was given a name, a date when it was printed, who bought a roll of the wallpaper and the length of the wallpaper. Alongside the extracts from the log books original printing blocks from the Morris factory were juxtaposed as to give the viewer an idea of how the paper was actually printed. The blocks are square, large blocks of wood with hand-carved designs which were again used to hand print the wallpapers mentioned in the log books.

By including the design process the curator has given the exhibit viewer an idea how labour intensive the making of Morris & Co wallpaper was. Due to the laborious process of creating this type of wallpaper Morris & Co wallpaper was only available to perhaps the upper middle class and upper classes of Victorian society. This is despite William Morris being an intrinsic proponent of the Arts & Crafts movement who emphasised the value of the craftsman over mass produced items made during the industrial revolution of the nineteenth century. This particular dilemma is highlighted within the exhibition and gives food for thought to the exhibition viewer that though the wallpapers were beautiful the making and printing of the wallpapers were completely done by hand by people who could not afford to decorate their own houses with the wallpapers. 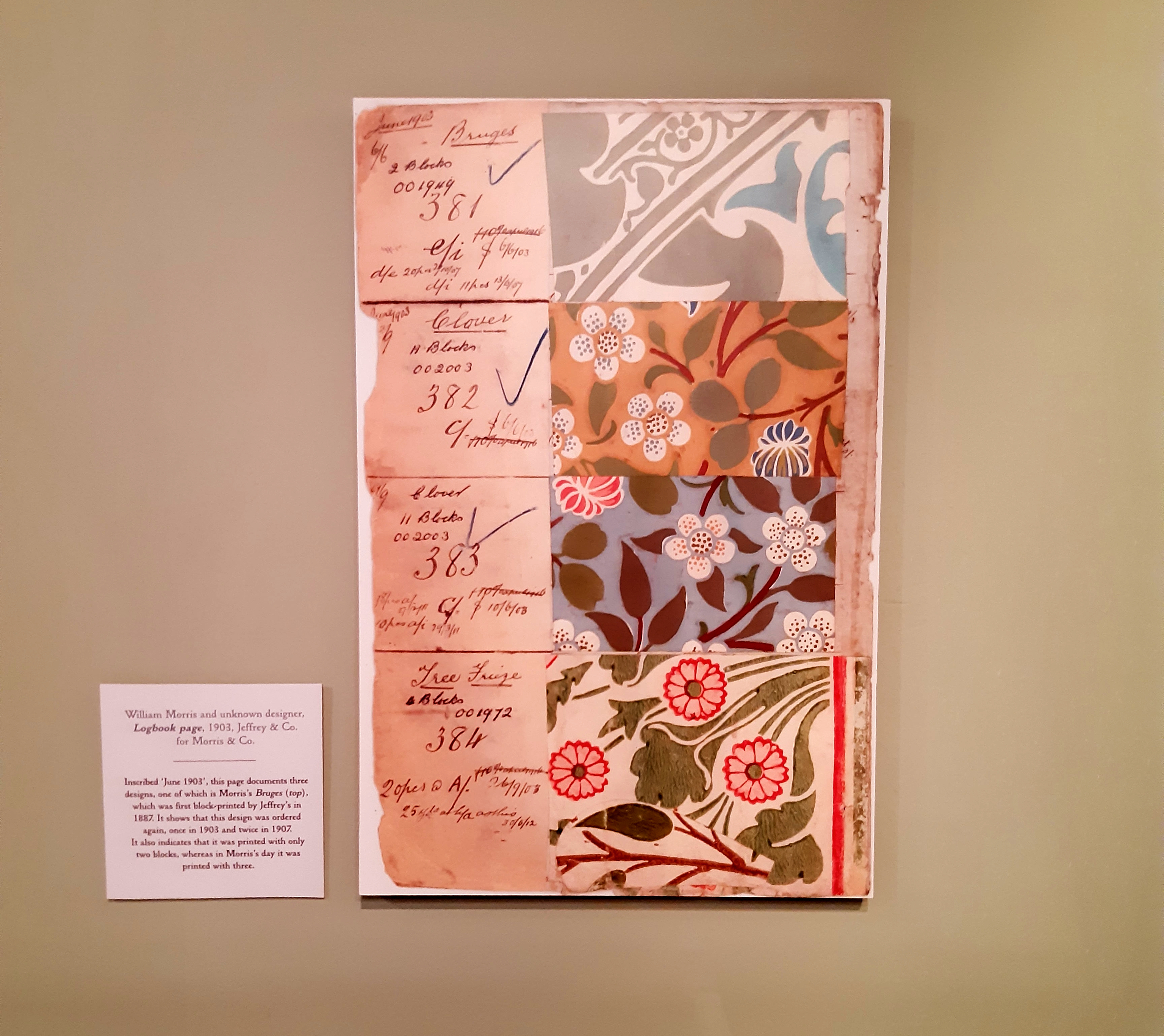 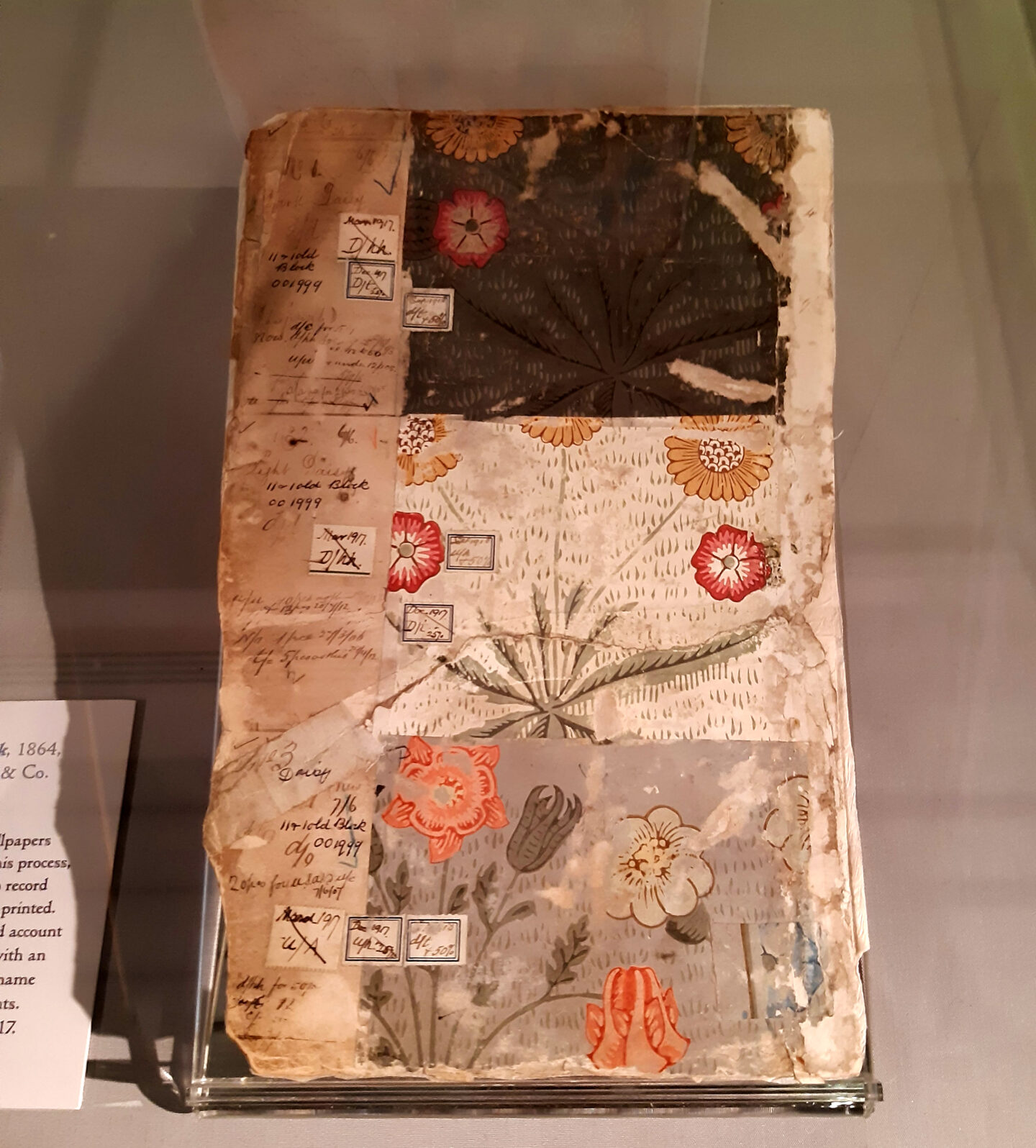 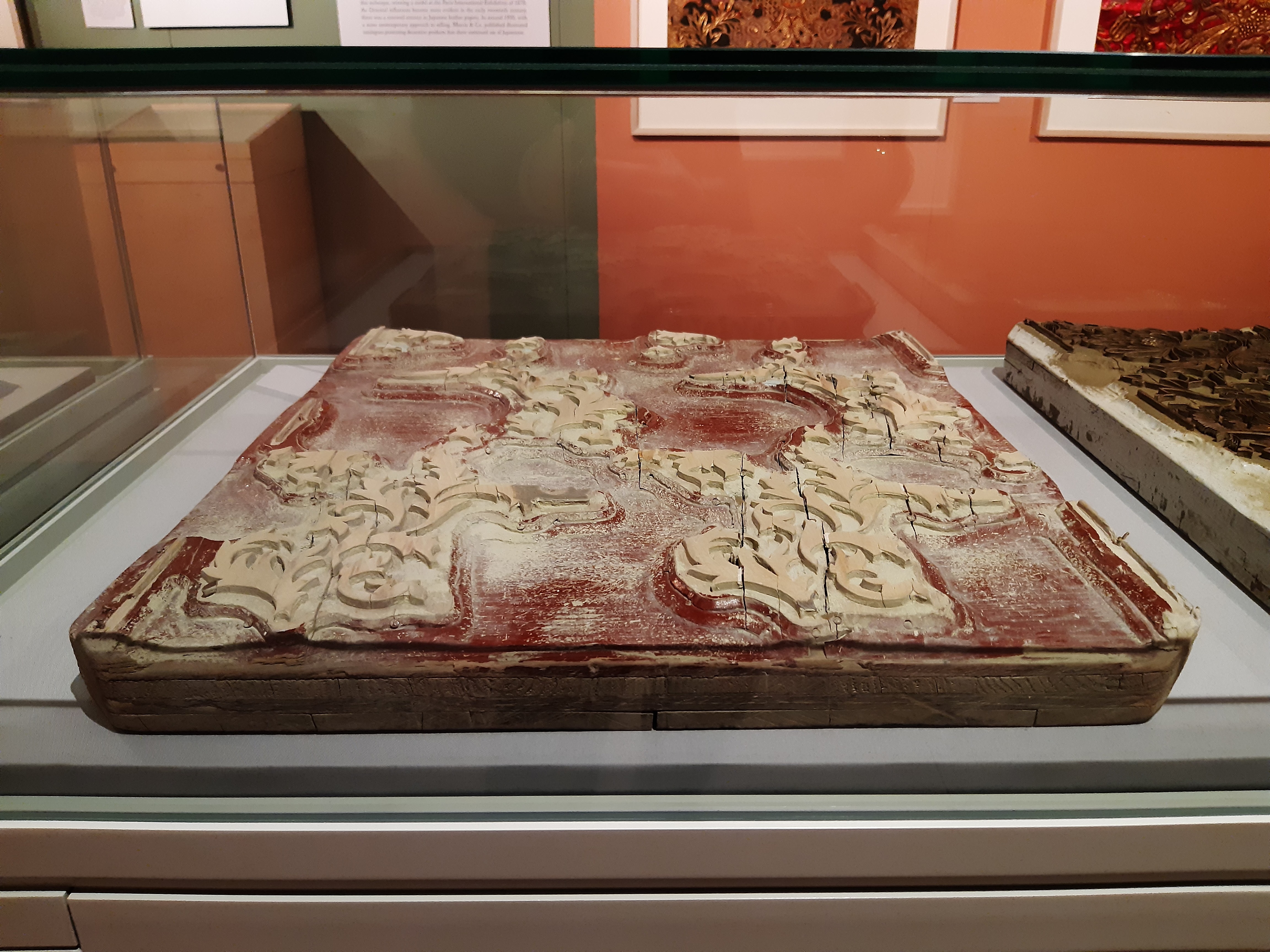 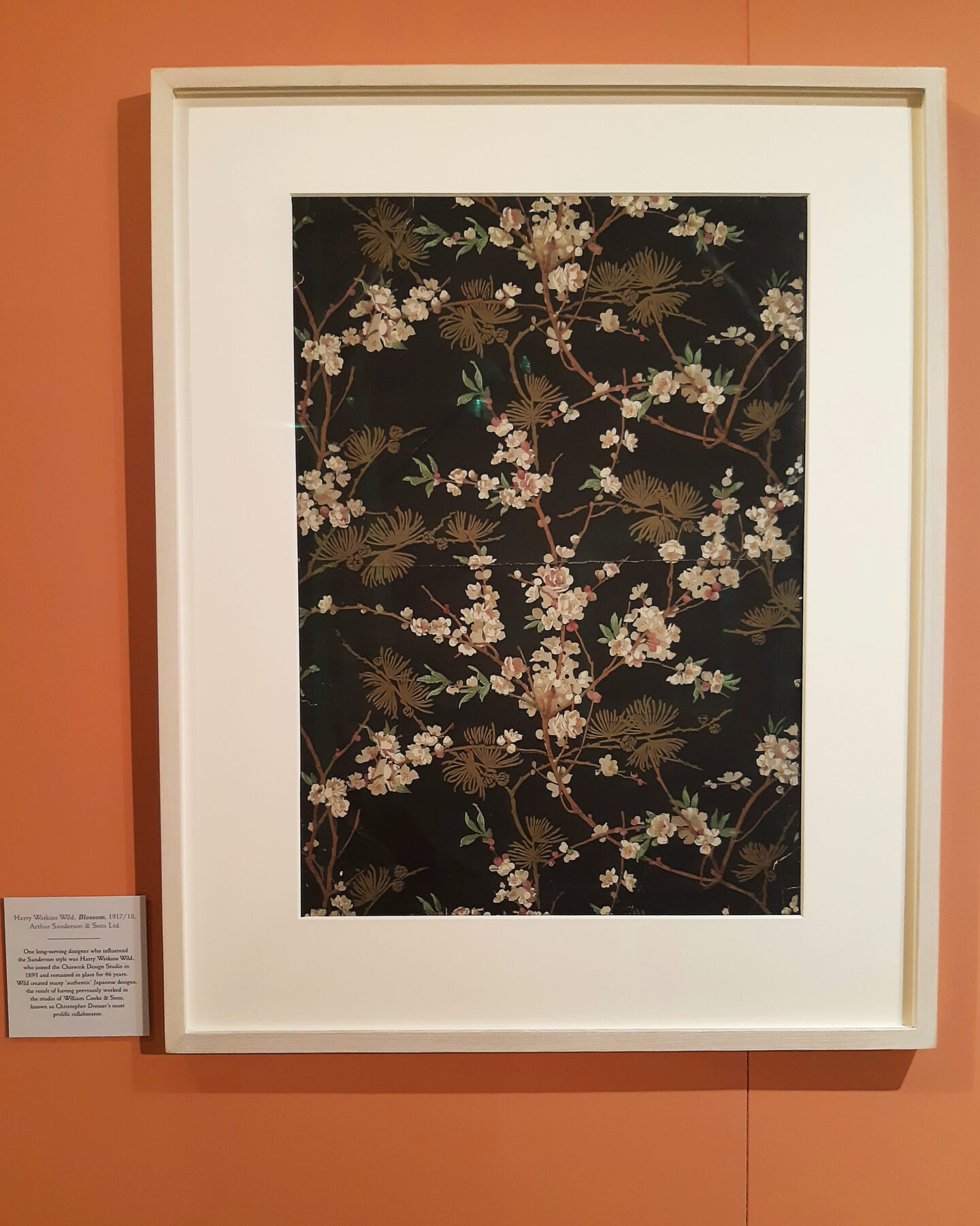 This Japanese influence is particularly evident in this paper above from Sanderson & Sons Ltd of blossom flowers on a black ground. The wallpaper calls to the viewer’s mind the lacquered screens of Japanese influence that were highly fashionable in the mid to late nineteenth century Victorian England. One can imagine this wallpaper in a room filled with Japanese curiosities and furniture. Again, this wallpaper could also be used in a modern home though possibly on one wall instead of papering the entire room as I am sure not every modern home owner would appreciate a room full of this beautiful wallpaper. 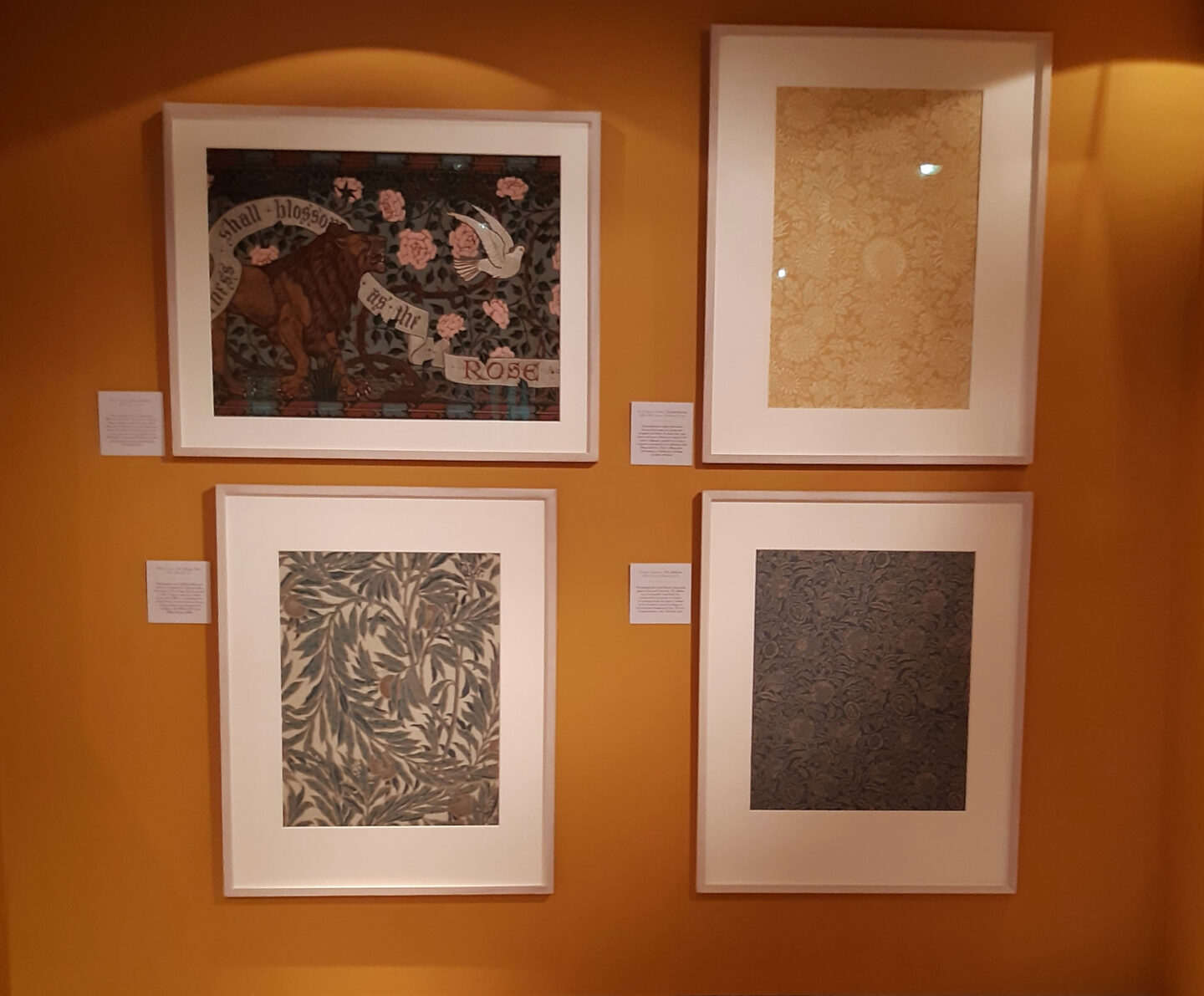 Whilst I meandered about the exhibition something that particularly caught my eye was the curatorial decision to paint the exhibition boards a similar or complimentary colour to the wallpaper samples. One section had predominantly greens and blues against a background of pale green, another blues and golds against a bold blue background, and in this section above a bright tangerine orange that highlights the warm colours in the wallpaper samples. In the section above it was visible to the exhibition viewer that Morris & Co were influenced by a wide variety of artistic influences.

The top left hand picture is clearly influenced by Medieval tapestries and murals, whilst the other three samples are influenced by nature and Oriental influences. One of my particular favourite samples (pictured below) was of the lion chasing the dove against a ground of roses, leaves, and gothic text. One could see this used as a border just below the ceiling in a Victorian neo-gothic country house with the walls adorned with Pre-Raphaelite paintings.

In my next blog post I discuss more of the curatorial decisions, layouts, and my thoughts on the exhibition with more beautiful photographs of wonderful wallpaper to come! 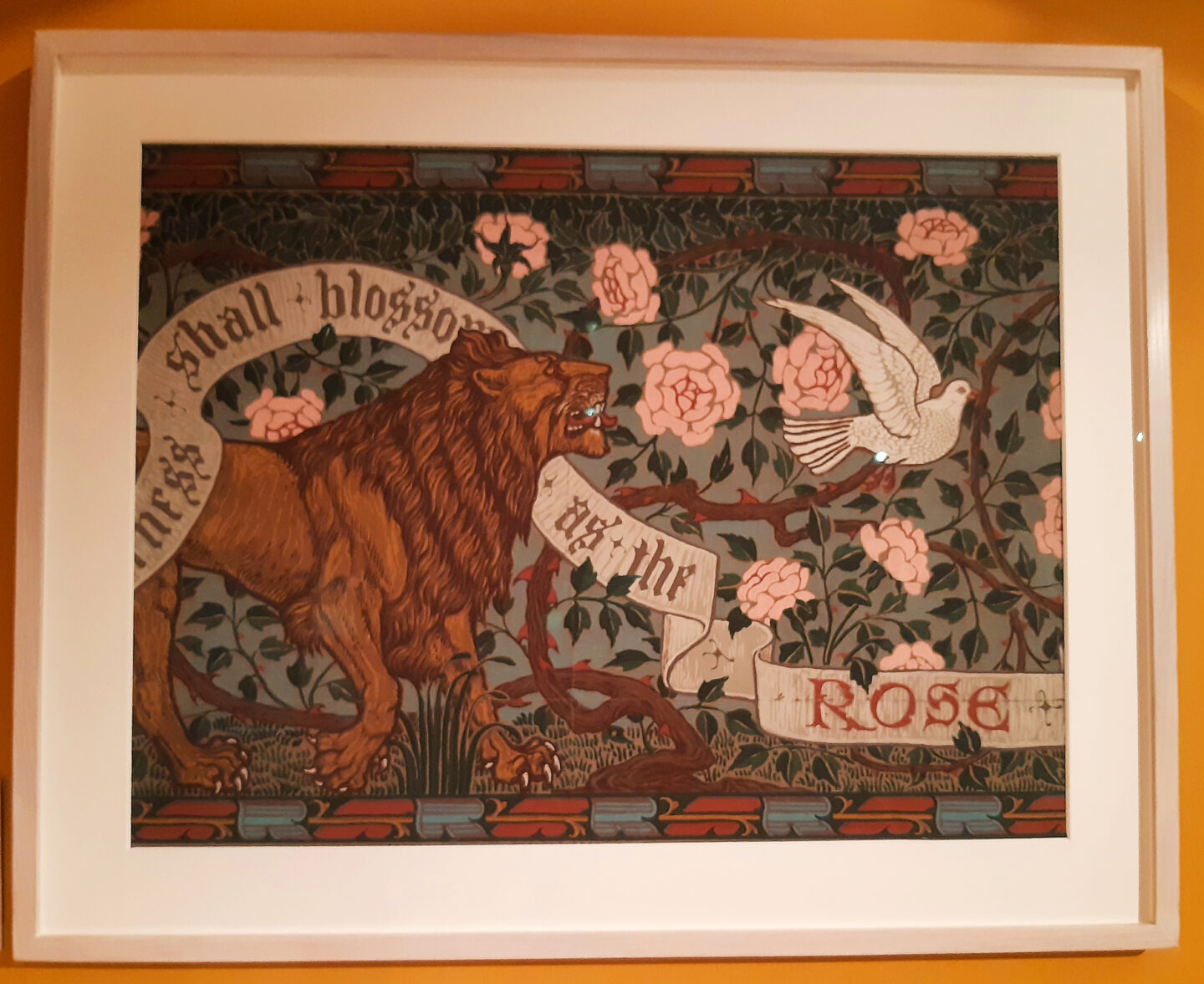